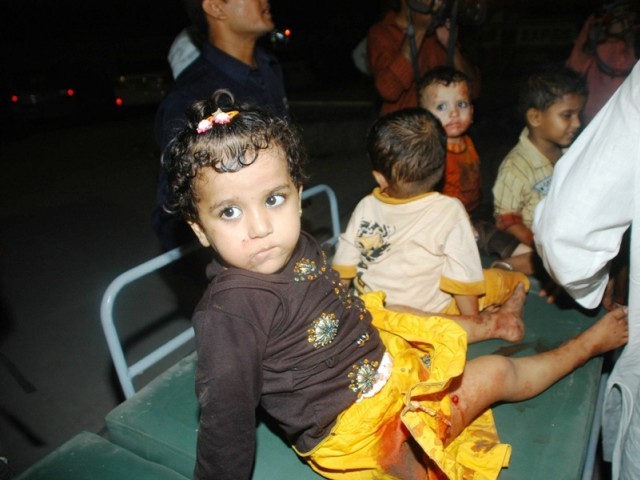 Every Thursday, as the drums would roll, the colourful devotees would crowd, the rose petals would float, the excited children would hop, the cars would swerve, the buses would gather, the food would overflow, the lights would glow, and I would wonder anew at the hospitability and attraction of the Abdullah Shah Ghazi mazaar.

Abdullah Shah Ghazi is said to have arrived from Iraq in the eighth century to preach the brand of tolerant Islam that is still followed by the majority of people here. Many people claim to have been granted their wishes here. Apart from the faithful, there are many who flock the shrine for langar (free food) or to drink from the miraculous holy waters which, they believe, cures ailments.

The shrine has remained a centre of attraction for people belonging to different religions, sects and ethnicities. Looking at the pockets of humanity which crowded the mazaar and spilled over into it’s environs, it was clear that here there were none of the class divisions that bedevil our society. All were welcome at the saint’s abode… the destitute and the rich, the ill and the healthy, the young and the elderly, the careworn and the careless, the morose and the ecstatic.

Legend has it that Karachi did not suffer a tropical disaster in a thousand years because of the shrine’s blessing, because Abdullah Shah possessed the power to control sea waters. Devotees claim that the presence of this mazaar has protected Karachi from a number of tropical disasters, including the recent Cyclone Phet and the 2006 sea-storm heading from Gujarat. But the shrine could not protect itself from all who it has been welcoming with open arms and a big heart for so long. Amongst the swarm of humanity milling around it this Thursday, there were two young men who dealt it the most severe blow it has ever suffered in it’s 1400 year old history. Undeterred by the presence of a large number of women and children and the message of mysticism and peace pervading the air, they chose to kill, maim and destroy.

Memories come fast and furious. An intrepid friend and I getting our hands read, in the glow of a lantern, by a grave palmist squatting on the pavement next to the shrine.  Jaywalking devotees irritating me into honking on Thurdays while trying to get home after a long day at work. Avoiding looking directly at the drug addicts near the Mazaar who would sleep all day and come back to life as evening approached.  The eerie glow of the lights drawing my gaze again and again.  The nearby crescendo of music lulling me into a deep sleep. Visiting the Mazaar with my nervous mother to pray for my brother’s success as he was departing for college. Incense and flowers mixing with the sea air and pervading my senses as I took off my shoes to climb the interminable steps leading towards the saint’s resting place. The serene inner sanctum swarming with curious female devotees. The workers washing the dirt marks on the steps of the Mazaar, forcing us to side step the buckets of water. Now they must be washing the blood stains and body parts off those pristine steps.

On TV, I can’t recognise the darkened Mazaar with it’s abandoned slippers, sandals and flowers. A screaming woman in sequins and red lipstick is carrying her inert daughter. Her frenzied screams  rent the air, but the girl does not stir. Three children are amongst the dead. I turn away from the thought that this devastated woman’s daughter is amongst the fatalities.

Amidst the cacophony of the TV coverage, an image jumps out at me. Bloodied babes. Despite the blood staining their round foreheads and clinging to their curly locks, these traumatised toddlers are not crying.  Silent and clueless, their innocent and unflinching gaze sears my soul even as their panicked mother rushes them to hospital.

The TV anchors and reporters are babbling away, police and rangers are milling about, people are sobbing, ministers are giving their usual statements, shrines are being sealed, bombers’ heads and limbs are being scrutinized, Tehreek-e-Taliban are proudly claiming responsibility for this butchery as if it is a badge of honour, theories are being put forth about how militants are striking at the very heart of Sufism and tolerance…. but it is the silence of these flower like children which resounds within me.