Flappy Bird: The next Angry Birds? 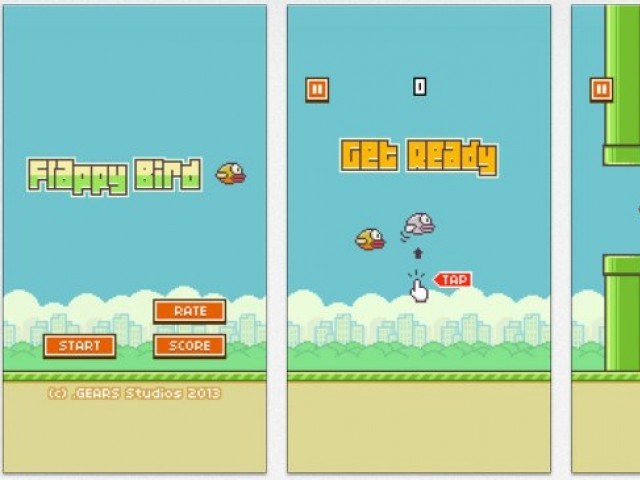 Anybody who’s playing this game doesn’t have the slightest of clue why they are playing it in the first place. PHOTO: SCREENSHOT OF FLAPPY BIRDS

Unless one is living under an omnipresent rock these days, any tech-savvy or a casual mobile gaming enthusiast with internet access would have heard about this new mobile game for Android and iOS called Flappy Bird.

Even though it is touted as the ‘next Angry Birds’ by some, what defies sheer logic and common sense is the prevalent spread of this game on both dominant mobile platforms app stores, iOS Appstore  for iPhone users and Google Play for Android users.

It is painstakingly frustrating and difficult, that too is putting it mildly at best, coupled with retro late 80’s Marioesque and Nintendo graphics to boot. Suffice to say, anybody who’s playing this game doesn’t have the slightest of clue about why they are playing it in the first place.

A screen shot of the game

The game lacks depth and story-driven missions and its imagery and polygons only qualify as ‘cute’, by any stretch of one’s imagination.

The underlying premise of the game is that you’re a poorly pixelated bird and you have to tap on your Smartphone screen which will enable the bird to flap its wings to avoid collision with certain green pipes, which will remind you of Super Mario, where the Italian plumber goes to find gold coins.

While Flappy Bird’s game mechanics are relatively straight forward and simple, the game itself is not a walk in the park. It will take expert timing, with off course trial and error approach and immense patience in order to persevere and overcome this game.

Another reason why this game has gone viral in such a short span of time is because it is the 360 degree polar opposite of what other popular run of the mil mobile games are these days.

The emphasis is on the fact that this game is not developed by some +AAA game publisher, such as Kings (Candy Crush), Zyngas (Texas Hold’em) or Rovios (Angry Birds) of the mobile gaming world. This game is developed by a Vietnamese independent creator Dong Nguyen, under the name of dotGears studio. Without any vast resources at their disposal, in contrast with major game developers who have millions dedicated to their gaming projects, the results obtained should not shock anyone. Perhaps that is the reason why this game might exude this unpolished persona as a whole.

Difference of graphics between Angry Birds and Flappy Bird.

In terms of mere facts and figures, if we were to gauge how successful this game has become, it has crossed 50 million downloads and has generated $50,000 per day, in terms of ad revenue.

This game will give you random fits of rage and stress when you are playing it and then some casual hair pulling can also be predicted. Luckily enough, this game is absolutely free for Android and Apple users, so if one is curious and looking forward to decipher the enigma that is Flappy Bird, they should head to their respective app stores to download this game.

But one ought to bear in mind the basic and rudimentary fact beforehand – this game is not just difficult, it’s more like finding-a-needle-in-a-haystack difficult or trying to pass a thread through a needle all the while trying to drive a vehicle difficult!

One millisecond of distraction and your game is over.