Metro bus service in Rawalpindi and Islamabad: A blessing or a curse? 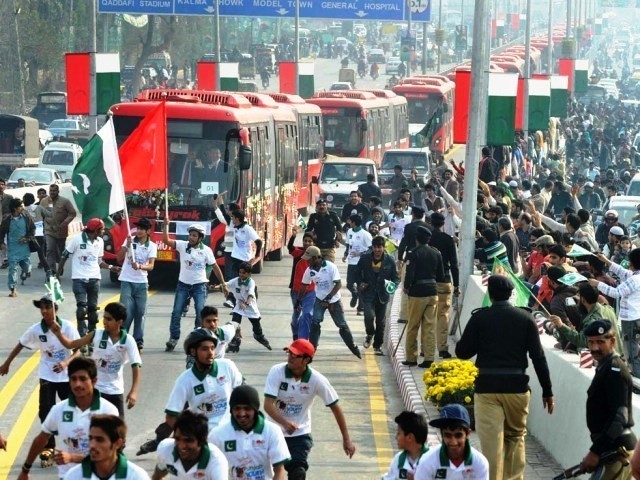 The metro bus service doesn't seem to be beneficial in the short-term or long-term for the citizens of the twin cities. PHOTO: NNI/FILE

The Punjab cabinet approved the extension of the metro bus service to the twin cities of Rawalpindi-Islamabad in its recent meeting. When the PML-N won the elections back in May 2013, I had hoped that this was one election promise that they wouldn’t fulfil since the intended goal can be achieved via several alternative solutions.

However, I guess since they couldn’t deliver on their electoral promise of ending power outages in six months, he has decided to give the twin cities a metro bus service.

Politics aside, it makes little sense to have a mega project like the metro bus in Rawalpindi-Islamabad.

According to population estimates, Lahore has an approximate population of 10 million while Rawalpindi’s population is touching two million. Any rational mind would understand that the solution for Rawalpindi may not be the same as that for Lahore given the vast differences in the demographics and layout of the two cities.

Being a resident of Rawalpindi, I agree that there exists a major deficiency in the public transport system of the twin cities. A large chunk of Rawalpindi’s population has to go to Islamabad for work, education or business on a daily basis. People are hard pressed for transportation options since there aren’t many. Women, in particular, who have to travel to Islamabad face quite a bit of inconvenience.

But is the metro bus really going to solve the problem?

According to the proposed plan, the Rawalpindi part of the project will begin from the Flashman’s Hotel on Mall Road and end at the Faizabad flyover, thus, serving residents of the adjacent areas of Murree Road.

It is obvious that in the short run, it is going to cause immense discomfort to the residents of the two cities. After all, Murree Road is the backbone of Rawalpindi’s economy. It is the feeding artery for areas far north and down towards the Potohar region. With construction of the metro bus route, there will be a major impact on businesses, which have already been adversely affected by sectarian clashes at Ashura.

Moreover, commuters avoid the Peshawer Road these days due to expansion work being carried out on the Kashmir Highway. When construction begins on Murree Road as well, the 150,000 people, which the metro bus aims to cater to, would only be using one road to travel between the twin cities – the Expressway. With new colonies going as far as the Grand Trunk (GT) Road on both sides of the Expressway (Gulberg, Bahria, Soan Gardens, DHA), it already faces the worst kind of traffic jams during rush hours. So imagine the chaos that will ensue when all of Rawalpindi and Islamabad will be using just this road.

Even the forecasted long-term impact does not justify the whopping Rs34 billion investment required for the bus service. The government of Punjab has already spent more than three billion rupees in the past two years while trying to solve the traffic problems on Murree Road. It started with the Chandni Chowk flyover, completed in March 2012 at a cost of Rs1.25 billion, followed by the Sixth Road flyover, completed in January 2013 at a cost of Rs1.042 billion.

Another project – the expansion of the Marir Hassan Chowk – started in November 2012 at a cost of Rs429 million and was due to be completed by March 2013 but it still awaits completion with a revised cost of Rs549 million.

These projects did not result in electoral success, which was the likely intention, nor did they solve the traffic problem since the government is now planning a metro bus service on the same route.

Someone must be held accountable for the Rs2.85 billion which went to waste on these projects while the traffic problems still persist. In addition, the bus service will have a massive environmental impact and destroy Islamabad’s beauty which is already threatened by the increasing urbanisation and construction.

And all the government would need to do is float tender inviting quotations from interested parties. This way not a single penny of the taxpayers’ money will be involved.

Another pressing issue is the revamping of the Rawalpindi traffic police. The traffic wardens introduced a few years back have failed to deliver. A glaring example of their incompetence is the Ammar Shaheed Chowk which is a roundabout with traffic lights and traffic wardens – the only ones you will find anywhere – and yet, the traffic is still stuck most of the time.

In view of all the above reasoning, I sincerely hope that someone will consider the cost-benefit analysis of this project before investing such a huge amount of the taxpayers’ money.

Recently completed his Bachelors in Economics from the NUST Business School and has an interest in urban planning.