The serendipitous serenity of Swat Valley 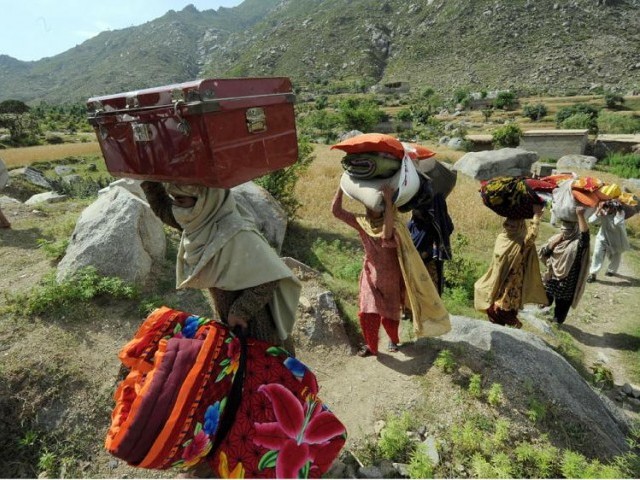 Displaced Pakistani people leave from Buner on May 8, 2009 during a military operation. PHOTO: AFP

Swat was a land alien to me, until I got the chance of visiting the beautiful valley with my brother and a friend. We decided to take a bus to Mingora and then travel on our own from there.

The image I had in mind of the valley was a Kashmir-ish land, in internal turmoil, as the people struggle to keep their cool with the military and radical presence. I was prepared for an unwelcoming vibe from the locals.

However, while we bargained with a local Hi-Ace driver, Abdul Rashid, to give us a short tour of the land, his demeanour and polite behaviour made me realise how wrong I was about the people there. I found the locals to be very welcoming and friendly. Perhaps Rashid’s niceties were in place only because we were about to become his potential clients, whom he’d overcharge and then laugh about it with his friends later on. But seeing the people around me, in their happy disposition, I decided to discard that thought.

Given the fact that it was the last few days of January, there was very little greenery to be seen and the streams ran shallow and calm. The orchards were getting ready for spring and everyone seemed to be on their feet, preparing for the coming season.

Hence, other than the brown mountains that outlined the valley and the empty orchards, there wasn’t much to see. So we took to exploring the culture and the people, and left the land exploits for our next trip.

When we reached Swat, the valley was undergoing a massive reconstruction and risk-protection development project, fuelled by the Pakistan Army and funded by contributions from different local organisations in Pakistan and by foreign countries as well, especially the United Arab Emirates (UAE) and Germany. At the core of all these efforts lay the will and energy of the local people of Swat to help make their valley blossom again.

Rashid is a local Pathan from Mingora and as we took a bumpy diversion by the Swat River, where a new road was under construction to compensate for the one lost in the 2010 floods, Rashid remarked in a sad voice, with that unique Pukhtun accent,

“First came the Taliban, then the terrorists and then began the military operation. After that, we saw the floods. God has put us and the valley through many grave tests.”

We were interested in listening more about the military operation and the Taliban’s presence in the area, and it seemed that he too wanted to discuss it. However, once he began narrating the stories, it was really hard for us to understand what he was saying because he was talking too fast and too loudly, out of his passion for all that had happened.

We got to know that the local people’s sentiments towards the 2009 military operation were mostly positive.

The following has been paraphrased and translated from one of the conversations I had with Rashid.

“We were forced to leave our homes and our lands due to the military operation. We were stranded and homeless and in a much warmer land of Fateh Jang, which was unbearable for my father as he had lived in Swat all his life. Then someone told us about a registration scheme for displaced people like us, so we went to Islamabad and got registered. We received monetary assistance and ration as well as guidance regarding temporary housing.

We thought that was it; that we will have to live like this now and we would never be able to return to our land. My father asked me to take him back – he couldn’t bear the heat. He said he’d rather die as collateral damage of the military operation than to die of this heat. But all the roads were closed.

We thought we would never see our lands again and our property would be lost – homes robbed and orchards devastated. But finally, when the military operation ended and they had saved our lands, we were invited back. My home was untouched. It was exactly as I had left it. Plants had crept up though and there was rust almost everywhere but our valuables and belongings were still there.

We were greeted by the Pakistani Army with juices and sweets and it felt so good to be home. Since then, we have been working to rebuild and rehabilitate our land and the government, the armed forces and the police have all been helping us. We, as a community, are grateful to the military for the freedom of our land from those foreign insurgents; they were not a part of us.”

But of course, there are always two sides to a story.

Graffiti on a shop shutter in Swat. Photo: Junaid Ali

On my way back to Rawalpindi, I came across a passenger sitting next to me who was also from Swat. He told me that he did not leave his house during the operation and had stayed at Batkhela with his family; according to him, the Taliban weren’t as bad as they were portrayed.

I felt a little uneasy while talking to him. His thick black beard and stern voice conveyed a silent disapproval of my poorly trimmed goatee. He added,

(They placed a ban on drinking alcohol; what was so wrong in that? They only perished an evil. Now see what is happening in hotels these days. If one car would be parked out of line, they would beat the driver up, so that the next time he would park it correctly. They maintained discipline in the land.)

His opinion hinted upon his inclination towards a hard-lined, authoritarian form of governance. Such ideals were not in line with my own and I thought it best to keep the conversation short.

It was strange how two people, belonging to the same land, had such differing views.

The people of Swat have gone through a lot and seeing their resilience in developing themselves and establishing their presence again makes me feel hopeful.

I plan to visit the beautiful valley again, during the summers, when there is greenery everywhere and the fruits are ripe. Perhaps by then the area would be more developed and we might come across more stories regarding the operation and the Taliban’s prior hold on the area.

An unemployed pilot who likes to travel with a pen, a paper and an utterly useless camera, he tweets as @junaidstweet (twitter.com/junaidstweet).