The right to write: Denied! 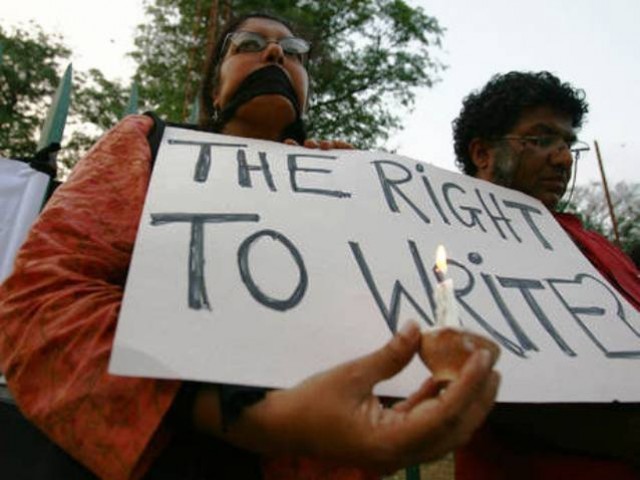 As disseminators of events, journalists play the key role of informing the public and keeping us abreast of the latest developments. PHOTO: REUTERS

Journalism – a profession of disseminating news – has attained the status of an endangered profession globally. Incidents of violence and state sponsored prosecution attempts against journalists have become a de jure way of life for many. Prosecution and persecution to some degree, comes with the territory, if you will.

This is unfortunate considering the burden that falls on a journalist’s shoulders.

And what is this trial in Egypt for, in the first place? To report what is being seen?

Since when is an eye witness account of events an indictable offence?

I believe this is a gross transgression against the very principles of justice and fundamental human rights.

Journalists are a key pillar of the civil society. They form a barrage of accessibility between citizens and the government. As disseminators of events, journalists play the key role of informing the public and keeping us abreast of the latest developments.

State-sponsored prosecution is also a needless waste of precious resources because of social media. Social media is now widely recognised as a platform where news breaks first and fast. The Egyptian authorities and all other governments should realise that the penetration of social media makes any attempt to censor information an exercise in futility – a waste of precious state resources that could be better utilised elsewhere.

I don’t think that governments realise that the days of keeping the public in the dark are history. The years when the public would be misinformed or uninformed are way past us and people in current times would have it no other way. They would fight till their last breath to ensure that they are fed with timely news.

After all, people are the prime guarantors that sustain governments. No people, no government, no state – period.

With respect to Pakistan, I was astonished to discover that there is no law other than the fundamental protections in the constitution, which explicitly protect journalists against government intervention. Concepts such as reporters’ privilege and shield laws are completely absent from Pakistani repertoire which I found to be quite surprising.

While the United States was quick to pass a legislation called the Daniel Pearl Freedom of the Press Act, as a consequence of the inhumane murder of Daniel Pearl, the issue has yet to catch the attention of Pakistani authorities. This is all the more a source of both astonishment and embarrassment when we find that the South Asia Media Commission (SAMC) and Reporters Without Borders both rank Pakistan at the top of one of the most dangerous places to work in for a journalist.

Since the government already falls short of its prime mandate to ensure safety of its citizens, let’s not even get to how such a law – that explicitly protects journalists – would ever get implemented, if at all passed. So, let us discuss another dimension of the issue – how to ensure that journalists are protected from the intrusion of government.

Let us be quite blunt about it.

Why journalists continue to get killed is more a factor of how the Pakistani society operates than a mere lack of laws. Legislation is not a substitute for realising that each person has a right to his or her own opinion and under no circumstances, can that be used against that individual. Voltaire probably articulated it best when he said,

“I do not agree with what you have to say, but I’ll defend to the death your right to say it.”

This attitude of utter disregard for the opinions of others is reflected all around us and the higher up one is in the social chain of class, the more vocal he or she usually is in ensuring that theirs is the only opinion that is either heard or implemented. I doubt that I need to go into examples to prove this point.

And hence, journalists will continue to be in the line of fire till the day dawns where we learn to respect the views of others, even if it means taking them with a pinch of salt.

Nonetheless, this does not mean that the issue should not be addressed legislatively. Therefore, the government should immediately enact a law via an ordinance that follows the UN’s Universal Declaration of Human Rights with strong penalties and repercussions for its violation. It should also enact provisions that expedite the investigations related to events of journalists’ intimidation – whether verbal or through collective assault mechanisms such as attacks on the workplace. Speedy trials should also be a priority in such a law.

We must recognise that the protection of journalists is vital to safeguard the larger interests of the civil society. As such, an issue of such a magnitude is best tackled within the domain of constitutional law.  As the world shrinks figuratively, the action by the authorities in Egypt against the Al Jazeera reporters becomes a litmus test for us all to check whether journalists are being fairly treated.

If not, the governments must do all that they can to ensure that journalists are given protection and fair treatment.

This is in the interest of all.