Is Islam better practised in the West? 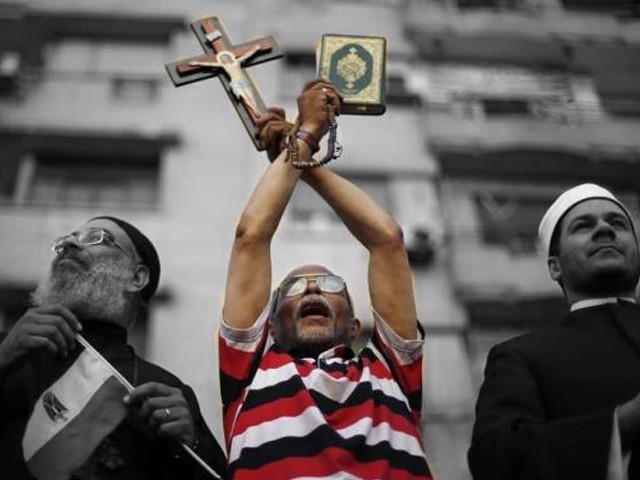 Freedom of religion and from discrimination plays a huge role in Western society. In Islam, there is no compulsion and all religions must be respected. PHOTO: REUTERS

Most people are very quick to point out the flaws and imperfections of Western lifestyle, citing promiscuity, free flowing alcohol, homosexuality, gay marriage and a free mixing of sexes as the main ingredients in its destruction and thus its aberration from Islam.  However, I personally think Islam is implemented in a much more effective manner in the West than it is in Pakistan.

Well for several reasons – the social welfare system, the cleanliness of streets, the unacceptability of discrimination, the freedom to practice your religion and a system which protects women and recognises their rights as commensurate with men.

By social welfare, I mean the wide array of benefits which are given to people who have trouble finding a job, are constrained due to disability or have excessive childcare costs. They even go to great lengths to provide pensioners ease of mind, like providing free public transport and even insulating their homes for free so the harsh winters become more bearable.

This system resembles Zakat (almsgiving), which encourages Muslims to contribute a portion of their income to help the poor and needy. Although the social welfare system in the West can be grossly abused, it serves a positive benefit, especially to those who are not able to find a job through conventional means or due to a lack of education.

Cleanliness plays a huge role in Islam. Purifying oneself doesn’t involve spiritual cleanliness only but physical as well. In Pakistan, often one can see the insides of people’s homes sparkling clean but find heaps of trash on the streets which are peppered with young children sifting through it to find something worthy of resale.

In the West, it is the responsibility of the state to provide clean and sewage-free streets as there is a threat of disease spreading. In Pakistan, no authority provides any adequate provision for removing garbage from the streets. How can we call ourselves Muslims when the stench of garbage is so high?

Freedom of religion and from discrimination plays a huge role in Western society. In Islam, there is no compulsion and all religions must be respected. In Islamic history, Christians and Jews preferred to live in Islamic lands because they were treated with respect and allowed to practice their religion freely, in exchange for a tax. In Pakistan, ethnic and religious minorities are facing such intense difficulties in practising their religion.

False accusations of blasphemy and the threat of riotous persecution loom over Christians, Hindus or Sikhs living in Pakistan. Out of fear, many non-Muslims convert to Islam so they may feel accepted in society.

Although far-right groups do exist in the West who promote intolerance and spread hatred, it is still against the law to incite religious hatred and freedom of religion is even protected in the European Convention on Human Rights. Mosques, gurdwaras and temples are spread out all over cities in Western countries and many people carry out their acts of worship without facing any kind of backlash.

When will such a peaceful environment exist in Pakistan?

Lastly, women’s right to education and the ability to pursue a career without facing sexual harassment and discrimination is an important cornerstone in Western society. Of course, sexual harassment still happens but there are measures put in place to prevent it from happening and women are well aware of their rights.

Women in Pakistan are not always aware of their rights and sexual harassment is considered as a taboo subject, one not to be broached. Also, in our society, women are often blamed for making a man commit sexual abuse and women who complain about perverted men are usually told that ‘men are born like this’ instead of stopping them from doing their wrongful acts.

Feminism and the suffragette movement served a useful purpose in raising a woman’s identity that is slowly being quashed in Pakistan through acid attacks and gang rapes.

These are just a few examples of how I feel Islam is better practised in the West. There are numerous others.

There are still many social diseases in the Western culture which remain part and parcel of that society. However, the essence of Islam is followed far more closely in the West than in Pakistan; all that remains is full implementation.