The Taliban must not be painted as violent savages 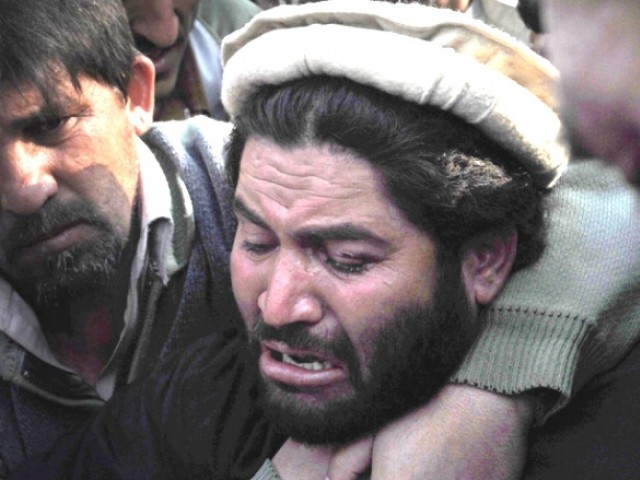 Prime Minister Nawaz Sharif must understand that any large military operation will be unable to sift between terrorists and non-combatants. PHOTO: AFP

“You have no option but to take direct military action.”

This was the advice given by John F Kennedy’s top military aide at the height of the Cuban missile crisis which brought the world to the brink of a nuclear war.

The future of the world hinged on Kennedy’s acquiescence. After the Second World War, global politics were dominated by the political, ideological and power clash between the Americans and the Soviets. Communists were painted as violent savages to the Americans who were made to fear communism. However, the idea of communism gained ground in Eastern Europe and the Soviet Union grew as a global superpower.

Following multiple insertions into Cuba and the disaster at the Bay of Pigs, the Soviet Premier Khrushchev, placed nuclear missiles in Cuba, despite reassuring Kennedy that he will not do so. Kennedy had publicly proclaimed that placement of nuclear missiles by the Soviet Union close to the United States would give the United States no option but to go to war. So, when a US U-2 spy plane discovered the missiles in Cuba on October 14, 1962 the world waited with baited breath.

Today, the people of Pakistan are looking towards its own leader – Prime Minister Nawaz Sharif – to make a decision on how to deal with the increasing threat of the Tehreek-e-Taliban Pakistan (TTP). Last week, the prime minister officially constituted a formal committee in the National Assembly tasked with holding peace negotiations with the TTP. The country finds itself divided between people apologetic to the Taliban cause and people antithetical to their very existence.

Hence, the TTP and the government both, find themselves on the battle ground firing shots waiting for the other party to blink while the rest of the country prepares for war.

People against a military operation make the practical argument of the potential of a TTP backlash but the humanistic argument has lost its momentum after a string of violent attacks by the TTP. Although the power brokers of the TTP and their actions are reprehensible, any large scale military operation will be unable to sift between the terrorists and non-combatants. In a country where death comes aplenty, any collateral damage is accepted as a necessary evil.

It seems that the very idea of Pakistan has been hijacked by a select few and military force is used against any detractors. And it is ironic to see this in a country formed by millions of people who sacrificed themselves in the hope of freedom.

With the memory of Bangladesh fresh in our minds, our country faces the prospect of another civil war.

The control of power does not necessarily give one the right to exercise that power and the monopoly of violence afforded to the state must be exercised with extreme caution. John F Kennedy took that caution when he negotiated peace with Khrushchev and averted a potential nuclear war. Although the United States has not been as cautious in exercising its military force on other countries in the recent past, military action against citizens of your own country is almost inconceivable in much of the developed world.

The idea that Pakistan can eliminate any future threat of terrorism through military force is unjustifiable. Extra-judicial military force and collateral damage to entire communities will only result in more people joining the cause of terrorists. It will just create more martyrs for people to rally around.

It is next to impossible to sift between terrorists and non-combatants on the ground through drone attacks and airstrikes. Despite the best intelligence, the risk of collateral damage is too strong.

Nawaz Sharif finds himself in a Catch-22 position and he truly cannot come out as the winner in this situation. It will be extremely short-sighted for any committee to focus merely on preventing terrorist attacks in the short-term. Instead, the strategy should be to wage an ideological war to win the hearts and minds of people – people who have historically fought valiantly for Pakistan and most of whom have taken up arms only after losing loved ones to drone strikes or after being misguided by people using religion to further their own political motives.

The acts of the TTP are condemnable and any form of terrorism anywhere in the world must be heavily criticised but the rule of law dictates that only people responsible for the acts must be brought to justice. After our failings in Bangladesh and continuous military involvement in Balochistan and Kashmir, our government and military needs to be extra careful to avoid triggering any form of genocide in the province of Khyber-Pakhtunkhwa (K-P) or there is a risk of an all-out civil war breaking out in the country.

Yes, the state must not be threatened by violence by any anti-state actors but as Kennedy showed us, sometimes acknowledging the other is the first step towards understanding the other. Thus, the rhetoric of painting the other as wajibul qatl (worthy of being killed) or a violent savage to support military operation must stop.

The question now is, can Prime Minister Nawaz Sharif be our John F Kennedy or will he be just another General Yahya Khan?