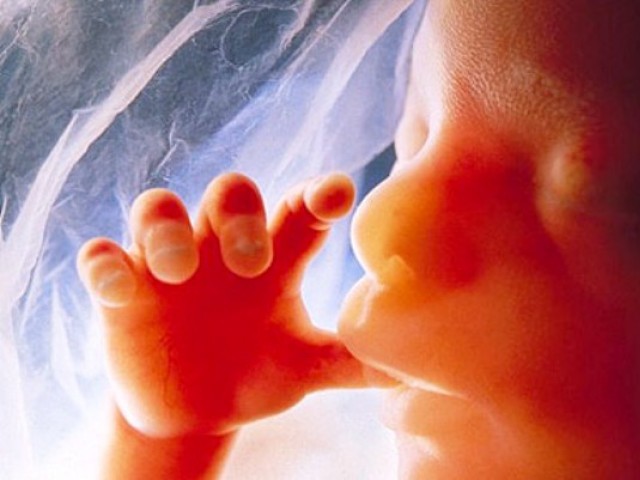 What can be more violating to the dignity of human life than parents killing their own children when there are effective and safe measures of birth control available? PHOTO: REUTERS

“If men could get pregnant, abortion would have been a sacrament.”

My maid refuses to take any birth control measures because her husband considers them to be a ‘yahoodi saazish’ (Jewish conspiracy) to sterilise the ‘flourishing’ Pakistani nation – just like the superstitions concerning polio drops.

However, she doesn’t mind going to the local dai to get an abortion – illegally of course. When I admonish her and tell her that she will get herself killed, she replies,

(Ma’am what do you know… she is very experienced. A lot of women come to her and apart from a few, none have died.)

Her statement was a sad reminder of the secondary status of women in our society. So, out of a little curiosity and some fear for my poor maid and others like her, I decided to see for myself who this ‘experienced’ lady named Rasheeda was – apparently the ‘messiah’ of the lower class women of the area.

I knew that she was a midwife at a local clinic and that she did not see patients without a reference as a measure of safety due to the illegality of the procedure.

I arrived at the clinic and it was as I had imagined. It was a room in her small quarter. There was a filthy rag, a wooden table with some dried blood that must have seen numerous procedures and there were absolutely no disposable operation instruments in sight.

Interestingly, she charged Rs2000 for the procedure, prescribed some antibiotics which I knew her patients either couldn’t afford or cared not to take. As an educated middle class woman, I realised that day that abortions are a phantom in our society. Everyone knows about them, they linger in the haunted mind but no one admits to their presence and prevalent use – not openly at least.

These women are quite easily facilitated and one can find a variety of abortion facilities ranging from midwives to nurses to renowned doctors depending upon the contacts or pocket of the needy party. It is also very easy to find and purchase over-the-counter medicine to induce medical abortion.

According to a report of the Population Council in 2012, as many as 700,000 women in Pakistan faced complications while undergoing an abortion. Apart from the lower class, women and young girls from the middle class – the more traditionalised, stratified class of society – indulge in this practice for various reasons. Some opt for an abortion when they find out that the unborn baby is female. In other cases, unmarried girls who are involved in open-ended relationships make the decision to abort the unborn foetus either as a compulsion or as a symbol of the right to make a decision about their own bodies. Still others, opt for or are forced to get an abortion since they have too many children already.

Unfortunately, an abortion seems to be the easier option, especially to unmarried women who have been abandoned by their partners. From their perspective, it is better to kill the unborn child than to face the stigmatisation of an illegitimate child.

I spoke to a seemingly educated woman who explained that she opted for an abortion since the baby that she was carrying had been conceived out-of-wedlock and she knew that the punishment for adultery was stoning and killing the child.

According to her, an abortion was the right course to save her from shame.

However, her interpretation was completely wrong. Islam does not warrant the death of a child in any case, be it adultery or not. Such an action can only be taken in an extraordinary situation when there is danger to either the life of the mother or child or any such medical condition. However, her ignorance stemmed from the fact that this topic is taboo in almost all Muslim societies. In Pakistan’s conservative environment, this topic hardly ever surfaces and sadly, that is why such misconceptions exist.

In other cases, women who opt for abortion are forced by the father of the child. After all, what would a man know about the physical pain or the emotional trauma and guilt of deliberately killing your own child – a child that is nurtured inside the mother’s womb?

Even men from an educated background at times force their wives to abort unwanted children. I know of a female doctor – now a housewife – whose well-educated husband refuses to take birth control and doesn’t even allow her to practice any form of prevention. Instead, he has forced her to go through an abortion five times.

Although an abortion is a proper surgical procedure, not many in our country can afford to get it done by qualified doctors and end up being brutalised and even killed in the process. It seems to me that a woman’s life is considered to be cheaper than a man’s. But the fact is that a woman’s life and health is even more precious since she is the one who bears, births and nurtures children.

So, I ask you, what can be more violating to the dignity of human life than parents killing their own children when there are effective and safe measures of birth control available?

And more importantly, how can a man endanger the life of the woman whom he loves or has married and promised to protect?