Putting journalists behind bars (or in coffins) – the loss is yours! 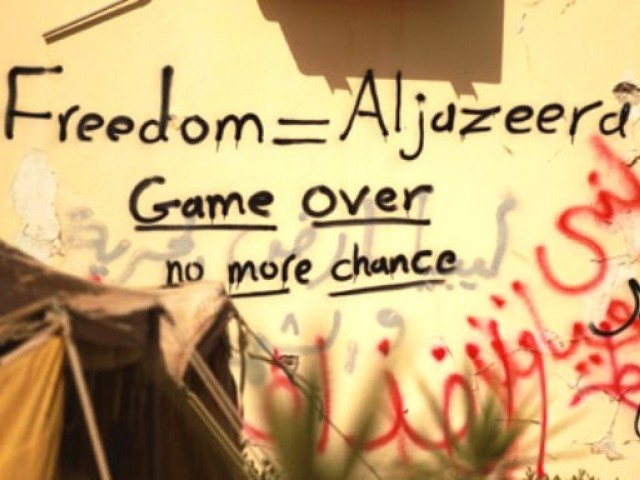 20 Al Jazeera journalists are facing criminal charges in Egypt on grounds of “aiding a terrorist group” and “harming the national interest”. PHOTO: AFP

Last week, a delegation of foreign journalists visited our newspaper’s thrice-attacked office in Karachi, Pakistan. As we hustled to make them feel comfortable while simultaneously trying to explain the newsroom dynamics, one of them asked us in a matter-of-fact tone.

“Do you support the current government?”

There was a nervous silence as each of us lingered over the question for a few seconds. Until one of my colleagues responded,

“We try and support no one. Our job is to report things as is.”

All of us nodded in unison.

In a simple sentence, she had summed up the essence of what journalists all across the world were struggling to do and inevitably paying a huge price for.

While our words were being stifled by fear in Pakistan, a couple of thousands of miles away, 20 Al Jazeera journalists were facing criminal charges in Egypt on grounds of “aiding a terrorist group” and “harming the national interest”. These journalists were just doing their job by documenting the removal of a democratically elected government.

Till date, 63 journalists have lost their lives while covering the conflict in Syria. The list is long, the sacrifices varied in nature but the purpose has been the same – to get the most accurate version of the story possible to our readers.

But the job is becoming increasingly difficult by the day.

Stories have become unusually complicated, the stakes have risen immeasurably and even the wrong headline can result in lost lives. There is an alarming lack of consensus on who the enemy is and the war is no longer constrained to the battlefields. Instead, it has seeped into mindsets, ideologies and now our newsrooms.

It is in these challenging circumstances that reporters, editors, photographers and producers are trying to get as close to the story as possible. A story that almost always has two sides, if not more. The sides can be brutally ugly and ones you do not agree with, but nevertheless have to report on because it is the founding principle of your profession.

Be it the Taliban in Pakistan or the Muslim Brotherhood in Egypt or the pro-Assad forces in Syria – it is impossible to talk holistically about these regions without taking all the significant social and political forces into account.

Yes, editorial calls need to be made, lines have to be drawn between reporting and propaganda. But being penalised, threatened or killed merely for covering all aspects of a story is simply outrageous.

As a part of the journalist community, I can vouch that most of us are not in it for the money. Unless you are a foreign correspondent, there are no fancy overseas trips or a rendezvous with fame either. Most of us, most of the time are underrated, underpaid and overworked; trapped behind computer screens and camera lenses or buried into the crevices of our notepads.

Our highs are few and far apart, at times in the form of seeing our name printed under a story. At others, going to bed after a gruelling shift knowing that somehow somewhere you were responsible for a story that might not have been reported otherwise.

But when by-lines have to be sacrificed and sentences have to be omitted due to fear of backlashes, it not only kills a part of the journalist but also leaves a gaping black hole in the profession. A hole that should serve as a glaring reminder that an attack on a journalist’s freedom of expression is an attack on the entire society – the first sign of warning marking a shrinking space for dissent.

Because make no mistake, if today they put us behind bars (or in coffins) for projecting your voice, tomorrow you may not even have one.

And sadly, there may be no one around to even tell that story.