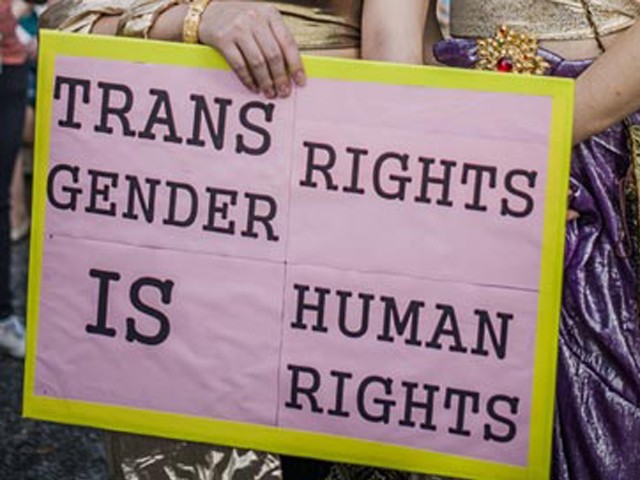 Accepted on occasions such as weddings and child births in Pakistan, the transgender community was only recently registered and given NICs. PHOTO: AFP

As I scanned through the multitude of headlines splashed across some of Pakistan’s e-papers on January 30, 2014 one headline caught my eye. The Sindh government has employed three transgender persons as full-time employees.

The only thing that disappointed me was the fact that this issue was not carried across every e-paper and it was limited to only a handful of news reporting websites in Pakistan.

The term ‘transgender’ encompasses a wide array of definitions. To put it in the simplest of terms, it is when the state of one’s gender identity does not match one’s assigned gender. This includes a person whose sexual identity does not fall under the notions of male or female as well as people who were assigned a sex at birth based on their genitals but feel that it is an untrue description of how they see themselves.

The persecution of the transgender population in Pakistan has gone on for a while, although in a different way compared to the persecution of other minorities in the country. While most ethnic and religious minorities in the country are subject to physical violence, the transgender population in Pakistan, like in other parts of South Asia, is more prone to ridicule and harassment.

Having said that, they are accepted in our society on certain occasions such as dancing at weddings. They are even invited to certain events such as the birth of child due to the superstitious nature of our society. People give alms to them, afraid that a transgender person has the ability to inflict bad luck upon a person.

More commonly, they can be seen at traffic signals and in markets asking people for alms, which in addition to the indifferent shrug can also result in wisecracks and ridicule from the people they approach.

One of the primary reasons our transgender population has always been treated as outcasts, despite their acceptance at certain social events, was our government’s refusal to accept them as part of society. As many would know, our Computerised National Identity Cards (CNIC) only had two options for gender – male and female. This changed in 2009 when in a truly historic move, the Supreme Court of Pakistan granted civil rights to our transgender population which meant that not only would our CNICs carry a third gender option, they would also be able to vote and participate in elections.

Four years later, in a brilliant move propagated yet again by the Pakistan People’s Party (PPP), the Sindh government has given employment to three transgender persons.

Although this may appear to be an insignificant move to those who are more worried about the Bilawal House wall, the terror of Malala’s book or the Youth Loan Program, everyone else will applaud it. This signifies a small drop in the ever-expanding ocean of breaking free from the shackles of social stigmas in Pakistan. And one can only hope that something like this only becomes stronger with time.

The issues faced by our transgender population are part of the bigger lesbian, gay, bisexual, transgender (LGBT) rights issue but this is a start. While there is no formal campaign from the LGBT community for civil rights, it would be foolish to turn a blind eye to their presence in our society.

According to some reports, there are around 500,000 transgender persons in Pakistan. Add the lesbian, gay and bi-sexual population to it and the number would swell further. While this may appear to be a small number, you cannot go through a complete overhaul of social acceptance in such a short space of time. It needs to be done step-by-step and the first steps taken by the Sindh government are very encouraging. After all, every person is entitled to his or her sexual or gender identity.

The 2009 ruling by the Supreme Court and the recent move by the Sindh Government are welcome steps to move towards a society where harassment and discrimination based on strictly personal matters is reduced.

This is a brilliant precedent set, however, there will always be that group of people – mostly with anti-PPP sentiments – that claims that these moves are mere gimmicks employed to take away attention from other issues. What that group will always forget is that a country choking on social suffocation needs these moves.

These aren’t gimmicks. These are much needed steps to influx some fresh oxygen into a society polluted with bigotry.

Bravo Sindh government, another brilliant move, another step in the right direction!