MohenjoDaro may not be the same after the Sindh Festival gets done with it! 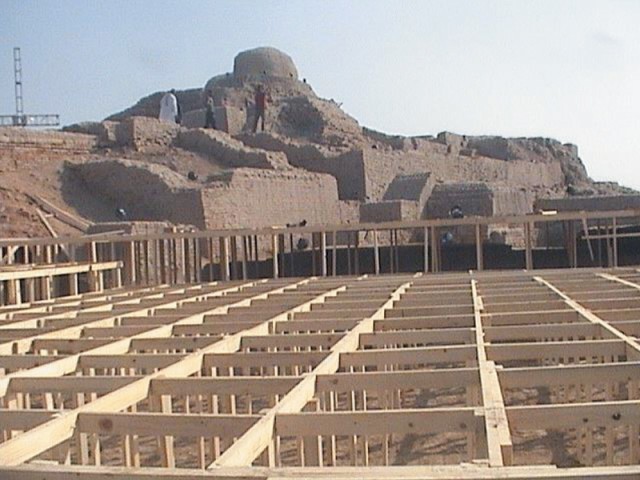 While the sentiments of the Sindh Festival’s organisers are applauded for trying to bring the world’s attention to our history, it reflects poorly on their judgment and that of the authorities to allow such an event to proceed at this fragile heritage site. PHOTO: FILE

They say a picture speaks a thousand words. Sometimes, those words carry a sense of agony and irony.  Such was the case when I came across a picture depicting the historic mound of MohenjoDaro, surrounded by wooden scaffolding and construction crews.

My first reaction was to do a double take.

I thought I surely had been mistaken for why would anyone allow such an archaeological wonder to go under the proverbial knife and in such a daring fashion?

Upon reading the associated article, I was informed that preparations were afoot to hold the opening ceremony of the Sindh Festival at this heritage site. The festival is a Bilawal Bhutto led initiative which seeks to highlight the social and cultural heritage of the province. In this case, however, the event directly poses a serious threat to the stability of one of the world’s most valuable archaeological treasures.

MohenjoDaro, or Mound of the Dead, is considered ground zero when it comes to the study of Indus Valley Civilisation. Situated approximately 400km north of Karachi, the site was discovered by accident when archaeologist R D Banerji initiated a dig in 1922 to explore the visible Buddhist stupa and monastery in the area. What happened next stunned the world as the expedition revealed one of the world’s first modern cities. It contained dug wells for accessing clean drinking water, unheard of in civilisations dating back over 4000 years.

MohenjoDaro before and after the preparations. Photo: AFP

The wastewater systems, that a significant portion of South Asia lacks today, comprised effluent drains built with brick masonry that ran along unpaved streets.  Sir John Marshall, the then Director General of the Archaeological Department of India, remarked in a book that,

“Never for a moment was it imagined that five thousand years ago, even before the Aryans were heard of, the Panjab (sic) and Sind, if not other parts of India, were enjoying an advanced and singularly uniform civilisation of their own, closely akin but in some respects even superior to that of contemporary Mesopotamia and Egypt.”

MohenjoDaro before and after the preparations. Photo: AFP

Nearly a century later, we are still not even half way through exploring the wonders of MohenjoDaro. The archaeologists have taken care not to rush into further exploration since the structures are vulnerable to even the changes in moisture present in the air, among other factors.

Efforts to stabilise the brick structures have run into problems.

Dr Asma Ibrahim, a leading Pakistani archaeologist, ensures that the way things are going, this heritage site will completely disappear in 20 years due to decay.

It is in this context that I find hosting the event on the grounds of MohenjoDaro baffling. Any changes, however minor, to the façade of the site are magnified many times over in the context of its archaeological importance. There is no doubt that installation of light fixtures, scaffolding for a staging area and influx of large number of people will do irreparable damage to the site.

Pakistan has passed a number of legislations protecting such archaeological treasures, not the least of which is the Antiquities Act of 1975. The environmental legislation also calls for a detailed impact assessment whenever such activities are undertaken at protected heritage sites. There is no reason to believe that any such assessment was undertaken by the organisers. Indeed, the authorities, themselves, seem to be the enablers in this instance.

Additionally, and perhaps more importantly, MohenjoDaro is one of the six sites in Pakistan that fall under UNESCO’s World Heritage List and are considered to be of ‘outstanding universal value’.

While the sentiments of the Sindh Festival’s organisers are applauded for trying to bring the world’s attention to our history, it reflects poorly on their judgment and that of the authorities to allow such an event to proceed at this fragile heritage site.

There are a number of other ways that can be used to celebrate the value of our heritage.

Mr Bhutto could have initiated a plan to highlight such heritage through changes in the curriculum. He could have used some of the funds received for this event to develop a television documentary on our collective heritage.

In holding this event at MohenjoDaro, in disregard of relevant laws, Mr Bhutto would find that it would cease to be a cultural event and would be seen as a political stunt.

Pakistan is home to many historic and environmental treasures. We just choose to ignore them at our own peril.

A PhD Candidate in Environmental Policy at State University of New York. He previously worked as a Capacity Building Specialist with the Planning Commission of Pakistan. He tweets @imran2u (twitter.com/imran2u)

So what if she is 8-months old? She is Ahmadi, kill her!