Veena Malik and her never-ending ‘dramas’ 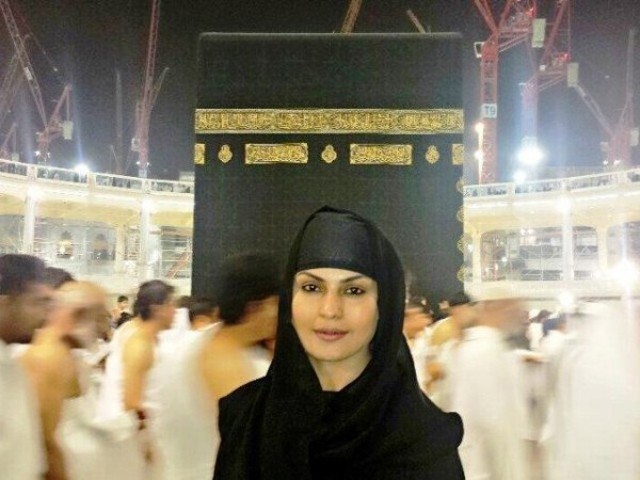 I have nothing against practicing one’s faith but no one can publicly criticise another’s profession in the name of religion. Not even Veena Malik. PHOTO:FILE/TWITTER/iVeenaKhan

Veena Malik has found a new claim to fame. And this time it is at the opposite end of the pendulum. Suddenly modelling, acting, dancing and all showbiz-related content has been deemed un-Islamic.

Don’t get me wrong, I have nothing against practicing one’s faith but no one can publicly criticise another’s profession in the name of religion. No one can have the audacity to turn on someone or something that made you who you are. Not even Veena Malik.

Who is she to decide about the sanctity of the showbiz industry?

Yes, people can change; they can become more devout and pious. But they cannot criticise the actions of others and especially, not on national television.

And what annoys me is that the media gave her ‘affected’ message live coverage. The same media that made her what she is today. We all know about her initial journey of failure as an actress in Lollywood and then her failed attempt at acting in TV shows. Her fortune only changed for the better after she acted in Pakistan’s popular comedy show Hum Sab Umeed Say Hain.

Then she tried her luck in India where once again, she acted in a succession of failures including Zindagi 50-50, Gali Gali Mein Chor Hai and Tere Naal Love Hogaya. While in India, she created quite a controversy when participating in Big Boss and with her ‘allegedly’ nude photo shoot for the Indian online edition of the international monthly men’s lifestyle magazine FHM. And if this photo shoot was not enough, the next drama on the plate was her tattoo which was visible during the shoot. The tattoo happened to be of Pakistan’s Inter-Services Intelligence (ISI) and after this, there were speculations that Veena was acting as a Pakistani spy in India – a claim she vehemently denied, of course.

My point is that Veena has gone out of her way to create a spectacle out of everything she has put herself into. And she has done a good job, judging from the fame she has accumulated over the years. I don’t think there is anyone who would not know of Veena Malik. They might not have seen her pictures, shows or movies, but they would still know who she is and why she is famous.

Veena Malik has always gone out of her way to create a spectacle out of everything she has put herself into. Photo: File

So, this new video just seems like another theatrical attempt to add some spice to her life (and to that of others too).

I am not to trying to compare her actions to those of a regular woman (since she has clearly shown that she isn’t one) but she needs to understand that there are several ways to resolve issues. And not all of them have to be so dramatic.

And then, along comes Veena, clad in her abaya and hijab, setting off for Umrah and asking people for forgiveness for her ‘past mistakes’ and requesting them to pray for her so that she is able to stick to this ‘change’ in her life. She has announced her retirement from the Indian and Pakistani film industry but has promised that she will only work for social welfare projects in the future.

She has announced her retirement from the film industry and has claimed that she will only work for social welfare projects. Photo: File

Her supporters will argue that it is customary to ask for prayers and forgiveness when heading off to a pilgrimage. But coming on air and asking for ‘forgiveness for her past mistakes’ just seems insulting to the media industry – the very industry that welcomed her and made her who she is today.

I just think that religion is one’s personal domain and flaunting her ‘Naik Perveen-ness’ in our faces, just like she flaunted all her other assets in our faces yesterday, is in poor taste.

Just because she has decided to set out on a new part in her life does not mean that the entire film industry is un-Islamic and is on the path to despair. She has claimed in her interviews that ‘well-wishers from all over the world have been congratulating her and sending her prayers’.

I think that had she made this move in a more discreet and subtle way, her well-wishers would have been much more in number.

Aids is a real disease, get out of your 'conservative' bubble and believe it!