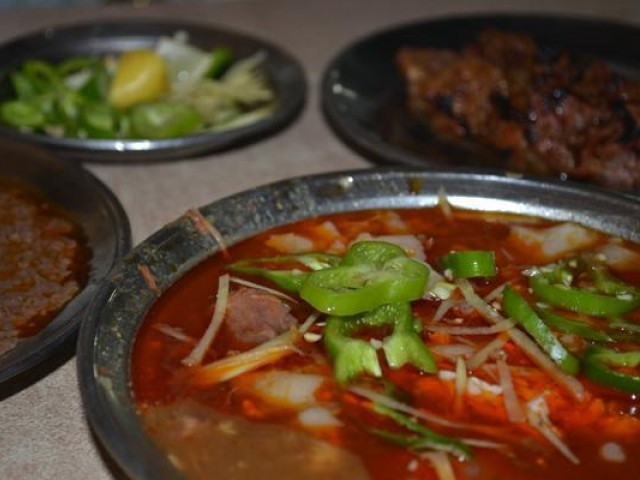 Come night and the street metamorphoses into a cornucopia of savoury and sweet, awash in garish neon signs advertising the delectable offerings of each eating place. PHOTO: SIBTAIN NAQVI

The waiter picked up my Naan. He saw my quizzical expression and said,

“It’s not hot anymore. I am getting you a fresh one.”

Then he comes back and asks in a solicitous whisper if I am enjoying myself. With such courtliness, how could I not?

This Michelin star service was not at an exorbitantly priced restaurant. No, the setting of this delightful exchange was Waheed Nihari at Karachi’s Burns Road a.k.a. food paradise. Ernest Hemingway called Paris a moveable feast – in the same vein, Karachi is an immovable feast and Burns Road the location.

The food capital of Pakistan is reputed to be Lahore.

Lahore has her temptations but Karachi’s place in gastronomic heaven is firm with her culinary repertoire running the gamut from Paye to pizza and ravioli to Rabri.

To enlighten those who have not embarked on the food pilgrimage or haven’t gone outside their comfort zone, Burns Road is a street in the heart of the old part of Karachi and is famous for its traditional (read mouth-watering) food items such as Nihari, Haleem, Kebabs, fried fish and desserts such as Rabri and traditional drinks such as Lassi.

If you take the road from the Urdu Bazaar and turn to the traffic light at the far end, you’ll enter the Holy Grail for foodies. During the day the road looks like any other main road with buses spewing smoke and pedestrians choking the sidewalks. But come night and the street metamorphoses into a cornucopia of savoury and sweet, awash in garish neon signs advertising the delectable offerings of each eating place.

It is serious eating here, with no fancy presentations or garnishes, just honest, good food that lures the eater into a bacchanal of gluttony. My first experience was no light hearted affair but a complete immersion in the victuals on offer.

While perusing the various places, even the most casual observer will notice the predominance of restaurants that hark back to the city of Delhi. You can hear the echoes of Chandi Chawk and Nizammuddin and, in fact, I found more than a passing resemblance between a Nihari place here and the famous Karim restaurant in Delhi.

According to senior denizens of the area, many people who migrated from Delhi to Karachi preferred to live on Burns Road.

“In the 1950s, the newly migrated people were looking for dishes that were famous in Delhi and the shopkeepers of that time not only adapted the names and reproduced recipes of Delhi’s traditional fare but also decided to include the name Delhi while naming their shops to conjure an effect,” said Abbas Raza, an elderly resident of Burns Road.

Before partition, Rizwan’s grandfather was running a sweets shop near Jama Masjid Delhi and today he owns an establishment that is now known as Delhi Darbar Sweets. Many shops, including Rizwan’s, that opened in the late 1950s and early 1960s are still going strong and it is a testament to their popularity that even at four in the morning I have to get past a traffic jam to get some Nihari for my Sehri in Ramzan.

Waheed’s Nihari is probably the best known place and one bite of the hot, gelatinous concoction will make it clear why it is so. Perhaps the cleanliness of the floor might deter some, but do not be alarmed since the plates are incontestably clean. The ambience resonates with that of the fictional Weatherbury Inn from Thomas Hardy’s Far From the Madding Crowd, where the drinking cups are described in much the same vein. The rough hewn patrons mix happily with the affluent who are here partly because of nostalgia of student days but mostly drawn in by the siren call of the Nihari and the butter fried Kebabs.

Opposite Waheed are two of the many gems in this treasure house, namely the Gulab Jamun maker and the fried fish seller. Names are withheld at their request but even I felt that the hot, deep fried treats should really be kept a secret.

You can choose your fish and have it cut any way you desire. A slow dip in the searing oil, a sound of frying that’s music to my stomach, a squeeze of lemon, a pinch of spices and you will have your taste buds dancing in no time. The fish is fresh from the morning catch and the taste is enough to make the English swear off their bland version.

If Nihari or fish is not your thing then perhaps you will opt for the other import from across the border, Haleem.

Mazedar Haleem, the city’s most famous Haleem seller, is head quartered here, as is Karachi Haleem. These people are no mere mortals but magicians who take the humble pulses, toss in a bit of meat and some spices and create a stew fit for a monarch and healthy to boot.

Haleem was probably created to debunk the theory that anything hedonistic is bad for your health. You can even get it canned to send to your loved ones abroad or store it as rations for nuclear fallout. Even being encased in a lead bunker isn’t so bad if the canned supplies last so I usually have a few pounds of canned stuff lying around the house.

Moving from the Delhi foodstuffs you come to the relative newcomer from the north, the Sajji.

The meat, usually chicken or mutton, is minimally spiced and slowly cooked over a fire, then cut up and sprinkled with masala and lemon juice. Agha Sajji House and Al-Sajjad Sajji are two prominent places. The roaring fires and meat laden spits do whet your appetite and the droves of people munching away prove it to be so.

Burns Road caters to a variety of tastes, so capricious epicures need not worry. If snacks are what you are looking for then look no further than Fresco Sweets, famous for its Dahi Phulki which balances sweet and tart perfectly and the Phulkis seemingly made out of sunbeams and angel mist – so light that they can almost be inhaled in but with a burst of flavour that hits you and keeps lulling away long after you have had your fill.

Burns Road is also host to some of the city’s famous sweet places too. Delhi Rabri House proves that Nihari and Haleem are not the only things the Delhites were adept at, for the Rabri here is sinfully good.

Kulfi, ice cream, Faluda, and sweet milk are all on offer and awfully good too, but it’s the Rabri that brings in the customers. I was told that the maker has been making the same creamy stuff for over thirty years with no intention of stopping soon.

After sampling Karhai, Nihari, Sajji or Haleem many want to pass over the rich desserts and move on to something refreshing to wash down the good stuff. The Punjab Lassi House has been doing that for over a quarter of a century. The Lassi slips down your throat, singing the songs of the Punjab and erasing the after effects of spicy food.

In summer, it is a godsend and banishes the heat demons just as effectively. Sweet, salty or churned with a crumbling Perha sweetmeat, the Lassi here is the benchmark for the rest, the highpoint of any dairy drink.

Burns Road’s position as the dowager empress of the food world is firmly entrenched. There are other places in different parts of Karachi and the country which have great food and firm clientele. But if there is one spot that throws down the gauntlet and stands apart, it’s this magical street of sumptuous, succulent treats.