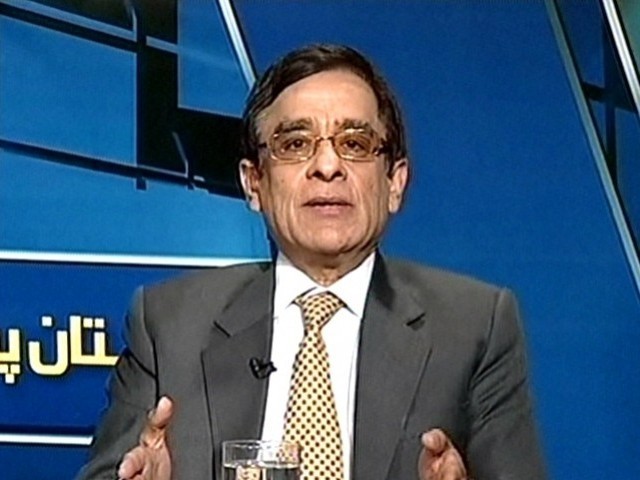 Dr Laghari denies of any contribution to the said paper and says he had no knowledge of it. PHOTO: REUTERS

In the last few days a report surfaced in The Express Tribune that Dr Javaid Laghari, former Head of HEC and former Vice-Chancellor of SZABIST, was found ‘guilty’ of plagiarism by a three-member HEC committee.

By virtue of a paper Dr Laghari was said to have co-authored in 2003 with Mohammed Nadeem, a member of the Faculty of the Computer Science Departmet at SZABIST, the committee used plagiarism software to check the contents of the paper and found that it was 30 per cent plagiarised from a European Union report, although a previous report in the Dawn from August 2013 said the amount was as high as 78 per cent.

The paper in question, called ‘Study of Pakistan Election System as ‘Intelligent E-System’’ can be found here. And the European Union report from which the paper is claimed to be plagiarised is here: EU Election Observation Mission to Pakistan.

The paper in question was published in The Journal of Independent Studies and Research, which is published out of SZABIST but is not HEC-approved as an academic journal. Mohammed Nadeem happens to be the editor of this publication.

I examined the paper carefully and found the phrases and paragraphs that have been plagiarised from the EU report.

Plagiarism is more than just an issue of ‘copy-paste’ as people think. You are perfectly entitled to quote or paraphrase from any outside source as long as you credit your source. That means referencing it in the body of the paper as well as including it in your list of references or bibliography at the end of the paper.

The paper in question fails to do this, and therefore the plagiarism accusation sticks.

In the case of this paper, I couldn’t say more than 20% of it was plagiarised. But it doesn’t matter if this happens with one sentence or 30% of it: even one sentence lifted from someone else’s work counts as plagiarism.

This news goes against everything I know about Dr Laghari, personally and professionally.

I taught at SZABIST from 2006-2010 in the Media Science and Social Science department. I taught, more than 80 students a semester, Basic and Advanced English Writing Skills. One of the key components of my course was to educate students about plagiarism, and teach them how to not commit it when writing academic papers.

Dr Laghari encouraged me in every way to spearhead a campus-wide campaign against plagiarism.

I held a seminar which was widely attended by faculty and students; the seminar was recorded and students were made to listen to it at the beginning of each academic year. It’s still played on the SZABIST student radio station today; I heard it as I was driving around Clifton listening to FM radio. It brought back memories of how important the issue was and how Dr Laghari strongly endorsed a no-plagiarism policy.

When I had to fail 30% of my first semester class for plagiarism, and the students protested, begging me to reconsider, Dr Laghari never pressured me to give in on my stance, even though the parents and the head of my department got involved. The decision was left up to me and I stood by it. I suffered no consequences as a result.

What could be a bigger statement about plagiarism than that?

At any rate, I’m willing to vouch personally for Dr Laghari’s zero-tolerance policy towards plagiarism. He would never knowingly commit it in any work of his own.

Mohammed Nadeem’s words in the Acknowledgements section speak more strongly than anything else about this whole sordid matter.

“By the grace of Allah, this independent study stands complete. However, calling it independent is not quite correct. I owe the success of this effort to my institute and my Independent study supervisor, Dr Javaid R Laghari, without whose guidance this accomplishment would have been impossible. Right from the very start when he accepted to being my supervisor he has been a source of inspiration and I can state that he helped tremendously in making it a far better study report than it would otherwise have been. His helpfulness was apparent in numerous ways. He contributed his infectious enthusiasm and encouragement and took time out of busy days to talk to me whenever required. The Centre of Information & Research (SZABIST) was also an immense resource for providing study material that really helped me out in using the latest technology, which I have used to practically implement my study.

Above all, any remaining errors, impertinencies and imbecilities are entirely my responsibility.”

How did it appear on his resume, then?

Dr Laghari wrote to me with his side of the story, so let’s give him the opportunity to defend himself.

“[In] 2004, Nadeem, a faculty member in Computer Sciences at SZABIST, said he wanted to propose e-elections and wanted to write about it. He asked me if I could get him election results data. I got these reports for him, and he discussed his ‘proposed model’ with me a few times. Then he wrote a report to send to [Benazir Bhutto], and also put my name on it.

Since he was also the editor of JISR (which I call a ‘magazine’ as it was not, and still is not, HEC-recognized as a journal), he published it in the next issue without my knowledge. There were no anti-plagiarism software at that time, and it was typical that authors wrote names of advisors on their papers, and since I was his advisor on his other work, he put my name on the paper too. That is how it got into my CV. An innocent oversight 10 years ago. I was not looking for papers or students so there was no vested interest, and no credit gained.”

Dr Laghari goes on to add:

“When it came to my attention, six months back, I immediately took it out of my CV, wrote to Dr Jalbani [the current Vice Chancellor] at SZABIST to withdraw that paper from JISR, and wrote to Nadeem through Facebook. Nadeem replied and clarified that he had added my name without my permission, and I had no contribution in the paper. Incidentally, the acknowledgement in the paper had the same statement by Nadeem.”

Here is Mohammed Nadeem’s statement via email on the matter:

“I am M Nadeem  and my Independent study course work worth of three credit hours called  ‘intelligent e-election system’ was published in 2003 as an independent Study work ‘The work was done totally and independently by myself’ while I was working in SZABIST.  Remember at that time there was no such kind of Plagiarisms facilities provided by HEC or Policy been delivered to institution. And even any software kind of things available for researcher or to universities can check their research work and rectify such kind of things I mean anti plagiarism software.

The report was neither the Thesis or dissertation or research paper but only the independent research study work like an independent course work, all work had been done by myself.

In my educated opinion, it is obvious there’s a witch hunt against Dr Laghari, to block his efforts to be re-appointed as HEC Chairperson. We all have skeletons in our closets, and this one has been dug up specifically to disqualify him as head of HEC according to a policy that he himself promulgated and used to block others’ appointments.

And why would everyone be out to get Dr Laghari, to ‘defame’ him as he says?

It could have something to do with the fact that the current acting HEC chairman is Dr Laghari’s rival for the position, which is to be decided in the next few weeks.

‘Old cases before the announcement of plagiarism policy i.e. September 27, 2007 shall not be taken up if the concerned authors are not claiming the credit in any way for the paper alleged to be plagiarised’.

In taking up this case, the HEC is in fact violating its own policy.

Is this justice, or is it vengeance? It brings to mind this quote, from a Web site called Dear Coquette:

But I don’t think we’re talking justice or vengeance. I think we are talking about a case of political victimisation, and this is the real tragedy of the entire ‘scandal’.