Was he a human or a donkey? 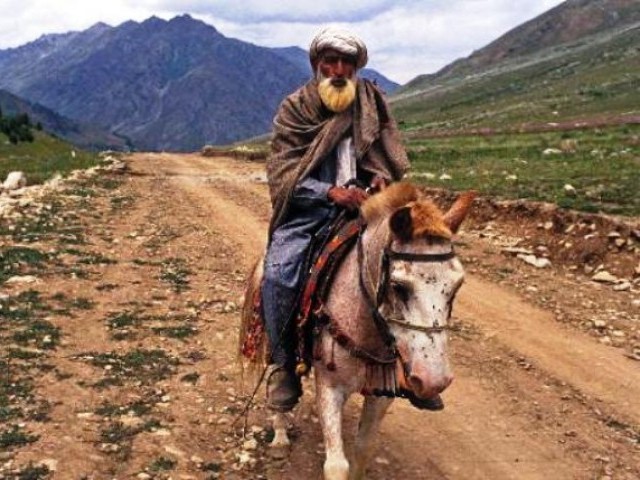 I still wonder how they allowed his body to be buried in the graveyard of men since he had never lived the life of men. PHOTO: AFP

For the past few days now, every night on my way home from work, I’ve been seeing an injured donkey lying in the corner of a dirty street near my house. One of its front legs is broken and I am sure it cannot move. Every night I plan to do something to help it but in the morning, it completely slips my mind.

I feel the helplessness of the donkey – if, God forbid, one of my own legs were injured or broken, I wouldn’t be able to survive keeping in mind the ample amount of work I have to do.

My heart goes out to that donkey every time I see it.

However, there is something more to this donkey. I can’t help but notice that there is a remarkable resemblance between it and Hussani Poweley.

Now you must be wondering who Hussani Poweley is.

Well, let me tell you his story.

It was when I learnt the first ten digits of the number count that I came to know that Hussani was a human being.

My father decided to test my amateur mathematical knowledge by asking me how many animals were present in our courtyard.

I counted them and replied confidently,

“No, there aren’t nine, my son,” my father corrected me with the same confidence.

But according to my learning, there were nine animals and to prove the truth I started counting on my fingers,

“Two cows, three goats, one mare, one donkey, one dog and one Hussani – so that is nine.”

“But Hussani is not an animal; he is a human being, like us.”

I did not agree with my father; how could Hussani be a human being when he remained with the animals all the time?

The dispute was not settled between father and son; therefore, the case was presented in the court of my grandfather. The entire family gathered, the case was debated upon and the final verdict was announced.

Hussani was announced as a human and I lost the case but one rupee was given to me for my strong argument.

That night I could not sleep because my young and inquisitive mind was not ready to accept Hussani as a human being.

How could he be human?

“If he is a man, then why doesn’t he live like us? Why does he always remain with animals? He even sleeps on the ground amongst them.”

After much contemplation and a lack of answers, I slept and in my dreams I saw him barking, eating grass and walking like a donkey.

Hussani was the only servant for our large family. His mother died when he was only 10-years-old and nobody knew about his father. His mother never revealed that secret. At the time of his mother’s death, the other Poweleys drove him out of his home because he was a prostitute’s son.

The Poweleys were the untouchable people of the village – the lowest of all the castes. They earned their livelihood by doing petty chores like fetching water and weaving shawls. So Hussani was not welcomed even in his own, low-caste community. When the Poweleys kicked him out, my grandfather, who was the chief of the village, brought him to our home.

Since then, Hussani has lived with us. Our village was at the foot of a hot and dry mountain. Due to very low water levels, our land was not fit for agriculture. There was only one well in the village for a huge population. Hussani had to get up early in the morning to fetch water after which he had to go to the far off fields to graze the animals.

I never saw him at home during daytime.

At sunset, he would appear in the village with his flock, riding the slow moving donkey. Due to his large front teeth, he always looked like he was smiling. The extreme weather of the region had made his skin resemble a burnt, black stone. While sitting on the donkey, he would look like a man from the Stone Age – the initial, less-developed human form from early times.

Passing through the streets, he had to face the mocking remarks of people. A few troublemakers had even spread an evil rumour that Hussani had an illegitimate relationship with the donkey.

“Hey Hussani, the donkey’s movement shows you have made good use of her today.”

While another one would poke his head out of the tea hut and yell,

“No, no friends! Don’t say that. This ass is the only sister Hussani has, how can he do it with his sister?”

Hussani would offer only laughter in reply.

There was a mare too but he never dared to ride it; I am sure he was not allowed to do so. He was a Poweley and was born to ride donkeys.

In the evening, I would stand and wait at the large, front door of our courtyard to see him. I would see him coming down from the Black Mountains with his slow moving animals, like a ragged line of retreating troops. In the darkening evening, the bells tied around the necks of these animals sounded like melancholic chimes, like the tragic music in an old film.

He never came empty-handed though; he always brought something for me – wild fruits, flowers and often mushrooms. Above all, he had lots of stories to tell me; stories of mysterious creatures and wolves.

Thursdays and Fridays were the best days for Hussani since the villagers would cook special sweet dishes on these days to put under the thick trees of barren fields. They believed that ghosts lived in the trees and the only way to placate them was by offering sweet delicacies.

Hussani would secretly eat as much as he could and hence, affirm the belief of the staunch believers.

Years passed and we became young adults, our grandparents died, elder brothers became fathers but there was no change in Hussani’s life. His responsibilities increased and he had to lift more water on his feeble shoulders.

By now, my elder uncle was the head of the family; he was very strict and would often beat Hussani for his growing lethargy.

But one day, I began to notice a strange change that had occurred in his personality. He started wearing neat clothes. Previously, he only had one dress that he used to wash once a month. But he started wearing more clothes and washing them every week; his fastidiousness did not go unnoticed.

He was in love with one of the beggars’ daughters.

They lived outside the village and were considered even more detestable than the Poweleys. Hussani had a better reputation, being the servant of the chief of the village.

Soon the news of the ‘disgusting’ love affair reached my uncle. He could have scolded him alone but it was to become an event of great entertainment for the nobles of the village. The issue was to be decided in the presence of all.

At night, all the nobles gathered in our huge sitting room with my uncle. Hussani was sitting on the ground in the centre of the crowd. In a heavy voice, my uncle asked,

“Well, Hussani, is it true that you are in love with the daughter of a beggar?”

Hussani did not reply and sat silently with his head bowed.

“His mother was also a great lover,” said one of the nobles, and there was great laughter.

After that, a session of humiliation began and they exchanged dirty jokes about his mother. An old man said,

“We owe much to Hussani’s mother – she was the teacher of our youth; she shared the violent burden of our youth’s energetic passions.”

Hussani’s love wilted and died under the stifling laughter. When he rose from the meeting, he felt himself free of the burden of love. He lifted the pitcher and started doing his work as if nothing had happened.

After that nobody saw him near the huts of the beggars.

Later on, life dragged me into its vicious circle and Hussani was left far behind. I had to leave the village in search of a job and settled in a different town. After many years, when I returned to the village to attend the marriage ceremony of my cousin, I did not find Hussani anywhere.

On inquiring, I found out that he was counting his last days in a hut outside the village.

He suffered from tuberculosis and the disease had almost finished him. I knew that he had not been taken to any doctor because nobody would be ready to go with that donkey-like man. They would consider it humiliating.

On hearing this, I ran at once to that hut.

He was lying there in the dark. For a few minutes he did not recognise me but soon his eyes addressed me; they sparkled and he started to weep. He tried to speak but a terrible cough clenched his throat and denied him permission to utter a single word.

It was obvious that even breathing caused him terrible pain.

I could not tolerate that stinking atmosphere and came out saying,

“Hussani, don’t worry. Tomorrow I will take you to the doctor. You will soon be alright.”

However, before I left the hut, I looked back at him through the door and saw the shadow of death hovering over his withered face.

He died that very night and was buried the next morning.

There was no religious ceremony because nobody knew what his religion was. I still wonder how they allowed his body to be buried in the graveyard of men since he had never lived the life of men.

Now, after so many years, this dying donkey brought back that forgotten image of Hussani Poweley for me.

Hailing from Bahawalpur, he is currently working in Taif University, KSA, as a supervisor of Intensive English Program.