I am sorry Mr Policeman, you deserve better… 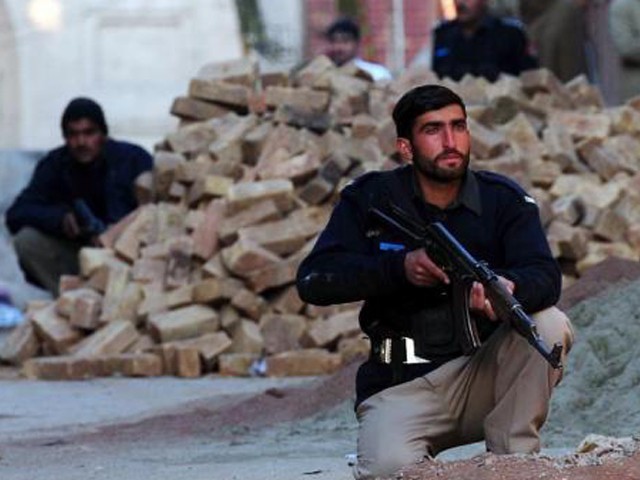 We take out processions and the city comes to a standstill if a member of a party is killed. But when it comes to our police force, all we talk about is their failure, corruption and incompetency. PHOTO: AFP

This year, like preceding years, began with massive bloodshed. There have been targeted killings of civilians in the south, sectarian killings in the west and militants in the north of Pakistan.

Amid these killings we lost a very brave policeman – Chaudhry Aslam. His death was another gloomy reminder of the continuous attack on our police force as well as our lack of empathy and recognition for their work.

In January alone 26 policemen have been killed in Karachi, while in Peshawar another six have been killed and the month is not even over yet. And scores of policemen continue to be injured and killed across the country every day.

Unfortunately, only one policeman received recognition for his service to the country.

Yes, they are corrupt but how many of us take note of their everyday battle?

They stand for hours inhaling smog and dust, often drive the most battered of vehicles and are up for duty at odd times of the day. They handle crimes ranging from petty domestic issues to hard-core terrorist attacks only to hear how incompetent they are on national television and by the public at large. One may argue that it is their job and I agree wholeheartedly.

But my question is why do they not get the same benefits as other civil servants do like the army, Rangers and the navy?

And the irony is that these forces are not even exposed to half the violence that the police force encounters on a daily basis.

You do not need to jog your memory too much to remember that only yesterday a policeman was killed guarding a Hindu temple in Peshawar while a few days ago around half a dozen policemen were killed in Landhi and six others lost their lives because a Spanish tourist decided to cycle in Balochistan.

Imagine the uproar in the media if the Spanish cyclist had been killed instead of the policemen.

But no, the death of a policeman just isn’t worth all the hullabaloo, is it?

Whether it is our minorities who need protection or members of our parliament who need security escorts during their commute; whether gangs need to be controlled or polio workers need protection while administering drops to children – we all turn to the police.

And yet while we have a Defence Day to commemorate our brave soldiers, there is no ‘Police Day’ to pay a tribute to our police force. We celebrate Kashmir Day as a public holiday even though we cannot claim all of Kashmir as our own. We take out public processions and rallies for murders of ‘important’ people, the entire city comes to a standstill if a member of a party or organisation is killed but when it comes to our police force, all we, the civilians, TV show anchors and parliamentarians, have to talk about is their failure, corruption and incompetency.

Never have there been vigils or public holidays for the brave young Pakistani policemen who sacrifice their today in the hope of a better tomorrow for us.

So, next time you walk into a place of worship or a café to enjoy a cup of coffee, take a minute to remember the person standing outside or somewhere nearby exposing himself to danger so that you can enjoy normal activities – activities which may be forbidden luxuries for this man who is putting his life on the line for you.

I would like to apologise to each and every brave Pakistani police man out there who is trying to protect us from threats we are too scared to face. We would not be safe without you and you deserve much more than we can ever give you.

Thank you for making our lives better.