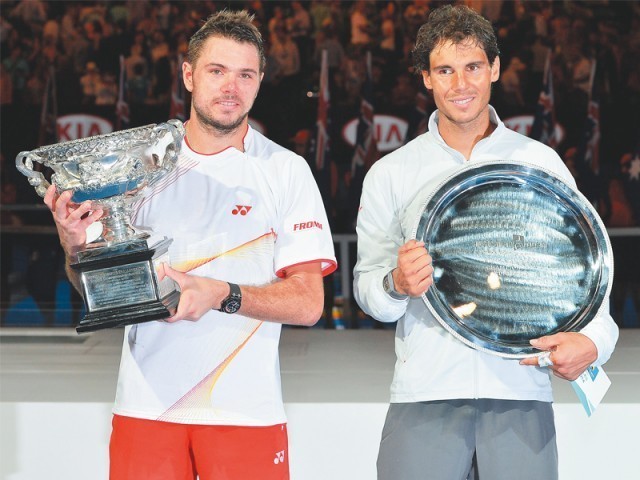 It was a battle of speed, precision, accuracy and fitness – and Wawarinka came out as the victor. Nadal’s fans were (and still are) in disbelief. No one actually thought that Wawarinka could win this. Not even Wawarika himself. PHOTO: AFP

In the realm of tennis, the Swiss class prevailed yet again. However, this time it was not the four-time Australian Open champion Roger Federer, who made the headlines. The new champion of the Australian Open 2014 is Stanislas Wawrinka, who earned his title on January 26, 2014 after defeating the unbending, unflinching and ruthless Rafael Nadal.

The match had a series of daunting backhands from both players, the services went on like cannons blowing back and forth, and the forehands surfaced like powerful entities striking the ground.

This was a night to remember for Switzerland and of course, for Wawrinka.

The match ended quickly and very painfully for Nadal. The first two sets played by Wawrinka were flawless whereas Nadal’s body language seemed to be depleting throughout the course. It is my guess that it was during the third set, when Nadal flinched his back and took a medical time out, that the audience realised that it was all over.

Rafael Nadal of Spain covers his face as he walks to the net to shake hands with Stanislas Wawrinka of Switzerland after losing their men’s singles final match at the Australian Open 2014 tennis tournament in Melbourne January 26, 2014. Photo: Reuters

The medical timeout was followed by a heated exchange between Wawrinka and the chair umpire, Carlos Ramos, since the former wanted to know what was wrong with Nadal. However, Nadal soon returned and the match continued only to end in victory for the Swiss and a resounding defeat for Spain’s tennis king. Pete Sampras – who won his first Australian Open 20 years ago – was present at this match, along with tennis legend Rod Laver, to witness the birth of the new Grand Slam champion.

It is inspirational to see a world champion suffer a physical injury, fall to the lowest ebb of his game and yet rise again, dust himself off and play the game with dignity – even if it ends in defeat. And this was exactly the case with Nadal. The match was hard for him – both physically and emotionally – and one could see the disappointment on his face.

But even after his defeat, I could feel his undying love for tennis resonating from his soul. He fought valiantly and faced defeat with grace.

Wawrinka is the first man in 20 years to beat the sport’s top two players while winning a Grand Slam title – and this victory was not an easy one for him.

He was on fire during the final match and won the first two sets by (six-three) and (six-two). However, the third set did not go so well for the victor with a score point of (three-six). Perhaps, this was because Wawrinka panicked at the thought of winning or maybe it was Nadal’s last attempt to save his inevitable fate. Nonetheless, this hindrance was a minor one.

In the fourth set both players gave their best and hence, both had to fight hard to reach the top with neither of them willing to let go.

But as we all know, Wawrinka eventually made his final service and blew the spectators away, thus resulting in his victory and winning the Norman Brooks Challenge Cup.

Stanislas Wawrinka hits a return to Rafael Nadal during their final match at the Australian Open 2014 tennis tournament on January 26, 2014. Photo: Reuters

It was a battle of speed, precision, accuracy and fitness – and Wawrinka came out as the victor. Nadal’s fans were, and still are, in disbelief. No one actually thought that Wawrinka could win this; not even Wawrinka himself, as he revealed later on in his interviews.

Even with all the thrill and excitement surrounding the match, one thing is for sure – nothing and no one can ever take away from Wawrinka what he has achieved – his very first Grand Slam title. I will not be wrong in saying that tennis fans saw the birth of an upcoming legend that night.

And I, for one, cannot wait to see the Swiss winner back in action.

Muhammad Ali, the greatest boxer of all time... now on Twitter!

The evolution of the Apple logo