Tribal leaders order gang rape of Indian girl: When will the men stand up? 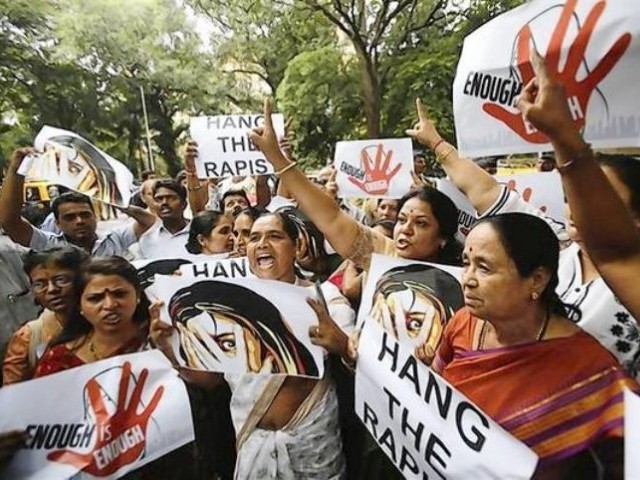 What happened in that small village where a girl was so brutally deprived of her dignity as a woman, can be happening around us right now. PHOTO: REUTERS

“We are living in a male dominated world.”

This statement has never felt as humiliating as it does today, when I am reading the news of a village council ordering the gang rape of an Indian village woman, as a form of punishment, who was suspected of having a love affair with a Muslim from a neighbouring village.

The incident which was reported to have happened on Tuesday was a result of the girl’s family’s inability to pay Rs25, 000 as a fine, for the said ‘crime’.

The news numbed me and for the first time in many years, I am at an extreme loss of words but have a burning desire to write what I am feeling at the moment.

But where do I start from?

Should I write about how painful it must have been for a father to see his daughter being gang-raped in front of the whole village because he didn’t have enough money to save his daughter?

Or should I write about the horrendous way a girl was treated by the members of same clan, by the people following the same religion, by the people she probably grew up in front of? People she knew her whole life?

Maybe I should write about the dire cost we, the people living in subcontinent, are paying because of the extreme lack of education.

For whatever its worth, the deed has been done, by the keepers of law, by the tribal leaders in the name of justice. But the thing that hurts the most is the blind dedication with which people follow the decisions of their tribal leaders.

Was there not a single soul brave present to challenge the decision, who could have stood against such a heinous punishment?

I agree that the elders or ‘panch’ have their importance in the tribal or caste system. In some tribes, the chieftain has sole control of the tribe’s resources and is the one who rewards the tribesmen with bread and money for their services. He is the one who decides who lives and who is exiled but the fact that people can witness a daughter, a sister, a niece or a friend getting raped with no consciousness whatsoever is beyond me.

It makes me feel hopeless about the illiterate people living in South Asia, who, unfortunately, constitute as the majority of the population.

What have we become?

Is this the method we’re opting for punishing women or is it a way to fulfil our monstrous unfulfilled desires?  Is this the way we are choosing to gain cheap sexual gratification? To get rid of our sexual frustrations in the name of law, in order to teach a haunting lesson to the current generations and the generations to come?

What happened in West Bengal, will happen again.

What happened in that small village, where this girl was so brutally deprived of her dignity as a woman, can be happening around us right now.

When will we, the masters of women, be strong enough to save a girl from falling apart like this?

Will we ever find within us the ability to treat the fairer sex as humans are supposed to be treated or will we look the other way and be oblivious because it is not happening to us and hence, let the powerful do whatever they want to do in their little village far away?

It is happening around you as we speak.

If we don’t nip the bud now, it can and will happen again!

Now it is outside your doorsteps. Tomorrow it might happen inside our doors.

So wake up, you educated fools; karma is a friend to no one. Today you will turn a blind eye to it; tomorrow it will come bite you. Wake up…

The author is completing his majors in English Literature. He has a keen interest in IT, loves to design websites and graphics, is an avid photographer and a nationally acclaimed dreamer. He tweets @shahrezqureshi (twitter.com/shahrezqureshi).