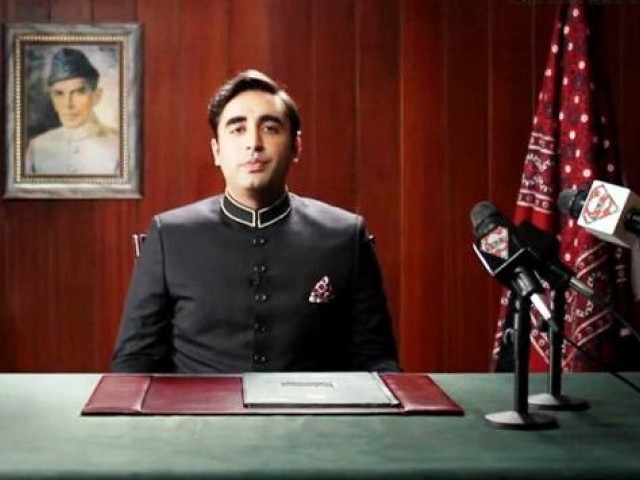 Bilawal Bhutto spoke of sticking to the original cultural values of Sindh but I fail to understand how exactly can Sindhi culture be preserved by wearing a Superman t-shirt customised in Sindhi ajrak colours?

It was quite entertaining to watch Bilawal Bhutto speak of Sindhi culture, dressed up in a presidential style sherwani and speak in roman Urdu. The most amusing part of the ‘address’ was him putting all the blame on successive governments for the destruction of Sindhi heritage.

What Bilawal did not notice, or his speech writer probably overlooked, was the fact that Sindh has predominantly been ruled by his own political party, PPP, which for the record, hasn’t been able to carry out any development work in any of its strong holds in interior Sindh and has, instead, destroyed whatever little heritage was left.

The main powerhouses of the province of Sindh, Karachi and Hyderabad, were severely neglected under the PPP rule.

In fact, all the development witnessed in urban Sindh was during the tenure of President Pervez Musharraf led MQM-PML-Q coalition setup.

Bilawal spoke of preserving the Sindhi culture by announcing a cultural coup. These statements could only have been made by someone sitting comfortably in a fortress or thousands of miles away. He spoke of sticking to the original cultural values of Sindh.

On that note, what I fail to understand is how exactly the Superman t-shirt he is wearing, customised in Sindhi ajrak colours, going to preserve Sindhi culture?

Is there some new-age ‘burger culture’ on the rise that is replacing age old beauty and aesthetics?

Where is our exclusivity?

What message are we giving to the rest of the world about our distinct heritage?

His audience, a relatively backward yet extremely proud lot, will not be able to relate to him if he wears funky t-shirts and carries an ‘I’m too cool for school’ persona.

His grandfather, Zulfiqar Ali Bhutto (ZAB) was one of the finest leaders this country ever produced. ZAB interacted with his countrymen in an ‘awami’ way and the masses could relate to him and the love and respect they had for him is evident even today.

On the contrary, with such theatrics and comical bursts of childhood, Bilawal will certainly cause his grandpa’s legacy to take a nose dive and within no time the young Bhutto’s leadership qualities will be questioned within his own party tiers.

What needs to be done

What Bilawal needs to do is understand the actual values and norms of his province which he happens to visit once in a blue moon.

In order to create an impact, he will first have to recruit competent and sensible consultants and advisors who can groom him in accordance with the needs of the modern times besides striking a balance between rural and urban life styles. They can also guide him as to how he should carry himself as a politician, how he could relate to a common man in the villages and how he could mature in terms of issuing political statements.

The province of Sindh has a rich culture that needs to be preserved. Restoration of historical sites like Mohenjo-daro and Harappa, organising cultural weeks, discouraging the feudal mindset and promoting hard working farmers and skilled men and women from rural Sindh can genuinely strengthen the culture of this province.

What we witness in the name of cultural shows in Karachi is display of firearms and uncivilised young men from the villages roaming on the streets of Karachi, brandishing sophisticated weapons and shooting in the air at Sea View. This needs to be discouraged and rather more civilised ways of promoting culture should be adopted.

The culture of the province can best be promoted by turning Sindh into a tourist friendly province with the best possible site seeing facilities and tour setups.

For all of the above initiatives, the government of Sindh, led by Bilawal Bhutto, will first have to improve the law and order situation of the entire province.

A complete eradication of the ‘daaku’ (burglar) culture in interior Sindh, fighting against the feudal mindset, eliminating extremist pockets from the province, creating jobs and spreading the message of love and peace along with an environment of co-existence among the religions and castes are the first few steps that need to be taken.

Only then shall we expect true cultural promotion in the province, this time in a more systematic and civilised manner.