If she can walk around in skin-tight clothes, why can’t I wear my veil? 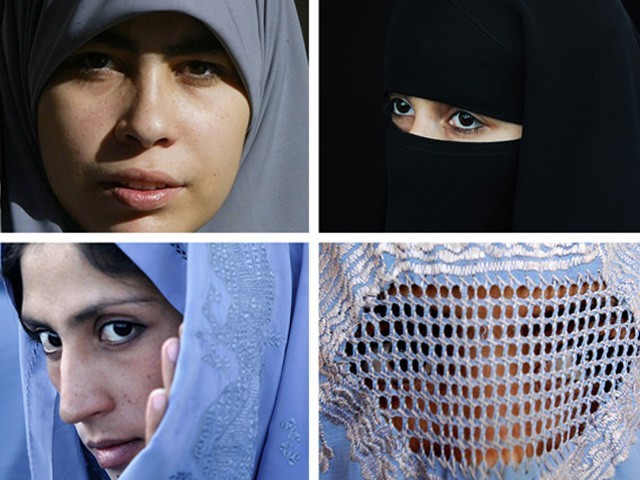 In opposition to oppression, I feel a wonderful sense of freedom in my hijab. I feel protected and sheltered. PHOTO: AFP

Many people believe that the Islamic veil represents extremism, that it is a symbol of oppressing women. In April 2011, we saw France becoming the first European nation to ban the wearing of the veil in public. Several other countries, like Germany, Italy and Belgium among others, took inspiration from France and passed legislations banning the ‘hijab’. The irony is that even in the so-called Islamic Republic of Pakistan, a few schools forbid the wearing of the veil.

“The director of Karachi Grammar School insisted I abandon my veil if I wanted admission there. Apparently, it was against their policy.”

The extremism concept works both ways. To be against the veil is one thing but to actually ban it and forcibly prohibit Muslim women from wearing it is the secular extreme. The veil is a religious issue, and hence, a highly personal one. To prevent women from wearing the veil is patriarchal dictatorship at its worst. The NGOs and feminists demand freedom and independence for women from their society. They argue that complete liberation of women will be only achieved when women will be allowed to do as they please. However, these organisations are strangely silent on the veil issue. This is inexplicable.

If a woman is allowed to saunter along the Karachi beach in skin-fitted Capri pants and shirt, a woman should be at complete liberty to walk the same length of a beach in the hijab. After all, in the industrialised pre-modern society we inhabit, the individual choice culture is prioritised. Insofar as the action of the person is not destructive to the social order and stability of the society, the person in question should be allowed to carry out the action he or she desires. It is true that in official, government-run places, like the court, NADRA or passport office, check-posts, prison or hospital, an identity check is imperative. In such cases, the veil-wearing women are perfectly willing to cooperate. They will show their faces if and when required.

Our reasons for wanting to cover our faces are very straightforward and simple. Firstly, it is the way we interpret a particular verse of the Holy Quran which tells women not to publically display their beauty or adornment (24:30). There are various interpretations offered for this verse and it is a basic human right to be allowed to follow one’s own religious leader’s interpretation, as long as the belief is not detrimental to the social security.

Some argue that the verse does not mention the covering of the face whereas some argue it does as the verse includes the word ‘zeenat’, which simply means beauty. And because one’s face goes a long way in determining how beautiful and attractive one is, women feel obliged to hide it as per the command in the Holy Quran.

I believe the veil maintains the social order of the society. Amina Ahmed, a trainee journalist in the UK, published an article in the Guardian titled, ‘My Niqab is my Identity’, where she refers to this conception as,

“A verse in the Quran tells us to cover our beauty and lower our gaze and to be modest so that we are not taken advantage of – and so that there are no out-of-marriage relationships, unwanted pregnancies and a society where children do not know who their father or mother is. It is not to oppress us, rather give us the privacy and respect we deserve.”

In opposition to oppression, I feel a wonderful sense of freedom in my hijab. I feel protected and sheltered. It gives me the privacy I desire and yearn for. Being a Muslim woman, it is part of my identity and it defines who I am. To have others dictate my mode of dressing by banning the veil only shows how rigid and inflexible people with power and authority can sometimes get.

It is my choice, it wasn’t enforced upon me. I admit there might be women out there who were forced into wearing the veil. But I’m not one of them and there are several other women like me. By banning the veil, the pattern of coercion actually just continues. Women who did not want to wear the veil were forced to wear it because they were probably ordered by the domineering men of their families. And, consequently, if banned, women who originally wanted to wear the veil would be prohibited from wearing it, forbidden to do so by the ruling state.

Either way, both scenarios boil down to compulsion and that is an ugly word in this era. Banning should not even be an option. I believe it is high time for people to dump their bias and prejudice towards what is simply a matter of one’s own choice.