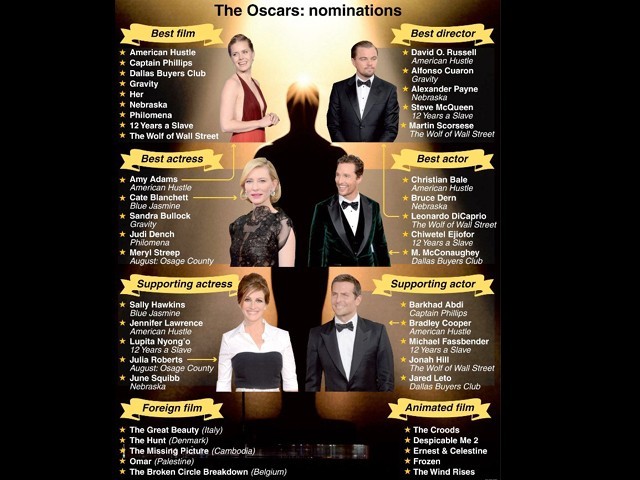 The year saw the triumph of documentaries such as The Act of Killing, the emergence of acting careers with the likes of Mathew McConaughey and Bruce Dern and the introduction of low-key Indie style filmmaking into mainstream cinema with Inside Llewyn Davis. PHOTO: AFP

The year 2013 has been a fantastic year for films – a film about an HIV positive patient, another about the smirk of a drug lord with metal teeth; one about a lesbian love affair and another showing the re-enactment of a genocide.

The year saw the triumph of documentaries such as The Act of Killing, the emergence and success of acting careers with the likes of Mathew McConaughey and Bruce Dern, and the introduction of low-key Indie style filmmaking into mainstream cinema with Inside Llewyn Davis. These elements made 2013 a very special year for the world of cinema.

Although some of my personal favourites did not make it on the list, one thing is for certain – it will be quite a competition this time around. A number of its critics believe the Academy not to be impartial when it comes to handing out the Oscar and claim that melodramas and historical epics are much more popular with the Academy than comedies. They also assert that actors who play in biopics have a better chance of receiving the golden statue than fictional ones.

I personally think that most of the criticism is quite valid. And so, in this list I have decided to examine the major nominees and have dissected it into two different categories – who I think should win and whom the Oscar might actually go to.

So, here is my dissection of the list of nominees for the 2014 Oscars:

I believe that Her is one of those films that not only visually stands out from the rest but compels you to become emotionally engaged with the protagonist. Although I believe that the Oscars snubbed Inside Llewyn Davis undeservedly, Her is still the most deserving film on the list in my opinion. But Gravity seems to have won their hearts with its visual effects and will probably grab the gold.

Yes, it is a good film but certainly not the most innovative film on this list – at least not that I think.

Best actor in a leading role

When I saw this list, my first thought was,

But looking at the list a bit more closely, I realised that this one was really close competition. Sticking to the list, this is what I think.

It is tough but I think Ejiofor manages to win just a notch over McConaughey and what a great year he has had!

Sorry Leo, you were great but better luck next year maybe.

Best actor in a supporting role

This was another tough one, but for me, Bradley Cooper brought just the right amount of craziness that the role required, while Jared – although good – was more of a generic character whose sole purpose was to serve McConaughey’s character to become more ‘open’ towards his fears.

His performance lacked the originality that Cooper brought onto the screen.

Best actress in a leading role

Again, my first thought on seeing the list was,

“No Greta Gerwig for Frances Ha?”

But coming back to the list, I have to admit that I have never been a fan of Bullock’s acting – that is, until now. Apart from the spectacular visual effects, she literally carried Gravity on her slim shoulders. As for Blanchett, I really thought her performance was a tad too eccentric for its own good.

For more about my ‘unpopular’ opinion, read my review for Blue Jasmine.

Best actress in a supporting role

The Oscars and I in complete agreement?

Although Sally Hawkins did a wonderful job, Lupita’s performance as a pre-civil war slave was simply outstanding. And I hope that she has a long career ahead of herself.

Due to a disarrayed release of the film worldwide, a large group of moviegoers have yet to see Miyazaki’s last film The Wind Rises and I happen to be among the unfortunate ones.

However, I do think that Frozen has returned Disney back to its ‘princess’ roots and most probably will charm the Academy.

My opinion: The Grandmaster

Cinematography was at its peak this year and all these films were a treat to the eyes. I do not think I would be disappointed if any of them took home the gold but in the end, I would vote for the visual storytelling of Wong Kar-wai’s The Grandmaster.

Scorsese is like vintage wine – he just gets better with age. Some of DiCaprio’s monologues in The Wolf of Wall Street were superbly directed with looming crane shots over the crowd of stock brokers and a heart tromping conversation with Mathew McCounghey.

Sure, Cuaron’s direction in Gravity is impressive to say the least but Marty, you deserve this one!

My opinion: The Act of Killing

The Oscar might go to: The Act of Killing

There are only a handful of recent films which I can watch and say,

And The Act of Killing is one of them. I really hope that the Academy also recognises this masterpiece of filmmaking that has significantly changed the way documentaries are viewed now.

A truly amazing piece of work it is.

My opinion: 12 Years a Slave

Although a tough call between American Hustle and 12 Years a Slave, I think I will vote for the latter with its  non-generic editing and long takes which proves that sometimes less is definitely more. Its editing gave it the breathing space that such an intense subject needed.

But alas, Gravity is likely to be the favourite to win this one.

Gravity has some of the best visual effects display ever put to film, hands down!

My opinion: The Hunt

A Fellini-esque display of looming camera work and storytelling, The Great Beauty will certainly tickle the Academy’s fancy. But unfortunately, this story has been told time and time again and The Great Beauty is not quite as unique as one would think. On the other hand, The Hunt took a delirious, yet carefully calculated path of dealing with false accusations and rumours that can end up destroying lives.

In my opinion, fortune should favour the bold here.

My opinion: Spike Jonze for Her

The Oscar might go to: Eric Warren Singer and David O Russell for American Hustle

One of the few problems that I had with American Hustle was the lack of a coherent script. But when it came to originality, Her just knocked this one out of the park. With its sharply written dialogues, I could not have predicted where the film was going even for a single moment but I loved every moment of it.

Too bad the Oscars will most likely overlook this aspect.

My opinion: 12 Years a Slave

Not many writers could pull off such a complex adaptation while still remaining so faithful to the true story of Solomon Northup. John Ridley did so and he deserves to take home the gold.

Looking back, there are in total four categories where I might be in complete agreement with the Academy of motion pictures. It is apparent that Gravity might be the favourite to win the most Oscars and it is such a pity that many brilliant low-key films like Frances Ha or Before Midnight will probably get almost no recognition.

But in any case, one should always remember that awards do not make the film great.

It is the test of time that does.