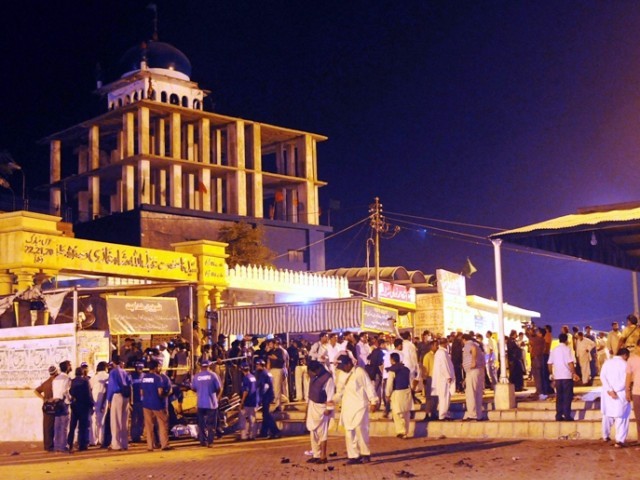 Two blast occurred at the entrance of the shrine of Sufi saint Abdullah Shah Ghazi on Thursday PHOTO: AFP

It’s been a while since I wrote about my country’s current state of affairs or the multiple attacks that continue to make me believe I’m a soldier living in a war-zone.

On any given panic-holiday, I meet my friends for brunch and talk about how good it feels to finally have a day off – you will never find us complaining about some extra hours of sleep. You see, we Karachiites are completely desensitized to disgustingly worrying levels of poverty, bomb threats and suicide attacks. Living in Karachi, you grow up and you learn to toughen up and just deal with things.

We pretend nothing is wrong.

We learn to joke about the most degrading and appalling of situations.

I am a Muslim by birth. I don’t usually pray five times a day and sometimes I do doubt God when things get hard. I may not be the nicest person you know. I may not always fast every year. But I do know that Islam is a religion of peace. The predominant theme in our Holy Book is that of forgiveness; we start every act declaring that ‘Allah is merciful and forgiving’.

I have no idea what is going on. How can people misinterpret something so clear?

I am being very reasonable when I admit I believe that human conflict is perhaps inevitable, but there must be a sense of morality. We have descended into monstrosity.

Of course, we hate international political interference. We will have a fit of rage when members of our families die because of non-stop senseless drone attacks and we will get angry when the Americans try to bully us and buy us with money. We will get peeved when they mess our country over and find stupid reasons to attack it and believe terrorists dwell in it but we must always remember that the nobility of a cause is forever tainted when stained with the blood of innocent people.

Suicide bombers in Pakistan and Afghanistan now kill thousands of Muslims a year… innocent people going to pray or shop in the marketplace, their only crime being in the wrong place at the wrong time.

When will mankind believe that Islam really does represent what its name stands for: Peace.

The constant fear, lack of security and the ease with which lives are lost or taken, is nothing short of the norm in this great Islamic republic.

Welcome to my world.

The world of hate, hope and suicide attacks.