Say no to dolphin shows in Pakistan 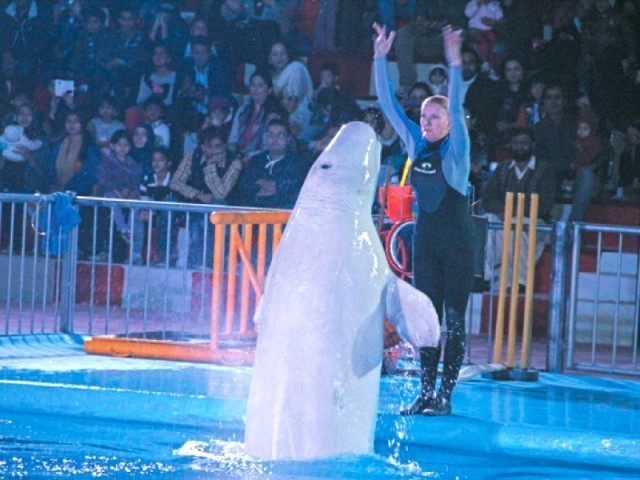 A campaign was designed in the US under the name ‘Empty the Tanks’ against dolphin captivity while in Pakistan we heard of dolphin shows being organised by the Maritime Museum. PHOTO: AYESHA MIR/FILE

Imagine a seventeen-year-old, full of energy, vigour and liveliness, always ready to get up and do something. Now, imagine confining these young, vivacious teenagers to a closet and training them to perform and entertain an audience.

Does that make sense?

This is exactly what we do to dolphins.

A dolphin is a mammal just like us and the brain activity of a mature dolphin is second only to humans. They love to swim at 140 nautical miles a day, they migrate in social groups known as pods, hunt for live fish and help each other nurse their young. Moreover, as most of us have seen live or on TV, they are extremely friendly with humans as well.

And what do human beings do to them in return?

We confine them to a small pool and force them to entertain the audience in ‘Dolphin Shows’.

Quite frankly, it is terribly inhumane.

Research has shown that dolphins die prematurely in captivity because they are innately unsuited for confinement. They are meant to be wild and free-swimming animals and confining them to small tanks or sea-pens disrupts their overall behaviour and affects them biologically. Even the largest pool or tank cannot compare to the vast and natural environment of the open sea which allows them to evolve as natural survivors.

And no one should be fooled by the attractive and ‘natural-looking’ backdrops which some dolphinariums add to their pools.

Some of the dangers that dolphins face while confined to pens or tanks are:

And the fact is that dolphins are not meant to perform for our amusement.

Japan and the dolphin crisis

Although the recent slaughtering of dolphins and whales in Japan has sparked uproar the world over, this is not a cause that has been taken up recently.

Almost half a century ago, former dolphin trainer Richard O’Barry – more commonly known as Ric – embarked on a long and arduous campaign against animal captivity and the use of animals – particularly dolphins – being used for entertainment.

His global efforts have even been featured in the 2010 Oscar-winning documentary The Cove, a film that shows the massive slaughter of dolphins annually in a small coastal village called Taiji in Japan.

Marine parks and aquariums buy untrained dolphins from Japan and the money paid by the dolphin show industry fuels the hunts which supply aquariums and dolphinariums worldwide. They also fulfil the meat demand of Japan and the rest of the world. Dolphin hunters are equipped with the latest boats, scuba divers and nets, and have set up coves and sea pens for the captivity of the unfortunate dolphins.

The capture of dolphin pods in the open sea is itself a torturous process.

Pods are forced to move towards the harbour by boat drive motion and the dolphins are banged on their heads to reduce their swimming speed. They are then caught in the net and transported into the sea pen. Some of them get injured as they splash frantically in their struggle to escape, while others get injured from the motor blades of boats. The ones who get caught are also tortured so they stay in control.

At Taiji Island, aquariums and dolphin brokers also help the dolphin killers in their work, picking only a few for captivity. The rest of the dolphins are killed for meat that is poisonous and should not be consumed by anyone.

Traditionalists argue that these hunts are part of the Japanese or Taiji tradition. But that is not true. These hunts began some 45 years ago and have continued to gain momentum due to the material gains they bring.

The UK government freed the last captive dolphin way back in 1993 when they obtained feedback from school teachers that dolphinariums do not generate any educational aspect and only serve to entertain. And in July last year, a campaign was designed in the US under the name ‘Empty the Tanks’ against dolphin captivity.

Today as the issue has heightened to an almost unbearable degree, criticism and activism continues to pour in from all corners of the world. But in spite of the constant and increasing criticism by conservationists, activists and government officials – such as Ambassador Caroline Kennedy – the hunting and slaughter continues unabated. According to reports, fishermen have already killed over 170 dolphins and small whales and taken 24 captive since the beginning of 2014.

And with Kennedy’s regular updates and criticism on Twitter, what began as an environmental and conservation issue, is now causing a rift between Washington and Tokyo – normally the staunchest of allies.

Pakistan’s entrance into the arena

In Pakistan dolphin shows and the training of marine animals are suddenly springing up. Although the authorities in Pakistan have claimed that international standards are being maintained to take care of the animals, it is like fooling ourselves since captivity in any form is still captivity and should not tolerated.

Moreover, I am shocked that the World Wide Fund-Pakistan (WWF-P) and the International Union for the Conservation of Nature (IUCN) – world leaders in marine life conservation – actually permitted this event to take place without any objection.

My fear is that since the population of third world countries are naïve about environmental protection matters, this industry might flourish at double the pace than any other industry in the country. After all, if today the authorities have no concern about organising a dolphin show in the name of entertainment; tomorrow they will be happy to invest in the captive industry of these sea mammals, in their drive for personal gains.

Already, the management has expressed plans to extend shows to other cities of the country depending on the response of the public. This will require these animals to be transported which will cause even more discomfort to them.

The least I would expect from the IUCN, WWF and the wildlife department of Pakistan would be to stand firm against the inhuman transportation of these animals and warn airlines as well as road transporters both, that they will be fined if they undertake this task under the pressure of the museum and the organisers.

But I wonder if our government – which has still not been able to stop the hunting of  rare falcons in the interiors of Punjab by the Arab sheikhs– will really be able to take action against the inhuman capture and slaughter of dolphins in the country.

Need of the hour – save the dolphins today

In my opinion, the general public in Pakistan and abroad can do a lot to protect this endangered species. We all know that every creature has a role to play in its habitat and hence, every creature needs protection in order to ensure the smooth functioning of the entire planet. I know that it is enthralling to watch the tricks performed by dolphins, belugas and sea lions but we need to realise that one admission ticket could also permanent damage to one of these lovely creatures.

We need to learn from Ric who set up SaveJapandolphin.org under the umbrella of An Earth Island Institute Project to address the plight of dolphins in the name of humanity. His request to the public was,

In light of what is happening in Japan today, it is easy to understand his perspective. Today if we look forward to being entertained by captive dolphins, tomorrow our conscience may not react even to the inhuman hunting and slaughter of these friendly animals.

According to O’ Barry,

“It is bad education. What are children learning from dolphin tricks? They are learning that abusing nature is okay, that these (dolphins) are nothing more than performing circus clowns. And they walk away from there, uneducated.”

So, stand up today and say ‘No’ to field trips to dolphinariums.

Say ‘No’ to restraining these and other animals to confined spaces instead of letting them live in their natural habitat.

Say ‘No’ to such cheap and inhumane ‘entertainment’.

She worked at Aaj TV till 2008, freelances currently for Express Tribune and Dawn and is associated with a television commercial production company.

Beat the price hikes with vegetables of your own