Jinnah may not be a hero to you, Mr Hanif, but he is to me and to many other Pakistanis! 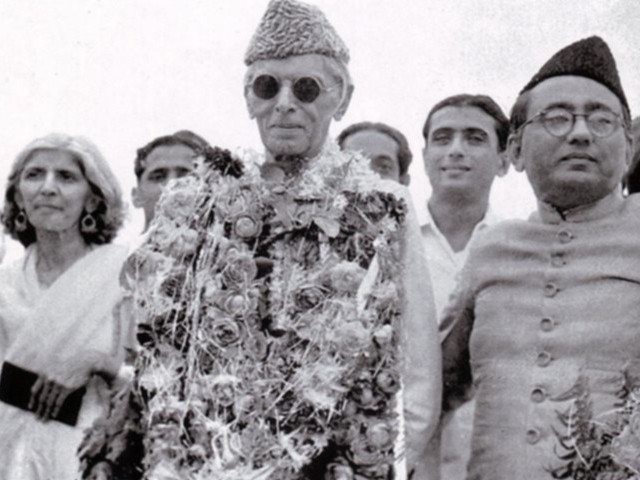 There is a reason why history netted him the title of ‘Quaid-e-Azam, the Greatest Leader’. PHOTO: FILE

Every sane individual enjoys the birth right of maintaining a private worldview. Democratisation of the world has granted unbounded and everlasting socio-religious and political freedom to the individual and society. The state’s dictatorial control has sunken into the past. No one can, therefore, force one’s opinion on other fellowmen in this democratic world of our times.

However, there is a limit for the expression of opinions, especially when it comes to the collective interests and issues concerning the people.

You cannot, for instance, speak positively about Hitler and negatively about the Holocaust across the United States and European continent.

You cannot call an African American a ‘negro’ in the US or question the atrocities committed in the 1971 war against the Bengalis.

In plain words, every country has a set of norms and traditions, which, even though are not stated in the constitution, have to be followed by the countrymen as well as any foreigners visiting or residing in that particular country.

The image of the father of the nation, Quaid-e-Azam Muhammad Ali Jinnah, is such a collective ownership of Pakistani people that they acknowledge it as a matter of honour and self-respect. No true Pakistani can bear any negative thoughts expressed about Jinnah. We, Pakistanis, love him and view him as our political role model.

On January 19, 2014, in his interview with The News, writer and journalist Mohammad Hanif spoke about Jinnah in an extremely demeaning manner. He ridiculed Jinnah’s political vision of ‘unity, faith and discipline’ as being too childish and declared that his semblance was that of a PT teacher. He further asserted,

Hanif’s viewpoint only shows his ignorance of the pre-partition history of the subcontinent and Jinnah’s untiring and uncompromising struggle for a separate homeland for his people.

Hanif isn’t the only one I’ve come across who speaks ill of Jinnah.

There is a long list of people who have spoken negatively about him on national and international forums to earn cheap fame. Pakistan Peoples Party (PPP), for one, has a track-record of playing down Jinnah’s image. They, as a party, attempted to replace the venerable epitome of ‘Quaid-e-Azam’ with the fabricated ‘Quaid-e-Awwam’ for Zulfiqar Ali Bhutto but without reasonable success. Even Haakim Ali Zardari, former President Asif Ali Zardari’s father, called Jinnah the ‘misguided son of a madman’ a few years back in an interview on TV.

Jinnah’s measured struggle for Pakistan is well-documented in the annals of history. Chroniclers witness it was Jinnah who forced the British to divide the subcontinent and the Congress leadership could not escape this fate of India. It was again none but Jinnah who was branded the ‘Ambassador of Hindu-Muslim unity’ by the leaders of their time.

We always forget that Jinnah was the biggest advocate of ‘united India’ until he realised, during the Calcutta annual session of the All India Congress (1928), that such a dream could never come true.

For him, it was the partition of the ways. Jinnah abode by every word he ever said and this is why history earned him the title of ‘Quaid-e-Azam’, the greatest leader.

Stanley Wolpert is considered an academic authority on Jinnah. The first sentence of his renowned book ‘Jinnah of Pakistan’ reads,

“Few individuals significantly alter the course of history. Fewer still modify the map of the world. Hardly anyone can be credited with creating a nation-state. Muhammad Ali Jinnah did all three.”

Jinnah may not be a hero for those who are avowed enemies of this country and lovers of the so-called ideal of ‘Akhand Bharat’ (undivided India). They were perhaps born on this side of the border by mistake, for they owe allegiance from all their soul and heart to our eastern neighbour. Their ‘sublimely ascetic and nationalist’ heroes happen to be on the other side of the border. Quaid-e-Azam appears only a foreign creature to such pseudo-intellectuals.

No historian can point fingers at Quaid-e-Azam for any moral or political lapses. Quaid was viewed as the truest statesman, a positive and law-abiding politician, and above all a ‘gentleman’ by the Indian political elite.

However, it is unfortunate that we are unaware of the greatness of Jinnah and remain indifferent to his persona and legacy. We must stop this practice of being insensitive to sensitive issues like disrespect for Jinnah. I would like to sum it up in the words of Lawrence Ziring, a professor of Political Science at Western Michigan University.

“What is clear about Muhammad Ali Jinnah is that he is little understood outside the country that he was chiefly responsible for creating… (His) inner confidence and dogged perseverance (which) frustrated the intentions and purposes of the powerful must continue to ‘bear the stings and arrows’ of the unreconciled mourners of Akhand Bharat.”

Jinnah is a sacred name for us, not just because he created this country for us, but also because he deserves all the praise which is attributed to him.

People need to understand that talking negatively about him might give them the status of a pseudo-intellectual, but they should know their boundaries while criticising the father of the nation.

You may not believe in him, but there are thousands, millions even, who do – no point offending them.

The author is an English Literature graduate from Punjab University. He has authored four English and Urdu books. He also chairs the research network known as Bab-ul-Ilm Research Foundation (BIRF) in Pakistan.