Protests in Egypt, Turkey and Brazil for the people, protests in Pakistan for the politician? 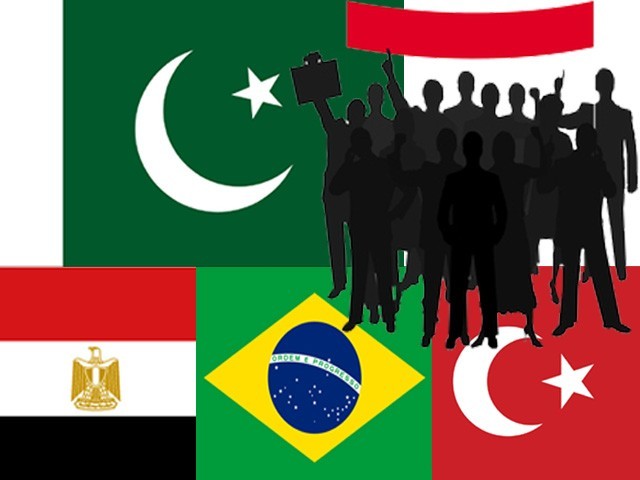 We are producing civilisations with different ideas, civilisations that will not be willing to accept each other at a tolerant level.

Since the past few months, the protests in Cairo and the recent ones in Istanbul and Rio de Janeiro, really made me ponder upon what the real problem in these countries was and why their people were on the streets – all the time.

Are these countries worse than Pakistan?

The economic indicators paint a completely different picture and tell us that countries, like Egypt and in particular Turkey and Brazil, are doing great in terms of Gross Domestic Product (GDP), the Human Development Index (HDI) and the food index. In terms of peace and national violence, these countries are doing better except for Egypt, which has recently started facing on-going turmoil.

Yet, people seem to have a problem and are taking to the streets, why?

Imagine a country where people are protesting as a result of false promises made by their so-called well-wisher politicians. Pakistanis will not have to stress their imaginations too much – we have been witnessing this for a while now. Before the 2013 elections, every respective party made promises to do this and accomplish that, but when they got our votes and gained power, the whole façade disappeared into thin air and there was no change to be seen at all.

You don’t need to be a rocket scientist to understand politics; all you need is to learn the basics upon which policies are implemented. The government never intended to catch tax evaders or broaden the tax net. Maybe they intend to implement the promised policies in the future or maybe they were just words to get votes. Yet, the people in Pakistan don’t find it necessary to step out of the comfort of their homes and onto the streets like we see in Brazil, Turkey and Egypt. Not unless some opposition leader tells them to.

Let’s start with Egypt’s complex situation. For the first time in decades, the people of Egypt managed to overthrow former President Hosni Mubarak in 2011 and elected Mohammed Morsi as their new president instead. Morsi won the elections by 51.7%.

But the people of Egypt were still not happy with his presidency and decided to carry out large demonstrations. Eventually, the Egyptian army presented Morsi with an ultimatum and with the help of a military coup, Morsi was ousted.

Pakistan has been governed by both military dictators as well as democrats. The country’s performance during its military dictatorship improved in terms of the economy. This is because the military dictator is not answerable to anyone, at least not during the initial years of governance, whereas a democratic leader has to greatly consider the people’s high expectations. But unlike Egypt, Pakistan hasn’t been given the opportunity for a continuous military regime for decades.

In Turkey and Brazil the situation has been different compared to Egypt’s. In Turkey, people took to the streets because of the government’s disregard of the country’s historical architecture; they planned on restructuring the Istanbul Taksim Gezi Park. The people opposed to the increasing assertive Islamic administration, which brought together people from leftist to rightist, Kurds, liberals, socialist and nationalists against Prime Minister Recep Erodgan.

Matters for Brazil worsened when the government decided to increase bus fares by 10 cents and as expected, the people became angry and decided to speak up against it. Even though Brazilians love football as much as we Pakistanis love cricket, or maybe even more than that, they protested against the huge investments being spent on stadium constructions rather than investing in education and public transportation.

If we compare their situations with Pakistan’s, clearly the situation differs vastly. We take onto the streets and protest when the leaders of our respective parties call for it, which is understandable on the basis of admiration and fervour. But when people participate and walk out of their homes without any influence that is something entirely different.

Such was the case of Shahzeb Khan’s murder case or the Chief Justice Iftikhar Chaudhry movement. Both of these movements were classified as extreme cases as in the former case, a 20-year-old was shot point blank because of an insignificant issue and the latter involved lawyers and certain political parties protesting against the unfair dismissal of the former chief justice.

Evidently, the Turkey and Brazil protests were completely different. Why should we protest and come to the streets when a leader calls for it? Why can’t we merely rise to the occasion of fighting for injustice and voicing our opinions on something that we actually believe to be wrong and unfair?

According to an article published on The Guardian, the reason behind people coming to the streets in Brazil, Turkey and Egypt is lack of opportunity for people to come to a platform and raise their voices. They are left with no other option but to protest, at least that being the case for the people of Egypt. During Mubarak’s regime, there was no opposition and thus peoples’ reaction was similar to the erupting lava from a volcano. In short, people were not given the opportunity, the freedom through which they could voice their concerns.

All these protests in Turkey, Brazil and Egypt have one thing in common – divergent political groups, and socially and politically aware people. I am not referring to the opposition parties present in these countries. In fact, these protests were eventually joined by different political parties and factions.

When you dig deeper, the answer is quite simple in Pakistan’s case – our nation lacks education. Our education system has become even worse.

Primary school enrolment was encouraging more students to be in school as compared to a decade ago, but as you move towards secondary enrolment, the ratio drops dramatically, resulting in a more than 50% drop. The situation worsens at the tertiary level with a less than 10% enrolment.

Apart from our flawed education system, private institutions have been doing well in terms of education, but that education is only beneficial for the rich upper class or upper middle class folks who can afford it. The situation in public schools is only going from bad to worse as only two per cent of the budget is being spent on education. Then to complicate matters further, we have different systems; Urdu-medium and English-medium, madrassas, entry test for universities and the CSS exam. What kind of impartial system is that?

We are producing civilisations with different ideas, civilisations that will not be willing to accept each other at a tolerant level. We go onto abandoning whatever miniscule threads of sophistication are left when great scholars like Mr Javed Ghamidi are forced to leave the country for their own safety or when brave souls like Salman Taseer and Chaudhry Aslam are taken away in the name of faith.

We should have a system where we can provide and teach comparative religion alongside other subjects in respect of people’s religion, cast and colour. The situation cannot be improved in a snap of a finger but the seeds must be sowed today to have a better future for the generations to come.

Education provides our future generations with different paths to walk on and more importantly, the unaware social strata can be controlled logically and rationally rather than blindly following a leader on the basis of his or her policies, vision and ideas.

“There are two ways to control people, frighten them and demoralise them. An educated, healthy and confident nation is harder to govern as compared to a defeated and demoralised one.”

Pursuing a major in public administration, he looks forward to joining the public sector in Pakistan.