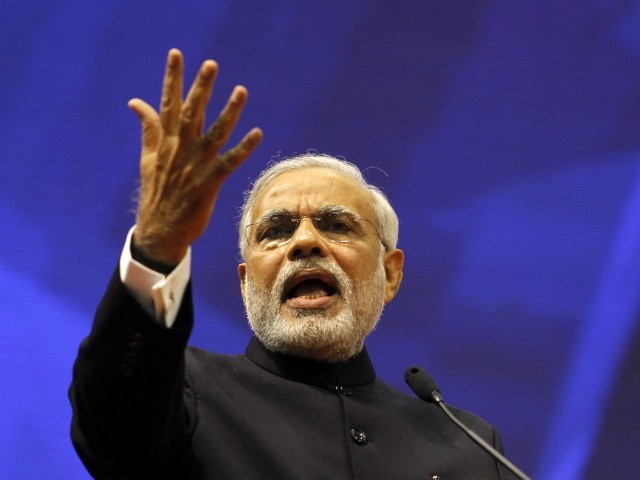 In my opinion, which is in sync with Singh, it is not in India’s national interest to have him at the top job. He will indeed be disastrous for India. PHOTO: REUTERS

“Mahatma Gandhi’s last wish was that the Congress party should be disbanded. The time has come to fulfil his wish. We must work towards building a Congress free India,” said Modi while addressing a public rally.

The Gujarat chief minister has reiterated this desire of his on several occasions.

Agreed, the Congress is corrupt to the hilt and it definitely deserves to be punished. The party’s extremely poor performance in the recently held assembly polls in five states does not bode well for its future. But, when it comes to corruption, the BJP is no different.

In my opinion, one aspect of the Congress that differentiates it from the BJP, and ought to be highlighted, is its liberal character, its emphasis on secularism and the protection of minority rights, on equality, unity in diversity, strong opposition to communalism, etcetera. In other words, its idea of India is inclusive.

So why does Modi want to eliminate the Congress from India’s political scene?

Do Modi and his supporters want to rid India of its secular values?

Do they want to subvert the idea of India by removing Congress from their path and thus pave the way for building a Hindu rashtra (Hindu nation), the unfulfilled dream of Savarkar, one of the accused in the assassination of Mahatma Gandhi?

To get the answers to these questions, we will have to examine the annals of pre-independence history and analyse Savarkar’s role in the birth of Hindu nationalism, and his association with Gandhi’s murderer Nathuram Godse.

Let’s Kill Gandhi!, a book written by the Mahatma’s great-grandson Tushar Gandhi, offers a vivid account of the events leading to the former’s assassination.

Vinayak Damodar Savarkar was born on May 28, 1883, in a small village called Bhagur near Nasik, into a high caste Maharashrian Brahmin family. Since his childhood, he had a pathological hatred for Muslims. Savarkar was a prolific writer but everything he did had an undertone of hatred and violence.

Savarkar, greatly influenced by Bal Gangadhar Tilak, a very eminent leader of the hawks in the Congress, led many student agitations against the British. The colonialists, after arresting Savarkar in England for his revolutionary activities, sentenced him to an unprecedented fifty years’ sentence to be incarcerated in the infamous Cellular jail (Kala Pani) at Port Blair, off the east coast of India.

He came out from Kala Pani a bitter religious fanatic though. His hatred, however, was not directed towards the colonialists; it was aimed at the Indian Muslims.

When Modi was asked by Reuters in an interview last year if he felt any regret for what happened in 2002, he replied by saying,

“Another thing, any person if we are driving a car, we are a driver, and someone else is driving a car and we’re sitting behind, even then if a puppy comes under the wheel, will it be painful or not? Of course it is. If I’m a chief minister or not, I’m a human being. If something bad happens anywhere, it is natural to be sad.”

Modi’s callous answer to this sensitive question speaks volumes about his thinking.

Whereas Nathuram Godse, an unemployed, self-proclaimed Hindu nationalist like Modi, came under the spell of Savarkar in Ratnagiri, a picturesque seaside town in western Maharashtra. The seeds of Gandhi’s murder were sown here.

It was Savarkar who had, in 1931, first mooted the idea of forming a Hindu Sangathana, a militant Hindu organisation, which would espouse Hindu supremacy. It was he who had in 1942, to fill the vacuum created by the mass arrests of Congress leaders during the Quit India Movement, mooted the idea of forming a Hindu Rashtra Dal – members of which would be the storm troopers of the Hindu Mahasabha.

It was he who had gifted Rs15, 000 to Nathuram Godse and Narayan Apte in 1944 so that they could launch a newspaper Agranee which would espouse the ideals of the Hindu Mahasabha and the Dal.

Savarkar was the first Indian leader to publicly say that India could never be a united country; at the Ahmadabad convention of the Hindu Mahasabha he stated that there are two Indias – a Hindu rashtra and a Muslim nation.

This was much before Jinnah’s Muslim League voiced the demand for Pakistan.

Savarkar wanted to be the leader of the Hindu rashtra and did not care for what the Muslims did with their Pakistan.

Only one man could stop him – Mohandas K Gandhi.

Savarkar hated him for this.

Under Gandhi, for the first time after 1857, the Hindu and Muslim communities had come together for the cause of independence. This worried the British very much, knowing that if Gandhi’s efforts towards uniting the people of India were to be derailed, they would have to first foment communal trouble, and second, drive an unbridgeable divide between the two communities through their tried and tested policy of divide and rule. For this, they needed Indians to do their dirty work.

In Hindu nationalist Savarkar, they found a committed ally.

Savarkar’s message to his followers was loud and clear:

“If you want to establish a Hindu rashtra, get rid of Gandhi and subvert the Congress.”

He allegedly encouraged the effort to assassinate Gandhi. They did get rid of Gandhi; Godse, his close aide, murdered him on January 30, 1948. While the nation mourned, there were some who celebrated his murder by distributing sweets and bursting crackers.

Similarly, the far right Hindutva forces in India today are aware of the fact that they cannot come to power without causing riots, driving an unbridgeable divide between the Hindus and Muslims, and subverting the secular forces.

What happened in Gujarat in 2002, they say, was just a trailer.

For they now want to implement the ‘Gujarat model’ across India. In the hamlets of Uttar Pradesh, where hitherto the people of two communities had been living together peacefully for centuries, where peace was not disturbed even during partition, today thousands of Muslims have been forced to flee their homes and seek shelter in relief camps, just for the sake of a few votes.

Incidentally, the riots in Muzaffarnagar took place days after Modi’s close confidant and BJP General Secretary Amit Shah was appointed as the saffron party’s person in charge of the politically-crucial state of Uttar Pradesh.

Alas, Modi’s whole empire has been built over the dead bodies of innocent Indians.

In a bid to make India a Hindu rashtra and turn the Muslims into second class citizens, the Hindu nationalists (read extremists) killed Gandhi. They might even succeed, as Modi wishes, in subverting the Congress; they have almost succeeded in doing so in Gujarat post 2002 riots. But, they forget that secular Indians are not depending on any one party or family.

If Congress fails to deliver, like it has, some other party will replace it. For instance, the secular, liberal votes, which hitherto went to the Congress, will now drift towards the Aam Aadmi Party. But, those millions of patriotic Indians who believe in the idea of a secular, plural and inclusive India will never let the fascist forces take over this beautiful country of ours.

As PM Manmohan Singh said a few days ago,

“It will be disastrous for the country to have Narendra Modi as the prime minister.”

Indeed, a divisive figure like Modi, whose mere mention arouses a feeling of utter disgust and contempt in millions of Indians, particularly Muslims, can never lead a pluralistic country like India.

In my opinion, which is in sync with Singh, it is not in India’s national interest to have him at the top job.

He will indeed be disastrous for India. So therefore come what may, secular, patriotic Indians like me – and there are millions of them – will never let a leader like Modi represent our beloved country.

In other words, Gandhi’s killers will never succeed in their nefarious designs no matter how much they try. For the Mahatma is not dead; he’s still alive in our hearts.

As Gandhi had once said,

“If my faith burns bright, as I hope it will even if I stand alone, I shall be alive in the grave, and what is more, speaking from it.”