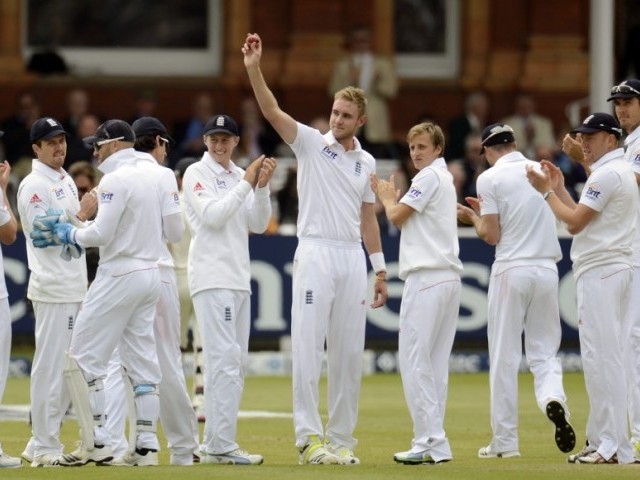 After a very long time, the English team had finally reached perfection and it was claimed that they could beat any team at any venue – which they actually did for a couple of years, before all hell broke loose in the form of the 'Ashes'. PHOTO: REUTERS

England, after ruling the Ashes series over the last few years, was outclassed by Australia by a huge margin of 5-0 and lost its beloved trophy to the victors.

After a very long time, the English team had finally reached perfection and it was claimed that they could beat any team at any venue – which they actually did for a couple of years – before all hell broke loose in the form of the Ashes (pun intended).

The Australian cricket team celebrate their victory in the Ashes series 2014. Photo: AFP

England proudly stood at its pinnacle where the team had at least three to four substitute players for every position – be it bowling, batting or even wicket-keeping.

However, the question is, did this copious amount of talent actually belong to the English soil?

England has become a sight similar to the World XI team, where the players belong to all parts of the world.

One such player, who has served England immensely and given his 100% to the team, is Eoin Morgan – Irish by origin. He made his debut from Ireland but after seeing the player’s impressive performance, the England and Wales Cricket Board (ECB) decided to bring him under the English flag.

Morgan acts as the captain of the English T20 squad in the absence of Stuart Broad and there are fair chances of him being the next skipper of both the limited-overs games. So it is safe to assume that the Irish player is benefitting England’s cricket tremendously.

They also picked up the Irish pacer Boyd Rankin, who played with Morgan.

In addition, the star batsman from the English side – Kevin Pieterson – is not originally from England either. Peterson is actually a South African by birth but he never played cricket for the Proteas. However, he has represented his native district of Natal, where he was born.

Matt Prior is also from the same league. He is responsible for a number of wins for England – especially in the Ashes – but he hails from Johannesburg.

Although the urn returned to Australia in the current Ashes series and the English side performed miserably, I do not mean to claim that players with different nationalities do not give their best for the team that they play for. In fact, as far as I am concerned, the only positive point that England had in the series was Ben Stokes – who is also not English by birth and belongs to another Aussie rival country – New Zealand.

Like Morgan, Ben also seems to be a key candidate for the future of the English team.

Indeed, there are many cricketers currently playing for England who do not have an English background – Monty Panesar, Sajid Mahmood and others. It seems like England is actually facing a dearth of native players.

These are only a few non-English players who have brought glory to England’s cricket team in recent years. Hence, although England’s team is full of extraordinary talent, very little of it hails from the English soil itself. If you take away players like Eion Morgan, Kevin Peterson or Jonathan Trott, the English people will definitely lose the flair that they currently have.

For a nation that is the pioneer of this wonderful sport, this situation can become alarming.

Is the England soil not fertile enough anymore to produce quality cricketers?