It’s useless to study in the US, stay in Pakistan! 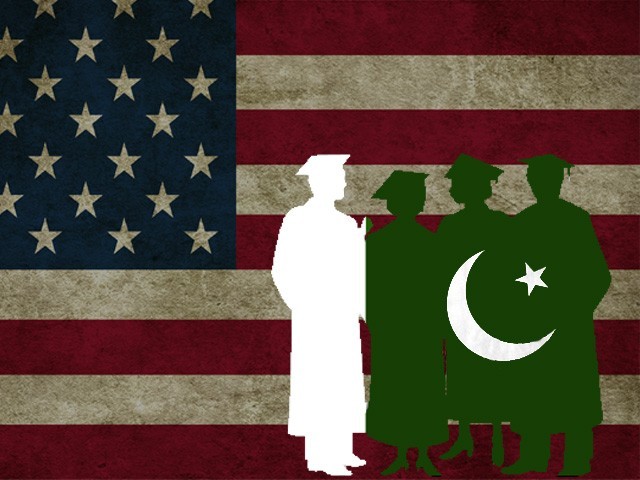 Getting an education from a foreign country is an opportunity that only a few are able to make use of. DESIGN: ZOYA ZAIDI

The education system in the US is, undoubtedly, no match to that of Pakistan. There is a major difference in the quality of education between the two nations.

A majority of youngsters living in Pakistan are encouraged to pursue their studies from abroad as the standard of education in Pakistan is awfully low. There are, however, quite a few individuals who believe that receiving education from a country such as the US is of no use.

This is a common misconception, possibly stemming from the anti-US sentiment in the country. I, however, do not agree as I believe that there are a number of factors that make the US education system superior to that of Pakistan’s. Sadly, a foreign degree in Pakistan holds more value than that of a local degree, but that is not the only reason to pursue a degree from the US. Various institutions and universities in the US not only encompass various forms of study but lay emphasis on an array of extracurricular activities, including performing arts and sports. Such activities aid in building a student’s character.

Recently, I interviewed some young individuals from Balochistan and Sindh, and raised a few questions pertaining to the education systems of the two countries. Half of them believed that getting an education from abroad, especially the US, is meaningless, whereas a few of them considered foreign education a primary choice.

Ahmed Bilal, a student from Balochistan, believes that receiving education from a country such as the US is futile. He said,

“Why should I go abroad for studying, especially to a country like the US, when I can receive similar education from Pakistan? Besides, I have a motive in life and that is to serve my nation.”

The rage I saw in his eyes for the US left me speechless for a while. Although I do not disagree with the fact that a degree from a university in Pakistan would be as prestigious, we cannot deny the holistic approach taken by educationists in the US; the experience and growth in a system in the US is regrettably denied to students in Pakistan. Receiving a degree from the US is a privilege and only few people are able to utilise such opportunities. Perhaps our youngsters should opt more for foreign education to understand how the education system works in other countries, specifically in the US.

Maria Imtiaz, a senior student from Sindh, had contrary opinions to those of Bilal’s.

“I personally believe that receiving education from overseas is an honour. I, myself, would love to go abroad to study and learn more from the people who surround me.”

Maria believes that getting an education from a foreign country is an opportunity that only a few are able to make use of.

I completely agree with her views.

“I love the US! I would definitely go there in the future to continue my studies. Sadly, there are many children who are willing to read and write in some parts of Pakistan but are held back by their families for some odd reason.”

I am in complete agreement with Mujtaba’s vital point about children who are thwarted from getting good quality education. Unfortunately, this holds true in most rural areas of Pakistan. Whether it is fear of the unknown or just an anti-US sentiment, holding the child back from achieving the best is unfair.

Lastly, I interviewed Ammar Hassan, a college student from Sindh. He said,

“I am going to stay here and study in my home country and serve my nation. I find no point in going abroad to study, especially the US.”

I was appalled by Hassan’s bitter views on western education. I was unable to comprehend why he or Bilal opposed the education system of the west. Leaving to study abroad does not in any way mean that their patriotism or nationalism is being challenged. They will not be stopped from coming back and serving their own nation. What they will acquire are skills that they may not have achieved here.

I, myself, was born and raised in Fairfax, Virginia and noticed a major difference between the education systems of the two countries. Receiving higher education from abroad is a benefit, not a loss.

The fact that we have such a rigid mindset, are not flexible towards change and stick to degrees that are common in Pakistan are some of the reasons Pakistan is not progressing in today’s world. There is nothing wrong in learning something from a nation doing better. The fact that we have an opportunity to do so, in itself, is a big deal and we should grab it with both hands and take as much advantage of it as possible. We will only progress when we learn to get out of our comfort zone and face the world.

The reason the US is a global superpower is because it provides excellent quality education and rights to its citizens. The idea to learn from the US is because I believe Pakistan can do much better; I wish Pakistan could be a nation superior to any other country in the world. Sadly, I cannot see that happening.