Eid Miladun Nabi: Creating commotion in the name of love 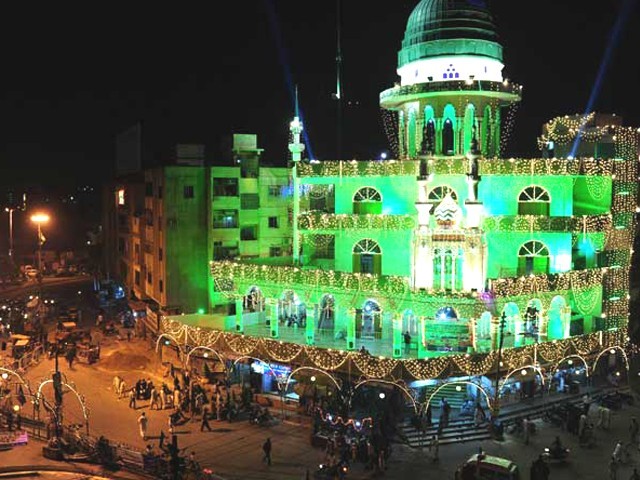 Millions of lights are put on houses, mosques and shrines during Eid Miladun Nabi and those who refrain from doing so are often termed as ‘not among us’ by those who ‘religiously’ follow this practise. PHOTO: AFP

My slumber was abruptly bothered as if I was suffering from sleep apnea. Irritated, I stretched out my hand for my mobile phone. It read 2am and it was a bitterly cold night. Rubbing the sleep from my eyes, it suddenly dawned on me that I was disturbed by Ashiqan-e-Rasool.

It has increasingly become a fashion to celebrate Eid Miladun Nabi in an extremely disquieting way that no sane human being would appreciate. Of course, those who perform these irritatingly annoying tasks would not agree with me and might even deem my statement to be sacrilegious but I beg you to think pragmatically and answer this question,

Are the acts performed during the days of Eid Miladun Nabi rationally acceptable?

During these days houses, public places, mosques and shrines are lit up on a monumental scale. Literally, millions of lights are put on these places to make them glow painfully bright and those who refrain from doing so are often termed as ‘not among us’ by those who ‘religiously’ follow this practise.

I have even seen those people lighting up their houses who hardly ever step inside a mosque to offer their prayers as well as those who are not well-versed in basic Islamic concepts such as Hajj, the six kalmas and so forth.

I wonder why these people do not spend all this money on something productive.

I know that these people will now question why ‘critics’ like me always raise the issue of productivity when it comes to celebrating religious occasions but I honestly believe that the amount of money poured in to light up houses and buildings would have a far more healthy impact on our society if spent in a constructive way.

This does not mean that zealous followers cannot express their love for the Prophet (pbuh); they will just have to do it in a manner that would have been acceptable in his (pbuh) eyes. And I really do not think that he would appreciate the extravagance that is behind the stringing up of these lights and decorations.

Recently, our youth has started indulging in another disturbing fad on the occasion of Eid Miladun Nabi. They spill out on the streets in caravans of silencer-less motor bikes with naats (religious poetry, praising the Prophet) playing on loud speakers fixed onto their bikes. What is galling is that most of these youngsters have little or no religious fervour for the Prophet (pbuh) and many of them just take this as an opportunity to show off their bikes with their killer speeds and stunts in the hope of attracting the opposite sex.

All these acts go against the basic standards of morality.

They do not care that their commotion might disturb the sick or those sleeping, nor do they care that a student might be unable to study due to the racket that they create on the streets. They do not even think that it might distract those who are actually praying and showing their devotion to God and the Prophet (pbuh) in a silent and respectful manner.

Unfortunately, it has become a pastime for these young and restless minds to disrupt the peace and to actually feel a sense of satisfaction in their absurd actions. I fail to understand why they would not rather spend this invaluable time to actually contribute to the society in a positive and meaningful manner.

If these lights and sounds were not disturbing enough, people have also adopted the trend of blocking the streets by placing carpets and traditional shamiyaanas (decoration tents) for laying out a banquet on this occasion. They have no qualms about blocking the road and causing a disruption to the passers-by.

This of course, compels people to alter their route and costs them not just time but money as well in this time of high fuel prices. But do the people who ‘religiously’ put out food and block roads care?

Such a loss of time, money and energy is a national loss which is never taken into account. A more practical and humanitarian solution would be to hold these activities in an empty plot or lawn so that passers-by and those not interested in the activities, are not affected in the least.

In my humble opinion, such an act would actually boost the goodwill among people and make them more tolerant and accepting of each other’s beliefs and practices.

It is an unfortunate fact that these gatherings for Eid Miladun Nabi in mosques and homes cannot be traced back to the Prophet (pbuh) and are practices that have been adopted over time. While I have no objection to gatherings for Milad, I am sure that all sensible Muslims would agree that using such high frequency speakers and garish lighting is not the proper way of celebrating the birth of someone who cared even for the comfort of a sleeping cat.

However, the ruckus on our roads before, during and after this auspicious occasion paints quite another picture altogether.

A blogger, poet and short story writer who loves to contribute to activities building peace, social justice and equality and has offered his services in the non-profit sector. He tweets as @iksahir (twitter.com/iksahir)

The 87th Academy Awards: And the nominees are...

9 reasons you should watch The Big Bang Theory!