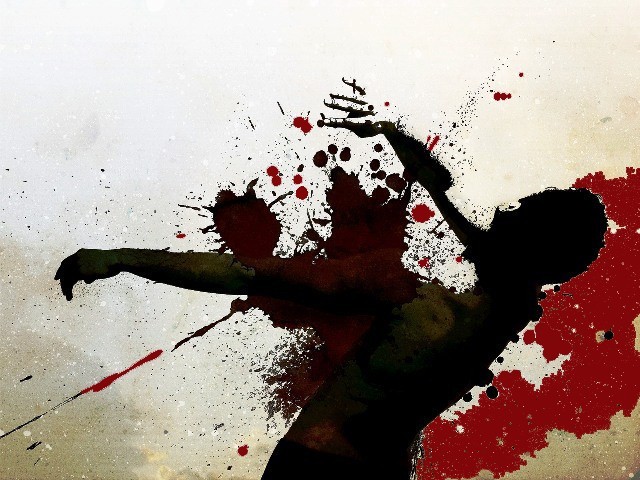 The blast took place roughly few miles away from the huge farmhouse of the property tycoon, at exactly the same time, when the spectacular fireworks started. PHOTO: FILE

(Blessed be the sacred land)

The old, rusty metal door made a creaking sound when the hunched attendant with crooked teeth and clubbed, callous fingers with dirty nails, opened it with a push of his shoulder.

He took a drag from the cigarette hanging between his beetle nut stained lips and exhaled. The smoke made strange shapes before disappearing into the thick air. A lone, low wattage energy saver hung from the ceiling with a wire, the light it emitted made everything look ghastly. Not that there were many things worth seeing.

The smell of tobacco got mixed with the strong notes of rotting flesh, congealed blood and other body fluids already scattered in the nearly empty side room of the morgue. He whacked the half full jute sack he was carrying on the floor and dragged it towards the center of the room, before emptying the contents on the cemented platform with a cracked marble slab on top.

A mix of torn, burnt, detached, mutilated body parts came out. There were fingers, toes, bits of heads that never bowed, pieces of hearts that never cared, mince of lean, mean, man meat, fragments of bones and chunks of brains belonging to literati and morons, lengths of guts, well fed and famished, entwined and entangled, in perfect and complete harmony with each other. They showed complete solidarity, the heap was a perfect example of the equality of human race; faith, unity and discipline. A glorified display of how the master of this universe created in best proportions, living in the land of the pure is worthless and fragile.

A grotesque amalgamation of once gorgeous, statuesque figures.

[email protected]#$*[email protected], the attendant cursed when a hennaed hand, once beautiful with long fingers and painted nails, slipped down. He held it gingerly between his thumb and index finger and threw it back, after removing a ring from the sausage like finger.

His job was to sort out the parts and match them to the bodies as close as possible, of the victims, who lost their lives in a suicide bomb attack, at a not so posh busy market that evening. The untouchable chohra, belonging to the lowest bottom of the under belly of the social system, casually scratched his genitals, wrapped some used plastic bags on his hands and started rummaging through the pile.

(Blessed be the sacred land)

She reached home shivering and turned on the TV. There was breaking news blaring from each and every news channel. The tickers were displaying the number of casualties, claims of responsibility from various banned groups, messages from the government that they would tackle the war on terror with iron hands alongside promises of grants, Rs50,000 for the injured and Rs500,000 for the dead, a job for the next of kin here and a dowry for a bereaved daughter there, medal of honour for the people belonging to law enforcement agencies, losing lives in the line of the duty.

Oh! They forgot, that more than half of the security forces were deployed on protocol and protection duty that night, and fortunately, the death toll for them was nil. Alhamdolillah (thank God) the wedding ceremony they were guarding, where half of the ruling class gathered, was solemnised in peace, the food was good, great liquor and there was talk of Russian blondes for special guests.

The blast took place roughly few miles away from the huge farmhouse of the property tycoon, at exactly the same time, when the spectacular fireworks started.

He was busy sorting out the stuff, it was a dirty job but someone had to do it. He concentrated, ignoring the stench and separated the bits carefully. He was aware that there was a small beauty parlour in the basement of the plaza that was blown away, where a bride was getting ready for her big day,

His sharp eyes spotted a delicate ear, with a small golden jhumka.

Her head was spinning. She sat silently and thought about the place she visited earlier, bustling with people. She envied all of them, hated them all with a vengeance; all the couples, kids, happy, carefree teenagers, hanging out with friends. She felt so lonely but then she thought about the young sales person at the pharmacy counter, who asked her for a prescription for the meds she desperately needed.

And then a face appeared in her memory. On her way out, she bumped into a young, blue eyed, bearded boy.

His voice was stern and heavily accented, and his gaze was frighteningly piercing and determined. He was wearing a jacket, which was strange considering the time of the year and weather.

The jacket with five kilograms of Research Department Explosive (RDX) and C4, blew off in the wrong place and at the wrong time. The gateways to hell and heaven were opened simultaneously and many souls passed through.

A young, blue eyed, bearded man got stuck in inferno for eternity.

The religious scholars debated on talk shows whether suicidal attacks are halal or haram. Every side had their own definition of shaheed (martyr) and their own quota of hoors (angels), the usual stuff.

Nobody went to that market to buy death that day but her. She looked in her bag for the pills she bought.

He carefully removed the earring from the lobe and rinsed it. The metal retained its sparkle; lustre of gold was stronger than the staining ability of blood. In the hope of finding the other piece, he looked into the bori (sack) again, and found a small plastic bag containing lethal amount of sleeping tablets. Disappointed, he put everything back in the sack and tied it up before dumping it in the huge waste bin in the courtyard of the ‘sarkari murdakhana’ (government morgue).

Her pills were not in her purse, death played as her stubborn beloved, completely ignoring the pleas of the forever cursed lover and showering attention to those who never wanted or cared for it. She was left alone, on the mercy of luck, to get screwed by life… again!

The price of 10 grams of gold was Rs41,450 and one kilogram of atta (wheat) was sold for Rs48. The finance minister assured that a huge decrease in the exchange rate of dollar against the rupee was expected. The total amount the grieving families received was less than the florist’s charges at the fancy wedding, both paid by the tax money of the third class people of the third world country. Human life, retained its position as the cheapest commodity in Sohni Dharti for that year too.

(Happy be the bounteous realm)

A Doctor by Profession, a writer by passion, a dreamer by design and a rebel by default. She is currently living and working in Lahore and has a blog by the name of "Boldie Talks", (seemisadia.wordpress.com). She tweets @Seemisadia(twitter.com/SeemiSadia) and has a Facebook page as www.facebook.com/boldietalks