We do not deserve people like Aitzaz Hassan and Chaudhry Aslam 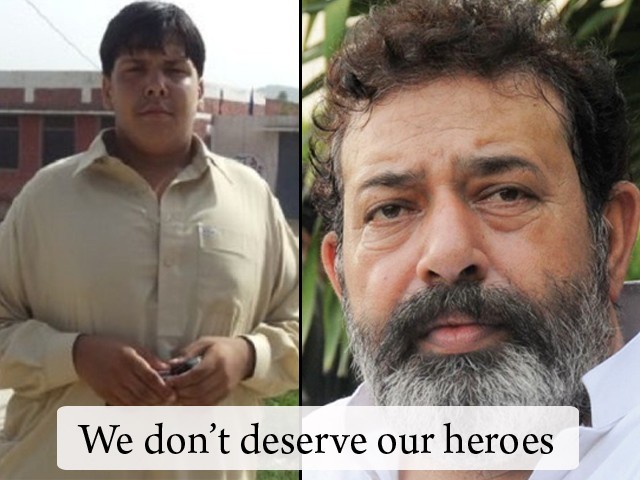 This blog post is perhaps more directed towards the voters and members of the Pakistan Muslim League Nawaz (PML-N), Pakistan Tehreek-e-Insaf (PTI), Jamiat Ulema-e-Islam (JUI) and Jamaat-e-Islami (JI), than to anyone else. It is written for those who do not see banned militant outfits as legitimate threats to Pakistan.

This is for all those people who have been led by their leaders to believe that certain terrorists were previously die-hard patriots. For all those who fail to read between the lines and do not realise how their leaders have, on every occasion, very cleverly manipulated their statements and, in doing so, guided the people towards ignorance.

All those who believe that Shias and Sunnis are both being hunted down in the same manner and fashion. All those who refuse to acknowledge that terrorist organisations are not only engaging in an armed conflict but also polarising the society through their literature, sermons and fatwas (decree).

All those people who believe that drones are the ultimate and the only reason for terrorism in Pakistan and if somehow we shoot one down or stop the USA from sending anymore, then the militants will go back to being the good Samaritans they always were. Their leaders will be seen either submitting their CV’s for government jobs based on ‘educational qualifications’ or perhaps running a small general store selling perishables in Dera Adam Khel. Such ideas only constitute wishful thinking – nothing more.

A little review of the numbers here is necessary.

Drone strikes in Pakistan began in 2004.  In 2003, 140 civilians and 24 security personnel were killed by terrorists.

This is just an introduction as to how irrational the correlation between drone strikes and terrorism is. This is in no way a sign of support for drone strikes but just a plea to not to confuse the two differing issues.

Then 2014 started with a bang. A bang in Hangu and a bang in Karachi, and once again Ali Azmat’s song ‘bomb phatta’ challenges ‘Pak sar zameen’ for the spot of the national anthem.

The blast in Karachi took the life of ace cop Chaudhry Aslam and the responsibility has been accepted by the Tehreek-e-Taliban Pakistan (TTP). However, it is not alleged that they are responsible. They have written a page long letter expressing their happiness and contentment on having killed Chaudhry Aslam.

Representatives of the Pakistan Peoples Party (PPP), the Muttahida Qaumi Movement (MQM) and the PTI all released statements, sending their condolences to Chaudhary Aslam’s family. However, where PPP and MQM, in their statements, held the TTP responsible, PTI deliberately chose to remain silent on who killed Chaudhary Aslam.

My question is, why?

How can our leaders express sincere grief on someone’s demise if they cannot even show sincere condemnation?

How do our leaders claim to respect our heroes if they do not demand action against those who killed them?

How do our leaders promise to solve our problems if they do not even identify them?

That blast in Hangu took the life of one 14-year-old boy Aitzaz Hassan. Aitzaz was standing outside his school with two other friends when the suicide bomber approached. What he did to save his school and the courageous feats with which he sacrificed his life have few parallels. However, what people have failed to realise is the potential graveness of this situation. The school had around 2,000 students inside. The specific area in Hangu, Ibrahimzai, where this school was located, is a Shia majority area. This is not a mere coincidence.

Since it was a school, it is safe to assume that majority of those 2,000 students were under 18 years of age. Had Aitizaz not stopped the bomber at the gates, can we even begin to imagine how many parents would have been first seen trying to identify the bodies of their children in hospitals and then queuing up for their burials?

Perhaps Aitizaz, in that moment when his two friends ran inside on seeing the bomber, realised the gravity of the situation and stood his ground.

Since Hangu is in Khyber-Pakhtunkhwa (K-P), I am very much sure that Aitzaz knew about the PTI. Let us assume that he also knew about PTI’s stance on terrorist organisations i.e. we should negotiate with them.

So in that situation, Aitizaz should have perhaps offered tea to the bomber, asked him to sit down and reason out as to why does he wants to blow up children, based on their belief system. Perhaps after a cup of hot tea and a few cookies later, the bomber would have realised what a grave mistake he was making. And Aitizaz, in turn, would have proved to us what a great success PTI’s policy is.

However, that 14-year-old kid knew what he had to do to save the lives of his classmates. He knew that tea, cookies and a handshake were not going to stop the bomber from blowing himself up. He believed in something more than the nonsense being fed to us by our leaders. I am yet to see a public statement from any party, including the MQM and PPP, which calls for action against the LEJ while praising the sacrifice of Aitzaz Hussain.

Our nation does not deserve sons like Chaudhary Aslam, Major General Niazi and Aitizaz, when we do not have the courage to look in the eyes of their killers and say,

Brave men, either in uniforms of the police, the army or the school, are laying down their lives, not realising that the leaders of this country are making sure that their sacrifice goes in vain.

The 14-year-old Aitizaz had more guts and courage then our elected representatives. He faced danger like a true patriot and knew the real price we have to pay for the freedom to live in peace.

Tweeting and releasing press statements condemning Aitizaz’s death, while not identifying his killers at the same time, is nothing but naked hypocrisy.

I hope our leaders don’t fall any lower in the months to come this year.