Lest we forget: Remembering the victims of the 2013 Hazara massacre 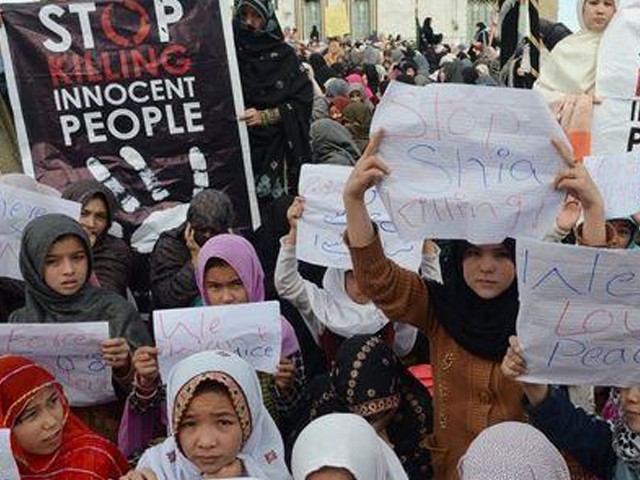 Shia killings are not an alien concept in Pakistan. The attacks on Shias have their fair share of history in the country but the Hazara community seems to be the target of the bloodiest attacks. PHOTO: AFP

When Aslam Raisani, the then chief minister of Balochistan, was asked about the Mastung massacre in September 2011, he replied,

“The population of Balochistan is in millions, 40 dead in Mastung is no big deal.”

When asked about what he would do for the grieving families of the victims, he replied,

“I can send a truckload of tissue papers for them to wipe away their tears.”

Horrific as this may sound, the Mastung massacre was not the bloodiest day in the long history of Shia killings in the Hazara community. That ‘honour’ goes to the massacre on January 10, 2013 in Quetta where over 100 people were killed in three bomb blasts that ripped through the city.

The responsibility of the attack was claimed by a militant organisation. Although religious militants reach levels that can rarely be witnessed elsewhere, it takes something special to incite a terrorist attack that leaves the grieving families in scenes you thought only existed in the most gruesome of horror movies.

After the killings, protesters refused to bury the dead and carried out sit-ins in Quetta for almost an entire week.

Although protests broke out in Karachi, Lahore and other major cities of Pakistan too, none came close to the gut-wrenching scenes witnessed by the Hazara community in Quetta.

Shia killings are not an alien concept in Pakistan. The attacks on Shias have their fair share of history in the country but the Hazara community seems to be the target of the bloodiest attacks. It is said that the persecution of the Hazara people goes back to the time of Babur, the first Mughal Emperor. Babur died in 1530 and unfortunately things have gone from bad to worse for them in these 500 years.

What is alarming is that the slightest notion of calm is followed by an even more brutal storm. Even more alarming is the fact that one-third of the victims are children and none of those responsible for the attacks have been brought to justice so far. All that has transpired was the run-of-the-mill suo motu notice taken by our former Chief Justice Iftikhar Muhammad Chaudhry.

And then our government decided to sack the inept Aslam Raisani from his position as chief minister and replaced him with Zulfiqar Ali Magsi.

But what impact did this have?

On February 16, 2013 the Hazara community was once again targeted in an attack that killed over 80 innocent people.

The question is, what is the solution to all this hatred and killings?

There are those who claim that religion and state must be separated in order to curb religion-based violence in Pakistan. However, this solution is easier said than implemented.

But then how can a region like Balochistan, which is plagued with violence of every kind, rid itself from this cancer?

There are no easy answers to this increasing menace and something that has been around for such a long time will not go away that easily. We can blame the foreign hands all we want and blame opposing spy agencies all we want but the truth is that none of this would have happened had we learned to keep our own house in order.

We never did that and now we must suffer the deadly consequences of the seeds we sowed ourselves.

It was heartening to see the support across the country for the Hazara community during these tough times. But it is even more important that this wave of support and solidarity not be limited to the events in 2013 only.

It must get bigger.

It must gain more momentum.

It must go on till the persecution of the innocent comes to an end.

It must continue till every Pakistani can breathe freely knowing that his religious inclination does not define the choice between life and death.

It must be pursued till our religious and ethnic minorities get the rights they deserve.

It must carry on till every section of our society – large or small – is treated on an equal level without any implicit or explicit prejudices.

It must go on till the antagonists are brought to justice.

It must be pursued till the curse of religious militants and extremism is fully and truly dead.

It must persist till the day when the only identity that each one of us has is ‘Pakistani’ – nothing more, nothing less.