Beware: You may be heading into (murderous) marriage 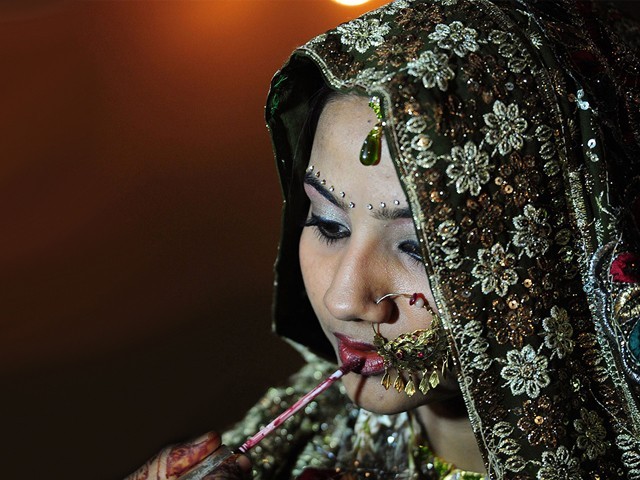 A bride gets final touches from a relative. PHOTO:AFP

Marriage comes with its own set of doubts and insecurities. You might have heard it on the news, you might have seen it happen with someone you know – there are many stories about failed marriages all around us. Stories about how families have been fooled in the name of this sacred bond and have lost their life’s worth of savings.

The increasing statistics about marriages being broken due to infidelity, fraud by the in-laws, husbands being abusive or having prior criminal record, paint a horrible picture of marriages in our country.

The divorce rate has reached an alarming level and this is because marriage is a delicate relationship, which a single lie can cause a crack in. Two in every 10 families are getting fooled by their prospective in-laws and therefore deception and fraud in families has become commonplace.

In Pakistan, 50 per cent of women from the urban areas acknowledge that their husbands beat them up. Unfortunately, many of these women can’t get out of these relationships because they are afraid of the reaction of their families. Getting a divorce or leaving your husband is considered an offence to the ‘honour’ of families in Pakistan, which in some unfortunate cases results in the heinous act of honour killing. According to the statistics provided by The Aurat Foundation, there were at least 1,636 honour killings cases reported in 2012.

How are people deceiving each other in the name of marriage?

Parents, who want to get their children married off, knock on the doors of marriage bureaus and often get shammed. These bureaus and their fleecing has become a common issue in the country. One such case happened in Muzaffargarh, Multan, where a young girl was found to be involved in the scam of marrying 23 grooms. She was part of a gang which was running a fake marriage bureau and their scheme was to get the girl married to well-off men through fake nikkah rituals and have the grooms bear all the wedding expenses. After the wedding, the girl would steal all their jewels and money. However, this girl was caught in one such con and the details came to light.

The quest to find a perfect match for their daughters is every parent’s concern. They look for opportunities to get their daughter married to overseas Pakistanis but quite often, these marriages take unpleasant turns. Such is the story of Aqila, who was married off at the age of 18 to a British Pakistani. After two years, her in-laws allegedly took her to Pakistan and left her outside her parent’s house, without her consent, her passport and her new born baby.

Another similar case is of Saira Rani, a British woman of Kashmir origin, who was murdered allegedly by her husband. The couple had a four-year-old child and were going through many marital problems. The husband went to Pakistan and called her there, claiming he wanted to work things out between them. When Saira reached Pakistan, her husband killed her on their way home to Mirpur and later confessed that he killed his wife to put a final end to their marital problems.

In Pakistan, many parents feel helpless when it comes to protecting their children from such instances. They feel worthless when they witness the physical, verbal, psychological and emotional abuse of their daughters at the hands of their husbands. The repercussion of such persecution is detrimental; sometimes threatening the very life of the wife. For instance, Poonam Bibi in Gujranwala committed suicide because her husband taunted her for not being able to produce a child.

An arranged nuptial is when families choose partners for their children. However, often they do not initiate an interaction between the to-be-wed couple and this makes the girl and the boy feel like they are marrying a stranger. Often, in such compelling situations, where the person in question is not happy with the wedlock arranged,  he/she decides to run away or getting rid of their other half, and end up complicating matters further.

So how you can save yourself from this risk?

Marriage is said to be one of the major events of our lives but have we ever given it a thought as to why this is so? There is a general belief that life changes after marriage but it’s uncertain whether the change will be for the better or for the worse. When you agree to wedlock, you’re agreeing to spend the rest of your life with one person. But how can you do that if you do not know them at all?

Whether you’re tying the knot for love or to just start a family, getting married is not so easy. To find a perfect match, you have to look at attributes like family background, educational qualifications, the personality of the person and much more. But how can they be truly verified?

Amidst deceptions all around us, a successful marriage depends on how you work on your relationship after the nuptials. However, it also depends on how you screen your potential partner. Before uncertainties cloud your mind, do some research and try to find out more about the person you are to get hitched to.

The aforementioned incidents show that it’s better to be vigilant and pre-marital screenings can help reveal hidden truths about your prospective life partner. The screening includes background checks, criminal records, employment records and behaviour checks. These will give you a clearer picture of the person you are to tie the knot with and will help you make one of the most important decisions of your life. Hopefully, the right decision!

A professional blogger and content specialist who works at www.riskdiscovered.com. Through her write-up, she creates awareness about social issues and social risks.