Pervez Musharraf… and the plot thickens 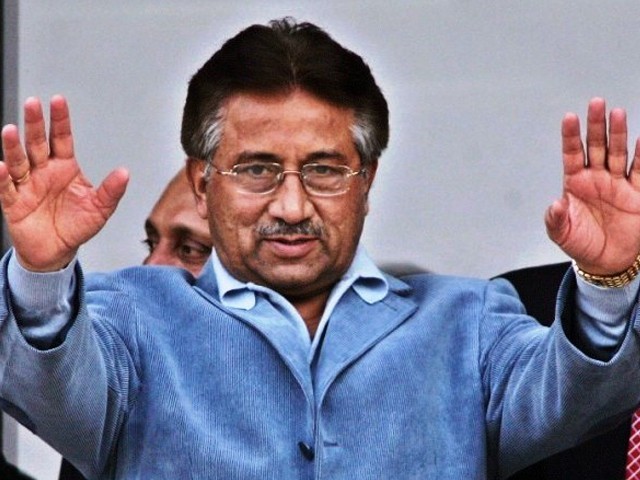 Common sense says that the Musharraf bomb should be dodged, that he should be let off the hook and transported abroad. PHOTO: AFP

The ‘Musharraf saga’ has taken a brand new turn. After failing to appear before the court once, the ex-army chief was on his way to the court again when a sudden ‘heart attack’ diverted the route of his vehicle and all security personnel around him to the Armed Forces Institute of Cardiology (AFIC), instead of the court.

Guilty or not guilty is not the question. The question is – how does making an ex-Army chief and President of Pakistan appearing before the courts benefit Pakistan?

Civil-military relationships in Pakistan have always been scratchy. There has always been a voice inside the head of every democratically elected premier telling him that military intervention – direct or indirect – is just around the corner. But after witnessing a democratically elected government complete it’s term for the first time in our history and military interventions apparently off the radar for at least the near future, why invite something that could potentially derail the wheels of democracy? Surely if we want to beat the drums of democracy, we also need to realise what moves will prolong it and what moves could spark a sudden end to it. The Musharraf episode has all the makings of an explosive situation for Pakistan and unless care is not taken, things could spiral out of control.

Musharraf’s first mistake was probably his decision to return to Pakistan. Although initially, during the military coup in 1999, he had support but his popularity eventually took a nosedive following the emergency of 2007, the removal of Iftikhar Chaudhry, and company, and a crackdown against the media’s freedom – the very freedom that he had given birth to.

His exit from the political scene, and the country itself later, was a sound decision considering his flailing popularity, and frankly, he should have stayed abroad and not made any attempts to come back. But then he formed his own political party and decided to come back to Pakistan under ridiculous disillusions of grandeur and a non-existent support base.

What ensued was to be expected – the All Pakistan Muslim League (APML) (a political party that, unfortunately, has fewer members than a volleyball team) boycotting the elections after Musharraf had been disqualified.

What did Musharraf accomplish from his return to Pakistan?

Other than a very expensive security bill, nothing.

His return has triggered a situation that has not only put the country’s powerful military in an awkward situation, he has put himself in hot water. Commando or not, this is not courage.

There are those who claim that there was a backdoor agreement between the military and the government where Musharraf would eventually be sent abroad after a lot of huff-and-puff. While that sounds very likely, what they did not take into account was the possibility of the judiciary thwarting their plans. Ex-Chief Justice Ifitkhar Chaudhry may have retired, but he still calls the shots at some level. And it may be possible that he is directing the current judiciary to charge Musharraf at all costs and ensure that he is not let off.

How do things go from here?

Musharraf will most likely be let off the hook. Quite possibly there will be an intervention from the Gulf, a deal will be struck and Musharraf will go abroad, never to return again.

Of course, the judiciary may stop this from happening since it is more powerful than it has ever been before in our history. And if the judiciary stands firm, all hell will break loose. The military, despite staying aloof from politics off late, will never want a former chief of its powerful institution to face the humiliation of being charged in court.

Musharraf made errors, but care must be taken as to how he is dealt with. Pakistan is already going through tumultuous times with an ailing economy. The last thing the country needs is a former army chief being charged in court, which will derail the country’s progress in manners worse than the last time an ex- head of state was charged in Pakistan under the Zia regime.

Common sense states that the Musharraf bomb be dodged, and he be let off the hook, and transported abroad. Things progress into the future and Musharraf remains a part of history never to be spoken of again with the current fire of derailment cooled off.

But like the say however, common sense is not that common.