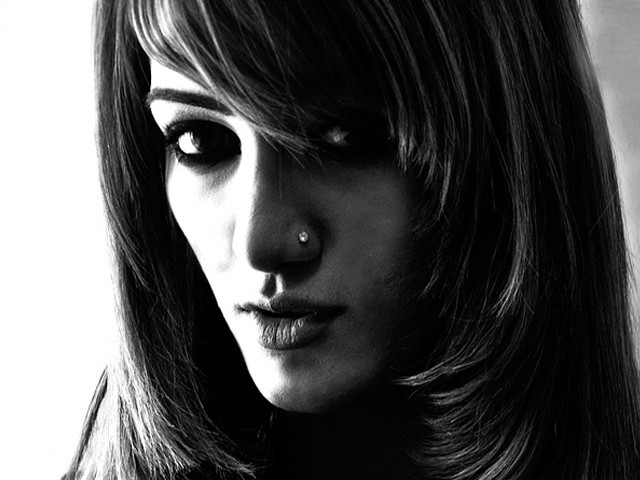 If you think about it, it is not Mathira who is raunchy and obscene. It is the majority of our population that is perverted and mentally sick. PHOTO: FILE

Mathira is a young and talented icon of Pakistan and I do not understand why the people of this country love to hate her. Last year the uproar was on her modelling in the Josh condom advertisement and the latest ruckus is over her latest song Jhootha.

I really do not think that there is any need to get so worked up over Jhootha. In fact, even the critics found nothing wrong with the song except perhaps, the age of Arbaz Khan. The audience has even gone so far as to comment that Arbaz is yet to reach puberty but little do they know that the onset of puberty occurs at the age of 12. There have even been negative remarks about his height and weight which is frankly just uncalled for.

In July 2013, Mathira appeared in a condom advert which in my opinion was a public service message to encourage the use of condoms in a country struggling with population control. But how did our society react? They conveniently and quite expectedly, labelled the ad and her as ‘vulgar’.

Take a moment and think about it.

Pakistan – quite literally a ticking time bomb when it comes to our explosive population growth rates – is in dire need of family planning. And that is exactly what condoms do. They offer a family planning solution which is less expensive and is considered to have fewer side effects in comparison to alternatives like birth control pills and intrauterine devices (IUDs). In addition, condoms offer ‘safe sex’ against sexually transmitted diseases (STDs) and other major diseases including Hepatitis B and C as well as HIV/AIDS.

So, the way I see it, Mathira brought the issue out in the open, tried to create awareness in the population and offered a solution through the advertisement. But what did this blind nation do in return? They called her vulgar.

I remember when Mathira used to host a late-night programme on Vibe TV called Love Indicator. She once received a live call from a man who made some negative comment about her dressing and her body. Instead of getting flustered or cutting the call short, she boldly told the caller said that he needed to go home to his wife. She pointed out that live shows were not the place to solve his problems.

So, again I ask you, who is vulgar – the caller for unnecessarily passing lewd remarks or Mathira for putting him in his place and indicating to others that neither she nor other women should be treated with such disrespect?

Coming to the video, I would argue that we don’t seem to have a problem looking at a video of semi-clad women from the West dancing about young boys like Justin Beiber. Apparently in that case there seems to be nothing wrong and that doesn’t ‘directly’ affect our culture, but when it’s our own women, we will leave no stone unturned to make sure she is derided. Both were run on television were they not? The audience is still the same, is it not? Then why this hypocrisy?

The video was directed by Arbaz Khan’s brother, which in effect shows that he did in fact have a guardian looking over him throughout the making of this video. If his parents and older siblings seem to have no problem with the content of the video, who are we to make a judgment call?

Unfortunately, throughout her career to date, people have questioned her morals and ethics. However, I think that she is doing a service to society by fighting against taboos and stigmas all on her own. In the face of such harsh criticism, she has taken it upon herself to tackle taboo subjects such as sexuality, love, family planning, HIV/Aids and educate the masses about them so that they refrain from learning the wrong things from the wrong sources such as the internet and pornography sites.

What adds to the hypocrisy is that it is mostly the male members of our society who view inappropriate content on the internet and it is these very males, most of the time, who then miss no chance to mock and insult people like Mathira who are actually trying to make a difference in society. It is quite obvious that chauvinistic males are threatened by the likes of Mathira and the work that she is doing for society.

I fail to understand how it is okay for the people of this country to watch pornography and inappropriate content but try to educate them about sex – health, safety and precautions – and they term the person ‘immoral’ and ‘obscene’. This narrow-minded nation has a panacea in Mathira, if only they would open their eyes.

Hats off to you Mathira, you are truly Pakistan’s superwoman and we, the mentally sound, will keep on supporting you in your cause.

Aids is a real disease, get out of your 'conservative' bubble and believe it!

Veena Malik and her never-ending 'dramas'