Indian elections 2014: It’s Kejriwal versus Modi, and I know who the winner is 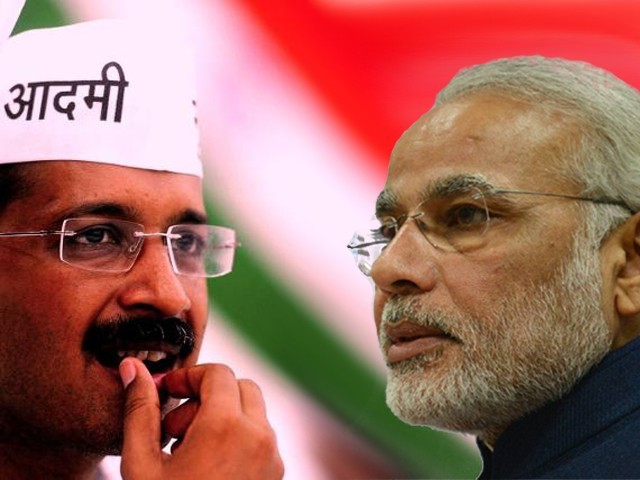 The biggest victim of the Indo-Pak conflict has been the aam aadmi or the common man.

The biggest victim of the Indo-Pak conflict has been the aam aadmi or the common man. In fact, he is considered nothing more than just a chess pawn by the ruling class on both sides, to be played off against the ‘enemies’. His life is cheap and can be sacrificed. His blood is of no worth and can be shed like water.

Thousands of innocent lives have been lost in this mindless conflict since independence and yet, the insatiable craving for blood by these beasts of prey, on both sides, remains far from being gratified.

First came the white man and divided us in the name of religion. A line was drawn – this is India, that is Pakistan, we were told.

Our ‘great’ leaders fell into his trap and in the process ended up sacrificing millions of innocent lives and sowing the seeds of hatred in our hearts. It was the common man who died in the cataclysmic partition and was rendered homeless.

Then, the white man pitted us against each other and sold his extortionate weapons to our poor countries so that he could make more profits, even as the wretched aam aadmi continued to live a miserable life. The same divide and rule policy is continuing even today. Whenever any bomb blast takes place on the streets of Karachi and Mumbai, it is the common man who dies.

Alas, nobody cares a fig about him.

But, the aam aadmi has risen and taken the broom in his hand to bring a change. He has understood the game that is being played with him. Henceforth, he will not let himself be divided in the name of religion, caste, language and creed and be used as a chess pawn.

We have been brothers and we will always remain brothers.

The aam aadmi will unite the hearts, which have been torn apart, and he will make peace because he has no hatred in his bosom. His only religion is humanity. All he wants is to live a life of dignity and security. He is against terrorism and at the same time has no appetite for fighting mindless wars, for he will be the biggest loser in such a scenario. Trust me; the jingoists on both sides calling for war today will flee the country in the twinkling of an eye when it actually takes place.

‘Live and let live’- that’s the philosophy of the aam aadmi.

Delhi’s youngest chief minister, Arvind Kejriwal, is a terrible singer. Yet, when on Saturday he sang in his unmelodious voice this forgotten song of Manna Dey, at his oath taking ceremony in Ramlila Maidan, he somehow managed to move a billion hearts.

By the time he finished his impassioned speech, people at the venue were seen wiping away tears from their eyes.

As Kejriwal was singing this song, I looked up in the sky even as a large tear trickled down my cheek. For a moment it seemed as though Mahatma Gandhi would, at any time, peep through the blanket of clouds on this cold morning and cry,

“Hold hold! Let me join you my children!”

Indeed, Gandhi would have loved to be here on this historic occasion to bestow blessings upon his children who have finally, after groping about for truth in the darkness for 66 years, found the path of brotherhood, non-violence and honesty.

In fact the Aam Aadmi Party (AAP) is the best thing that has happened to India since 1947.

The rise of the AAP shows that the people of India have not forgotten Gandhi’s values and his message of brotherhood, and that he is still alive in our hearts. It makes us feel good about ourselves. If there’s any political party that will truly walk on the path shown by Gandhi and extricate us from the chasm of darkness, it is the AAP, for its foundation is laid on the values of the great soul.

After its stunning debut in Delhi, now the AAP has its eyes firmly fixated on the 2014 general elections. It is not going to be an easy task for the fledgling party. However, the victory in the national capital has come as a shot in the arm for the AAP and has energised its cadres.

AAP’s main focus in the upcoming elections is going to be on states in northern and central India such as Madhya Pradesh, Uttar Pradesh, Delhi, Gujarat, Bihar, Haryana, Jharkhand, Chhatisgarh, and Rajasthan. These states constitute around 250 seats out of a total of 545 in the Lok Sabha (Indian parliament). Political pundits are predicting that the AAP might emerge as the third largest party post-elections and form a third front government if the Bharatiya Janata Party (BJP) fails to get enough numbers.

Leaders like Odisha’s chief minister and Biju Janta Dal’s president, Naveen Patnaik, have been making a strong pitch for the formation of the Third Front to fight the “corrupt” Congress and “communal” BJP.

“There is a need for a stable, transparent and secular government at the centre that can fulfil the aspirations of the people of our country. Neither Congress nor BJP is in a position to provide such a government,” says Patnaik.

Nonetheless, even if the AAP is able to make a difference of 20 to 25 seats in the final tally of the BJP, it could seriously harm Hindu nationalist leader Narendra Modi’s chances of becoming the prime minister.

The number required to form a government at the centre is 272 and if the saffron party falls short of 180 seats, Modi will find it difficult to get enough support from other parties by virtue of his ‘tainted’ past. For instance, the Janta Dal (United) led by Bihar Chief Minister Nitish Kumar, which was until a few months ago in an alliance with the BJP, decided to have no truck with the saffron party after it anointed Modi as its PM designate in June this year.

The biggest challenge before the AAP, however, would be to connect to as many people as they can in the next four months through their door-to-door campaigning, which proved to be extremely successful in Delhi. The more they are able to reach out to the people, the more impact they will make on the national scene.

The Congress, on the other hand, is down and out of the game. It is also the beginning of the end for the Nehru-Gandhi dynasty.

It is going to be Kejriwal versus Modi in 2014.

For me though, the former has already won the battle. He is a good human being and this is one quality which is conspicuous by its absence in our leaders today.

And when it comes to Indo-Pak ties, AAP’s biggest plus point is that, unlike the BJP and the Congress, it carries no historical baggage. It is a party which can write a new chapter in the Indo-Pak relationship and make a fresh beginning.

This is a good omen, indeed.