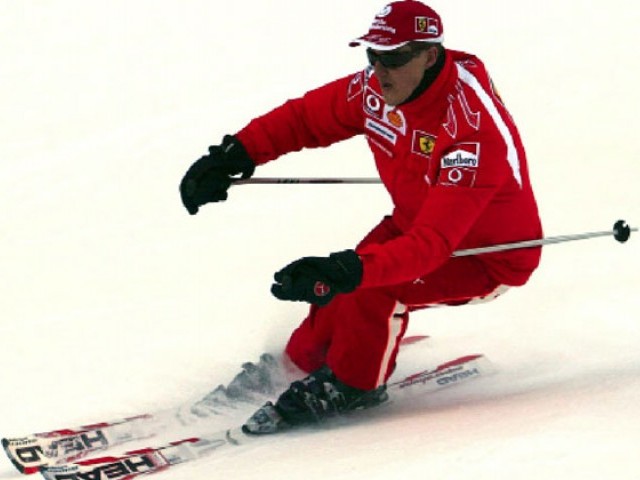 I write this piece with a heavy heart as my idol and one of sports’ biggest icons Michael Schumacher is fighting for his life at a French Hospital.

Seeing the ultimate racing driver, someone who is known never to back down on the race track, in a fight for his life has indeed sent shockwaves across the world.

Indian sand artist Sudarshan Pattnaik works on a sand sculpture of seven-times Formula One world champion Michael Schumacher to wish him a speedy recovery at Puri in the eastern Indian state of Odisha. Photo: Reuters

Schumacher injured his head during a skiing accident at the French Alps a couple of days ago and subsequently went into coma due to the severity of the injury. The whole sporting community, not just Formula One, is in a state of shock since the news broke and the overwhelming support and best wishes from millions of fans across the world speaks volumes about how this man has touched the lives of countless people.

His injury has been on the top of news bulletins and daily tabloids across Europe with support and prayers coming from all corners of the globe through social media primarily. His condition remains extremely critical as on average only 20% to 25% of people recover from such a grave situation, but then again, Shumacher is no ordinary mortal.

Fans fix a Ferrari flag in the ground in front of the CHU Nord hospital emergency unit in Grenoble, French Alps, where retired seven-times Formula One world champion Michael Schumacher is hospitalized after a ski accident. Photo: Reuters

For all those who know him well, and his indomitable fighting spirit, believe that there is sincere hope that he’ll pull through the biggest fight for his life against all odds (God willing).

If I ever wanted someone to race for my life or even fight for my life, it would definitely be Schumi and many people would endorse this viewpoint. I have been his diehard fan since 1993 when he began his first full season as an F1 driver for the Benetton team. Such was the adrenaline rush and sheer inspiration I used to draw from his brand of racing.

I have been collecting his memorabilia for over two decades now and have little reason to doubt being his biggest fan in Pakistan. During his Ferrari days, I used to hang a huge five by three feet Ferrari F1 flag on the back of my car. My room used to be decorated with his flags, posters and other merchandise including caps, jackets, mugs and lots more.

Schumacher’s highly illustrious stint at Ferrari and Formula One will go down in sporting history as one of the greatest success stories of all time. In its heyday, it was compared with the sheer dominance of the Chicago Bulls under Michael Jordan and how Tiger Woods took the golfing world by storm.

Schumacher is not just a legend in the world of Formula One; he was a global brand during his 11 year association with Ferrari and in the end with Mercedes.

His legacy in F1 and Ferrari in particular is not just about his record breaking achievements, where he virtually obliterated each and every benchmark that ever existed in the pinnacle of motorsport. Try walking across the streets of many Asian countries and ask a random question as to what people know about F1 and in a huge majority of the cases the people will relate it to Schumacher and Ferrari.

In many ways we should credit him for generating such interest in motor racing, which was never witnessed in Pakistan before.  There is incredible motor racing talent in Pakistan, however almost all of it has been channelized towards street or drag racing primarily due to a sheer lack of race circuits and also because of the incredible fame of the Fast and the Furious movie series.

Formula One’s mass appeal across the globe owes a lot to the high stature and charisma exhibited by Schumacher and the additions of so many new tracks across Asia and other countries on the F1 calendar were only made possible by the Schumacher brand.

Schumacher epitomises racing with his fearless determination and, ruthlessly efficient and mercurial driving ability. His ardent fans can never ever forget his imperious drives with such fierce intensity as if every lap were the last of his life. He might have been mired in controversy on quite a few occasions and crossed the line a few times but to his loyalists it was an innate feature built in his system to simply go to the edge and beyond.

As highlighted by David Coulthard, former Mclaren F1 driver, in his recent article, Schumi’s injury has perhaps highlighted, in certain ways, how he was at times not given enough credit for his incredible achievements on and off the track.

Coulthard goes on to say that Schumi took F1 to such a level where it became customary for all sorts of critics and people to find excuses or flaws to question his unparalleled success on the grid. Michael was the benchmark or yardstick for success for all the drivers out there even though they might have hated to admit it during that time.

Taking Coulthard’s point forward, Schumi’s unexpected fall has also brought to the fore once again the fact that at the end of the day, he is human and not invincible. He is a family man in every sense of the word with a loving wife, Corinna and two young children, Gina Maria and Mick. His human side and charity work has been exemplary to say the least. A long time ambassador for United Nations Educational, Scientific and Cultural Organisation (UNESCO), he once said in an interview,

“I really want to help the ones people don’t know about. Nowadays, certain projects attract lots of donors. Then there are others you never hear about. Those are the ones I’m interested in.”

He also once told F1 magazine that,

“It’s great if you can use your fame and the power your fame gives you to draw attention to things that really matter.”

Michael Schumacher’s wife Corinna and their children are reportedly at his bedside as he fights for life. Photo: Reuters

When his bodyguard was killed along with his two sons in the Tsunami in 2004, Schumi donated 10 million dollars for the rescue and reconstruction efforts, which was a lot more than the donations received from quite a few countries and leading global organisations.

Details of the incident revealed today have clarified that he seriously injured himself while skiing in deep snow to try and help some friends stuck there even though that area is marked as dangerous and off limits due to hidden rocks covered by deep snow.

My thoughts and prayers are with him and his family during this incredibly difficult phase. We all need to keep the prayers and best wishes coming; Schumi is trying to stage the biggest comeback of his life (God Willing).

“I would like to be remembered as fighter who never backed down.” (Schumacher)

Photo of Mercedes Formula One driver Schumacher of Germany celebrating being the fastest in qualifying at the Monaco F1 Grand Prix. Photo: Reuters

Hang in there Schumi and stay strong like you always have, your race is not over just yet…

A professional banker, keen sportsman and occasional blogger. An F1 fanatic and plays all kinds of sports including Golf, Tennis, Cricket etc. He tweets: @saadbari_

The end of Jeremy Clarkson marks the end of Top Gear

Formula 1: Is Red Bull the only contender?