Mathira and her 12-year-old ‘jhoota’ Arbaz – does it get any weirder? 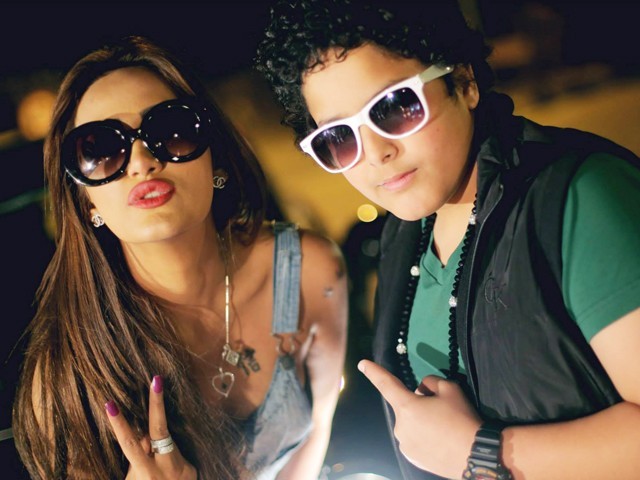 Arbaaz wasn’t really tall enough to reach Mathira’s eyes, but the view he settled upon had many seething in envy. PHOTO: MATHIRA FACEBOOK PAGE http://www.facebook.com/MathiraWorld

I spent much of the last week of 2013 writing a review about the fantastic year Pakistani music had just had. On the first day of 2014, I woke up to the video of Arbaz Khan and Mathira’s song, Jhoota.

My life will never be the same again.

To start off with, I was a bit disappointed that Arbaz was not Salman Khan’s brother/Malaika Arora’s husband, a fact which said more about how irrelevant my references were and less about the situation. In fact, when Malaika Arora was actually worth knowing about (MTV Loveline, circa 2000) this particular Arbaz was still a zygote.

To put that in plain English, a video which is already one of the raunchiest you will see this year, involves Mathira cavorting provocatively with a 12-year-old child who can rap.

The video’s most offensive aspect is the scandalous amount of auto-tune on Mathira’s voice, which makes it difficult to focus on the lyrics. Once you do, you enter a world so bizarre that all the hipsters in the world couldn’t muster enough irony to mock it.

You see, Arbaz spits out rhymes about how he’s going to make Mathira ‘his honey’ while she expresses doubts about his honesty. The fact that Arbaz has yet to hit puberty makes this video feel like a particularly zealous student trying to gain admission to a tuition centre where the teacher pouts a lot. Jhoota is also a fitting riposte to last year’s viral sensation Taher Shah, who had preached a life based on Eye to Eye. Arbaz wasn’t really tall enough to reach Mathira’s eyes, but the view he settled upon has many seething in envy.

In my mind, both the video as well as its content make this the ideal candidate for the Pakistani version of Rickrolling. Here are some examples.

The internet’s initial reaction was to blame Mathira and do the usual Pakistani thang of ogling at a woman while condemning her to the eternal hell fire. However, some voices pointed out that surely the responsibility to discipline and protect Arbaz belonged with the parents.

Well, in a plot twist so bizarre that it would make even the messed-up parents on the Jerry Springer Show say “N***a Whaa?” the video was directed by none other than Arbaz’s own brother.

The Khan household must have some off-the-hook family videos, it would seem.

Most of the best tweets on the matter are not really printable on ET’s page, but here are some of the most safe-to-see reactions.

Political options for the duo:

Okay I have the solution. I say @IamMathira should be prime minister

Trying to make sense of what one just saw:

I believe that the new Mathira video is a direct result of the government ban on aerial firing.

Just watched Mathira's video. Difficult to decide whether to categorize that shambolic effort as a cougar romance or child molestation.

I think "Jhootha" is Mathira mispronouncing "Chhota". Nothing else is making sense.

Nothing wrong with Mathira's new song. Overreactions uncalled for. Kudos to her for being only Pakistani not conforming to imagined values.

Arbaz's and Mathira's music video should've been about Mathira dropping Arbaz off at school, telling him to not take candies from strangers.

I can't believe nobody responded to Arbaz Khan with "beta, apki ammi ki umar ki hai woh," when he asked about Mathira starring in his video.

The prediction and the result:

The uproar on social media over Mathira's video http://t.co/mz8AwOhTUR is precisely what she wants

Post-script: I did manage to hear another, rather lovely song later in the day where we had another far-too-young-Romeo chasing after an older woman. This time around, the video was cute and the only body parts the boy stuck his face in were another man’s arm pit, so no one seemed to mind.

Do check out the song though – Jimmy Khan & the Big Ears with Nadiya – just for fun!