14 myths about New Year’s Eve that you would not believe! 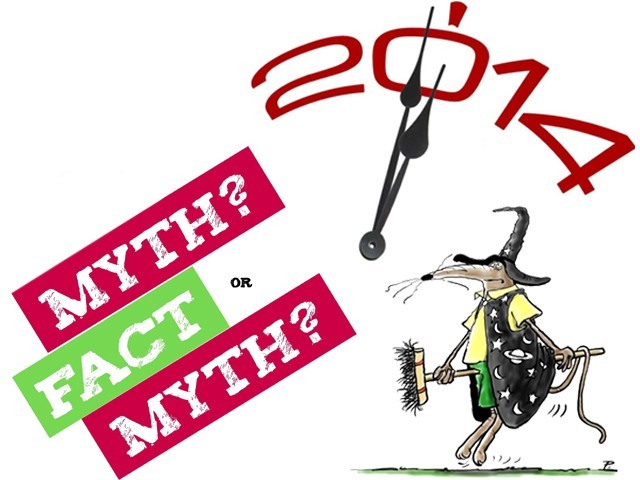 Many people actually make an effort and eat lots of smoked sausages with boiled cabbage on the first day of the year to remain healthy for the entire year. So, eat heartily (and healthy) tonight for good health all the year through!

Although many of us do not admit to it, we do believe or follow some superstition at one time or another. We may cross our fingers for good luck, wear a lucky ‘dress or shoes’, get married on a rainy day for a long and happy marriage or even stop a dog from howling to prevent death.

Some people grow certain plants in their homes or keep a money plant for financial success, while others avoid resting under a peepal tree for fear of ghosts and witches. And then, there are the mysterious superstitions about the full moon or the new moon and black cats.

New Year’s Eve also has its fair share of strange myths and weird superstitions that are followed by many around the world. On the eve of the new year, people sometimes carry out propitious work in order to attract lady-luck while holding back tribulations and antagonism in an effort to make sure that the coming year will be wealthy, thriving and prosperous.

This is because people believe that whatever they do on December 31 and on January 1 will be like a prediction for the year ahead. And this is why people often end up talking about their strange beliefs and superstitions around the time of the New Year.

As 2013 draws to a close, I could not help but think of some of the strange yet, interesting age-old superstitions that have become associated with the New Year over time. Some of these which i have heard, are given below:

1. No sweeping on New Year’s day

Some people staunchly believe that one should not do any cleaning or dusting in the house on New Year’s Eve. They say that it is an ominous act and can sweep away the good luck of the entire family.

Well, why not? Anything that keeps you from the nasty chore of cleaning is welcome, right?

Others ensure that they wear new clothes on New Year’s Eve since they believe that it ensures a constant supply of new clothes for the whole year to jazz up the wardrobe.

Again, I see no harm in wanting new clothes, do you?

There are people who insist that one should take care to avoid wearing a dress with empty pockets on New Year’s Eve since it may be a sign of very low or no income in the year to come.

So, make sure you have some cash in your pockets tonight, even if it is a few hundred bucks. Some money is better than none, as far as I know.

Many people actually make an effort and eat lots of smoked sausages with boiled cabbage on the first day of the year to remain healthy for the entire year.

So, eat heartily (and healthy) tonight for good health all the year through!

5. Say no to chicken

Another interesting superstition I heard was that if you cook any chicken dish on New Year’s day, you will have monetary troubles for the rest of the year.

So now you know who is responsible for all your financial troubles this year…the chicken. Beware!

They say that if you do your laundry, you will certainly wash off your luck or will face a year of hard work. Even more ominous, doing laundry on this day is also associated with facing a family member’s death.

What can I say now? These myths sound more and more like fun to me!

I have even heard some say that eating green, leafy vegetables such as cabbage, collard greens, mint, mustard greens, kale, spinach or coriander leaves is likely to bring wealth for the entire year. There are even those who suggest that eating only cornbread brings instant cash.

Hmmm, green leafy vegetables? Sounds like a ‘mom’ came up with this one!

They say that if you hear a cat crying, you should run in the opposite direction because it brings a bad omen.

I say you should do that New Year’s Eve or not, because it is the most horrifying sound in the world.

The wise men (and women) say that one should not be miserable on this day and neither should one cry because that depression will follow you in the year to come.

So, wipe away those tears and be happy! After all, it is a new beginning.

10. No precious stuff should leave the home

I have even heard people say that you should not give your cash, ornaments, precious items or other valuable things to anyone on the first day of the year because it may be a sign that wealth will be flowing out in the entire year.

So, hang on to your cash until day after tomorrow. Otherwise, do not come running to me…I warned you.

11. Make noise and hang a lemon

Have you ever wondered why there are fireworks on New Year’s Eve? Or why the bells are rung so loudly? It is to scare away the evil spirits and evil thoughts. Even hanging a lemon in the doorway helps in warding off bad spirits.

The way I see it, this just gives you permission to party hard (and loud) tonight!

12. First visitor in the house

People even predict marriage outcomes on the last day of the year. They say that the first visitor to enter the house on the first of January signifies the balance of marriage in the next 365 days. If a man enters your door then the husband will have more authority for the whole year and if a woman enters, then the wife will have complete control.

So, now you know exactly whom to invite over for breakfast tomorrow (and who to not).

Another myth is that you should not break or smash anything on this day otherwise you will have a painful year ahead. Breaking mirror or glass ware is a dreadful omen and it reveals that ‘wreck’ will be your buddy throughout the year.

So, if you are a ‘butter-fingers’ or get angry easily, I would suggest stay away from glass and mirrors.

If you want to guarantee a successful career, then do some kind of hard work on December 31 and January 1.

I personally think this is just to ensure that we don’t party too much tonight.

Now you know some of the myths associated with the New Year. So go ahead, party hard, make some noise, eat well and have a very Happy New Year!