An old Christian lady and a suicide bomber… 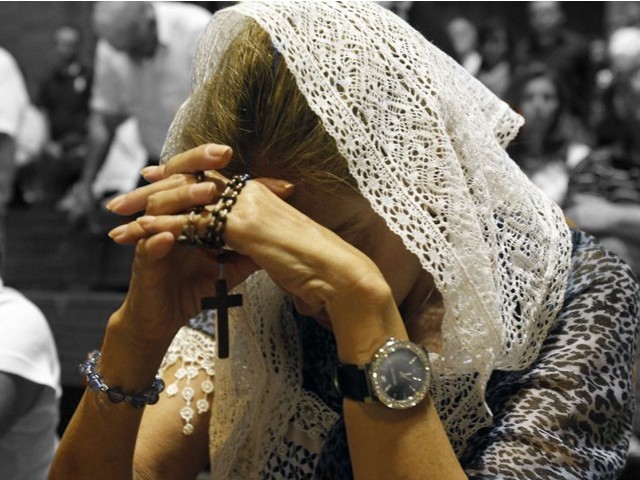 She was an old lady, probably in her early 70s with a wrinkled face, frail, bony arms, a little bent in the back, perhaps suffering from arthritis or osteoporosis. PHOTO: AFP

“You have to make sure you press this little red button twice near your left pocket, not more than three feet away from the target. You know how much three feet is, don’t you?”

This last point of the instructions came out of the so-called engineer’s mouth for the fourth time, along with bad breath and an unpleasant smell that emanated from his clothes which had specks of gun powder in several places.

The boys didn’t know his real name but his reputation as ‘engineer’ was rock solid among the other members of the secret cell. No one ever questioned the logic of calling a ‘bomb maker’ an ‘engineer’. To them, he was the man with a skill that would send hundreds of ‘infidels’ to their graves and to the ‘fires of hell’.

“I know very well how much three feet is. Here… see!”

With this, Shahid turned and spat on one of the boys sitting on the floor in the second row among the group of young men who were quietly listening to the engineer giving his last instructions to Shahid.

The hot liquid fell on the boy’s hair, jolting him out of his reverie. Others started laughing wildly as if it was the most innovative way of showing distance. The boy, angry and embarrassed for a few seconds, yelled the usual abuses at Shahid but soon he too joined the group of other boys laughing at the joke.

After all, no one could be angry with Shahid now. Not for long anyway since it was Shahid who had been chosen by the ‘holy leader’ of the group for martyrdom. He had been told that the keys to his own ‘palace’ in paradise awaited him along with gorgeous hoors of course.

With a smile the engineer said,

“Yes, that’s three feet. May Allah be with you.”

The room echoed with chants of “Allah-o-Akbar”.

Shahid walked out of that shanty house, his head held high and a smile on his face which looked much older and more mature than most 17-year-olds out there on the streets. However, his smile faded the minute he was alone, replaced by an ever-growing fear of the unknown, mixed with grief for reasons not yet known to his young mind.

His destination was Fatima Maseeh Town – a small, run-down area that was home to several thousand Christians and people of other ‘minorities’. This area would have remained in the shadows, hidden beneath the thick dust of poverty, if the pastor of this town had not become popular on television, speaking week after week, about the ‘common aspects’ of Islam, Christianity and other religions.

His message was nothing short of ‘blasphemous’ since he called for equal rights for people of every caste, creed, religion or belief, based purely on ‘merit’ – in terms of jobs, college admissions as well as positions of power. It was made clear to Shahid that people such as this pastor should be silenced quickly before they ‘contaminated’ the minds of ‘true believers’ with their ‘devilish schemes and ideas of equality’.

He knew it was a little too early to be there since the mass would start after a couple of hours but he did not want to take any chances. It was better to sit in the chai dhaba in front of the church and enter the premises early so he could be much closer to the pastor.

He thought to himself,

His hand reached for his neck, searching for his taaweez. That’s what he would always reach for sub-consciously, in times of restlessness or anxiety. But he realised that the group leader had removed it from his neck this morning along with any and every sign that could identify him (or his remains) later.

“Damn it… some life this was! Live as a nameless face and die nameless too.”

He hoped the boys back in that dirty little house would hold special prayers for him that evening and that he would have a new suffix attached to his name – Shahid Shaheed. This brought a smile to his face.

While he was crossing the street, deep in thought, oblivious to everything around him, someone pushed him rudely to one side and in a split second he saw a car whizzing past in the same spot. His first reaction was to keep himself from falling since he knew that might explode his body into tiny little pieces, killing several fruit and vegetable vendors on the street along with him. He thought,

“That will not qualify as martyrdom.”

Before he could comprehend what had happened, he found himself being yelled at by a woman,

(You walk as if you are blind! That car nearly killed you… All my fruit fell trying to save you!)

She was an old lady, probably in her early 70s with a wrinkled face, frail, bony arms, a little bent in the back, perhaps suffering from arthritis or osteoporosis. Her clothes, which might have been black once upon a time, had faded to a dark grey from being washed repeatedly.

His mind was sub-consciously registering all these little details, like an animal driven by instinct, gauging the potential threat. He picked up a few items from the sidewalk saying,

The woman’s face was pale, with beads of sweat on her brow and it was evident that all this unexpected and sudden effort of saving someone’s life (who was going to willingly lose it very soon) had exhausted her physically. Shahid saw a metal locket around her neck with the cross sign that Christians wore. Her hands were shaking and for one brief moment Shahid felt that she was going to faint. She said affectionately,

(Son, you should be careful on the streets. If something had happened to you, your mother would have grieved forever.)

(I live close by. Please help me carry these bags up the stairs, son.)

This new situation wasn’t very pleasant for Shahid. The last thing he wanted was to lose his focus trying to help an old woman with her groceries. But the voice of his old self, the innocent and mild mannered Shahid who used to go to school holding his mother’s hand, whispered in his ears,

“This woman saved your life, however briefly, and probably several other lives too.”

He took the heavy bags from her and heard himself say,

“Yes khala, I will pick these for you. Let me hold this…”

It was a small, dingy flat with very little passage for air. A hand-painted Virgin Mary statue stood on a broken side-table in one corner. He noticed an antique clock on the dark green – almost brownish – walls that had large cracks. The curtains were tattered with a few patches and a low-hanging, naked light bulb was in the centre of the room. The setting was a strange mix of dignity in poverty; a light of faith amidst the darkness of despair.

He also noticed a constant humming sound from inside. He was still trying to find the source of this sound when the old woman called out from inside,

(Come inside son, I will bring some tea for you.)

Shahid walked inside the adjoining room and was surprised to see seven or eight small children, all between the ages of eight and fifteen, wearing prayer caps and reciting the Quran. He thought to himself,

“So, it was the sound of children’s recitation of the Quran.”

In the corner of this slightly larger room, there was incense burning right under a picture of the Holy Kaaba. The children gave him a passing glance and resumed their recitation.

(Aunty, aren’t you Christian? What about that picture outside?)

For that one moment he completely forgot the irritating jacket and the wires strapped to his body.

Over the next few minutes, the woman told him that she was indeed a Christian. But her husband, her soul mate for almost 40 years, who had died a few years ago, had been a devout Muslim. She told him that on his death anniversary every year she would make sure that she invited children from a nearby mosque to read the Holy Quran while she treated them to pudding and desserts, hoping that her husband would be smiling at them from the heavens. She said,

“We lived together for 40 years and not even for a day did we feel any obstacle or problem due to our religions. We both understood that love is what makes us human and every religion wants to make us better people.”

(I have nothing to give back to these children. Whatever little I can manage, I give to them. In return, these little angels pray for my husband.)

Shahid walked out in a daze, after a few minutes. His mind kept going over the images in his head – the two rooms of her house in perfect harmony even in poverty and destitution. And the strong faith the frail, old lady had in humanity and goodness, regardless of religions.

This image was soon replaced by another image, one in which he saw himself pressing the little red button in a church next to the pastor. But even in this vision, he kept seeing small children wearing their white namaz caps, reciting the Holy Quran in the front row and the old Christian woman burning incense under the picture of the Kaaba.

He kept walking… away from the angels and statues… to the same house where the engineer must be sitting with his wires and gun powder. He said to himself,

“I will press it twice if I have to but not on innocent people… and trust me, I know how much three feet is!”

And far away, at that very moment, an old Christian woman was serving pudding to small Muslim children, looking at them with love that is above all religious differences.

The author wishes to remain anonymous.