In Islamabad: “You can’t eat here because you are Pakistani” 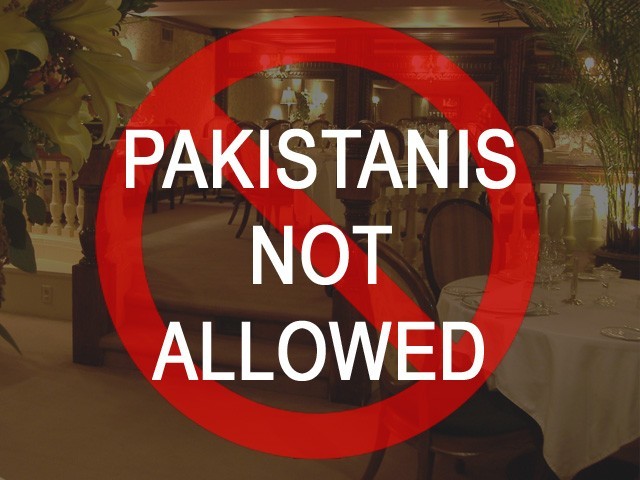 The french restaurant 'La Maison' in Islamabad doesn't allow Pakistanis until they have dual nationalities.

I didn’t hear about journalist Cyril Almeida’s investigation and subsequent tweets against the restaurant ‘La Maison’ through the news or any blogs he might have written. I heard about it from my friends on Facebook, people who are otherwise active in liberal circles and rightfully vocal against the many injustices of Pakistani society.

But the injustice that they were complaining about was Almeida’s outrage that a restaurant in Islamabad bans Pakistanis unless they hold a dual nationality.

They were complaining about his actions, not the restaurant’s policies.

Extremely upset. Heard a rumour of a new restaurant in F-7 that only accepts reservations if you have a foreign passport. NoToApartheid.

Their complaints varied from ‘why the fuss?’ to ‘why the hue and cry about racism?’ After all, aren’t Pakistanis themselves one of the most racist lot on this planet? And if you can’t go to that place due to the misfortune of just being a Pakistani in Pakistan, then go somewhere else.

Perhaps you’re just envious or perhaps you just really want some attention from those white people to feel good about yourself.

Yes, that definitely must be it.

La Maison, Marvi Road, F-7/1. Refused to give me a reservation as a Pakistani. Vague references to 'Pak law'. Will follow up. NoToApartheid.

The restaurant, for its part, insists this policy is out of respect for ‘Muslim sensibilities’ since its menu consists entirely of non-halal food.

Interestingly enough, those ‘Muslim sensibilities’ don’t matter when it comes to hiring someone to assist in cooking, serving and cleaning up after this non-halal food, nor is it something worth mentioning when looking for a bartender.

So what they’re saying is that it’s acceptable to hire Muslim/Pakistani waiters who will handle non-halal food but Muslim/Pakistani customers aren’t allowed, and this is their way of respecting us?

The owner, Philippe Lafforgue, even went through the trouble of emailing Almeida, ending with words,

“By the way this weekend I was reading the ads in the newspaper and all the ads for renting houses in Islamabad were for foreigners and multinational companies only. Swedish villas in Lahore are only rented to foreigners. They refuse Pakistani people. The International club in Lahore and Sindh Club in Karachi do not accept Pakistani people, even as a guest. If I go to the Diplomatic Enclave, all I’ll have to do is show my passport. Whereas you will have to get a ticket, pay the fees and go by bus. The guest house right close to mine is reserved for Chinese people only. I will stop here because I don’t want to waste your time. But yes, there is a lot of discrimination in this country. But I don’t…”

(This excerpt was edited for readability)

After reading this, I was reminded of a time when it was acceptable in this part of the world to say:

But I guess you can’t say it in those words anymore since there are ways to get around such technicalities.

Also, since when did ‘Pakistani’ become synonymous with ‘Muslim’?

How does possession of a dual nationality make a difference if they are in fact Muslims? Where do the ‘sensibilities’ fit in in such cases? When did they start making exceptions towards racism depending on who you were discriminating against?

I realised how factual and spot on, Lafforgue and some of my friends’ words were. Pakistanis really aren’t allowed in the Diplomatic Enclave of their ‘own’ country and entire chunks of our provinces effectively belong to either militants or foreign corporations. Meanwhile, a more subtle form of colonisation quietly makes its way through our culture.

Our repeatedly revised history is just as murky as our future and we’ve learnt that things work out better for us if we just keep our heads low and plod through the confusion without asking too many questions.

Pakistani sovereignty is practically a myth, adorning our self-image like the emperor’s new clothes. We can’t really see it but the crafty tailors stitching together our official state narrative insist it’s there.

There are more than 180 million people living on this little strip of land we call home. If racism is widespread and if elitist oppression is rampant, does that mean we should stop no one from being a racist or an elitist simply because we can’t stop everyone?

Does that mean people that who are minimally affected by the status quo (people who already belong to the elite or as in this case people who have that oh-so-coveted proof they are ‘good enough to not be a Pakistani’) can joke about how amusing it is that the rest of us call such things unfair?

Is it okay for us to dismiss such discrimination simply as a part and parcel of being ‘ordinary Pakistanis’?

What were the struggles of the independence movement if not to allow us a chance to live free and not be treated like squatters in our own homeland? Where is the country that supposedly resulted from this?

Where is my Pakistan?

A college student who is interested in social justice, health and education issues, literature, internet technology and other geeky things. She is proud to be a Lahori, enjoys good food, a sense of humor and tweets as @Sarritorialist (twitter.com/Sarritorialist)