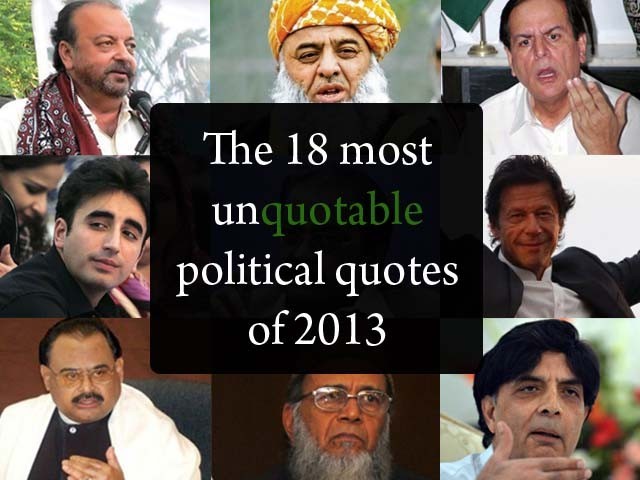 I could see improvement in politician’s behaviour and they have stated owning their statements.

Last year, our nation went through many a tragedy. From being held hostage by terrorists to being engulfed by sectarian violence, the terror spree has gone on without any breaks.

In this madness, we have had our politicians providing us their ‘pearls of wisdom’.

While this year we have missed the late Pir Pagara, Zulfiqar Mirza, Pervez Musharraf, Rehman Malik and the like, who had given us truly memorably comments regarding national security in the past, I was still able to collect some quotes which managed to become top headlines.

Here is how our leaders and politicians have shared their valuable opinions on issues of key importance to Pakistan and its people.

On killing of the TTP chief, Imran Khan warned the nation and Pakistan Army against the Taliban’s tried and tested warfare strategy.

Imran Khan’s demand despite knowing the fact that Taleban in Afghanistan are fighting a war against external forces unlike TTP attacking Pakistan Army and own people.

“Dear burgers, sorry about Skype/Viber/Whatsapp. Excuse us while we catch some terrorists and save some lives. SMS for 3 months” – Bilawal Bhutto Zardari (Pakistan Peoples Party)

“Pakistan had won freedom from Britain in 1947 but our Karachi is still a colony of London. We’ll cut the kite controlled by phone calls from London” – Bilawal Bhutto (PPP)

Bilawal enlightens the youth on how Basant should be celebrated in Karachi.

“The TTP should be given religious ministries in the federal and provincial cabinets as a good will gesture.” – PTI Central Vice President, Mian Mukarram Shah  (PTI)

In an attempt to protect the nation from the wrath of Taliban, the PTI vice president came up with the remarkable demand of distributing religious ministries to the banned TTP group.

The interior minister, after a thorough research, claimed that the word ‘tamasha’ (performance) had been used 45 times during the last five years in the parliament and no one had objected.

“Those people who are protesting – and grandstanding – near Three Swords – I don’t want to fight or quarrel but if I order my supporters now, they will go to Three Swords and turn them in reality”. – Altaf Hussain (Muttahida Qaumi Movement)

The MQM chief warned his opponents to either accept the election results or get ready to face the consequences.

From Britain, with love

“Even Jinnah held a British passport and took oath of allegiance to the then British King, George VI” – Altaf Hussain (MQM)

The MQM chief reminded the nation about the passport carried by the father of the nation, giving a lesson which seldom history teachers ever impart to their students.

Agha Siraj Durrani concluded the debate by endorsing wedding receptions at the Sindh Assembly as no big deal.

A swift solution to all our problems

“Democracy has failed and martial law should be implemented in Pakistan.” – Syed Faisal Raza Abidi (PPP)

Terrorists, by invite only

“We did not invite Osama bin Laden to Pakistan, or even to Afghanistan” – Yousuf Raza Gillani (PPP)

“I’ll see how anyone arrests me. The NAB (National Accountability Bureau) chairman is himself summoned, how can he summon me?” Yousuf Raza Gillani (PPP)

“Nawaz Sharif was, and remains, my leader, as I hold him in high esteem” – Jawed Hashmi  (PTI)

Jawed Hashmi showed complete faith and respect in his ex leader, whom he left because he was not in agreement with his ideologies in the first place. Okay, now I am confused.

Munawar Hasan, chief of JI, gives the title of martyrdom to the TTP chief, ignoring the sacrifices of hundreds of Pakistani soldiers.

Of allegations and ideas

“Veena Malik is a bloody liar. Does she deserve coffee? I hate her.” – Shaikh Rasheed

“I think K-P government should resign on the failure despite having report of the exact date. I do not know what the K-P Chief Minister Pervez Khattak, this teeli pehlwan (thin fighter), was doing” – Rana Sanaullah – (PML-N)

These were the most unquotable quotes by our leaders in 2013 and each comment had its own entertainment value – irrespective of how repulsive they might have been.

This also highlights one very important thing – our leaders really need to start practicing the age-old advice of weighing ones words before speaking them. It would do them well to follow it.

Correction: This post previously contained a picture of Mukarram Khan, a journalist from FATA. The mistake has now been rectified. The error is regretted.