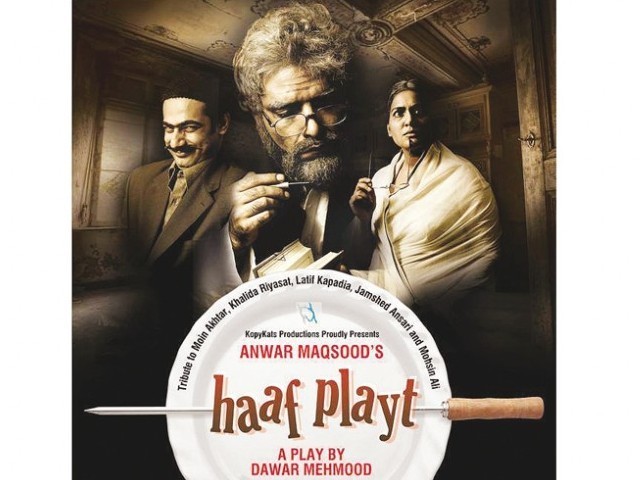 As with all Anwar Maqsood’s plays, Haaf Playt is sprinkled with satire based on the current situation of Pakistan, along with the story of the nagging wife and the carefree husband. PHOTO: FILE

I would choose to watch a good theatre play over a movie any day. The choice becomes even easier when the play happens to be Anwar Maqsood’s. His plays are simply a treat to watch, especially after a long shift at work.

I became familiar with theatre in Karachi when I started working for a TV channel and got my hands on free passes for a musical. And boy, was I glad that I did. The venue turned out to be incredibly crowded and I could only find a place to sit on the stairs, which I ever-so-happily accepted.

By the end of those 90 minutes, all that mattered was that I had gotten an opportunity to watch an absolutely rib-tickling play which left my jaws hurting.

No, I am not kidding, it was really that funny.

Having been born in the late 80s, I had only heard about the ‘great’ TV shows from the 80s and early 90s – shows like Aangan Terrha, Haaf Playt or 50/50. My mother had always raved about these shows and when I started working at the TV channel, my senior colleagues could not stop talking about them either.

I had ignored my mother’s praise for these shows all these years because well, she is my mother. But my colleagues’ apparent admiration and recommendation was enough to make me want to get DVDs of the shows immediately.

However, before I could do that someone told me about Haaf Playt – a theatre play based on the original drama and I thought I would give it a try.

And I am so glad that I did.

Although the actors are young and not as experienced as our legendary actors, their performance was delightful. Photo: File

Although the actors are young and perhaps, not as experienced as our legendary actors, their performance was simply delightful. The constant hubbub of laughter and claps inside the theatre as well as the well-deserved applause at the end of the play, was a testimony to the audience’s enjoyment.

I was not only impressed but simply awe-struck since there was not a single flaw in their acting, coordination or timing.

Haaf Playt is based on a husband-wife relationship, where the wife constantly complains about their poor financial condition and urges the husband to find a better job than being a columnist for a newspaper. It is quite obvious that being an author or journalist and that too for an Urdu newspaper is not very lucrative and thus, does not amount to much in ‘modern’ times.

Haaf Playt is based on a husband-wife relationship, where the wife constantly complains about their poor financial condition. Photo: File

This seems ironically amusing when you think how Anwar Maqsood uses the Urdu language with such finesse in his plays. His dialogues seemed to fall on my ears like Bach’s symphony – such was their beauty.  This, combined with the humour element in the play, just made it an even better experience and I was left wiping away tears of laughter.

Be warned that the humour is a little ‘out there’ but then, we were all adults there and could laugh it off in good faith.

As with all Anwar Maqsood’s plays, the story of the nagging wife and the carefree husband is sprinkled with satire based on the current situation of Pakistan. I find that these jokes never get old and in fact, it helps make an otherwise dismal situation a tad amusing, even if it is temporary.

Anwar Maqsood’s plays are a treat to watch. Photo: Publicity

I cannot help but share some dialogues from the play here. This is a conversation between the whiny wife, Bano, and her happy-go-lucky husband, Iftikhar:

(Half the dowry that I brought has gone.)

(Half of the Pakistan that Quaid-e-Azam gave us has gone too.)

And then there was the conversation between two long-lost cousins.

(When uncle visited Canada, he told us that you are not doing so well.)

(He must be talking about all Pakistanis.)

These were just a few examples of the entertaining evening it could turn out to be if you took out the time to go watch this brilliant play. For those 90 minutes, I bet you will forget every problem in your life – big or small – and enjoy each moment to the fullest.

Don’t trust me? Go and find out.

A masters in International Relations from the University of Karachi, she is currently working for a media group and tweets as @SeherSami (twitter.com/SeherSami)