So many Hindu and female doctors! What is happening to Pakistan? 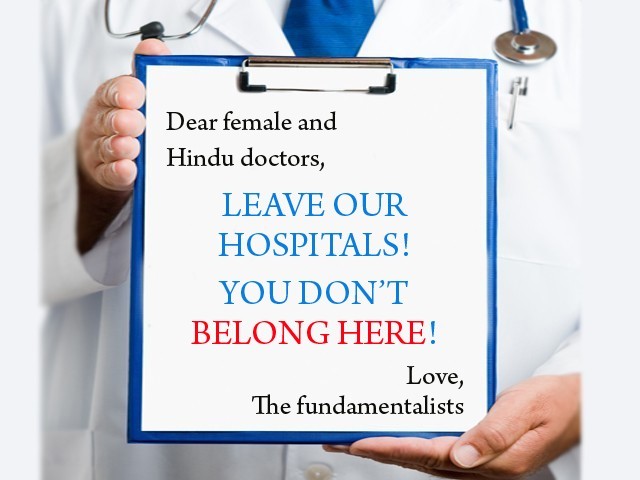 I know fundamentalists who think that since Pakistan was made for Muslims, those who are not Muslims should not be allowed to have jobs (unless there are no Muslims available, as for instance in jobs like cleaning up lavatories).

There are some things you can’t help doing – like talking to fundamentalists. I know many of them and almost all of them are convinced that non-Muslims want to harm Muslims.

One such person, whom I have known for 25 years and who can’t compose a simple sentence in English (despite having two master’s degrees) thinks that since Pakistan was made for Muslims, those who are not Muslims should not be allowed to have jobs (unless there are no Muslims available, as for instance in jobs like cleaning up lavatories).

This man is deeply concerned about the growing number of Hindu doctors in Karachi’s hospitals. He can’t believe that Hindus are more studious than Muslims. He thinks Hindu students get more marks than Muslims in the province because the examiners in colleges and universities are all Hindus. I did some research on this and found that Zulfiqar Ali Bhutto once imposed an annual quota on the number of Hindu students allowed to be admitted in medical colleges, to reduce the growing number of Hindu doctors in Sindh.

Strangely enough, it was Ziaul Haq who revoked the quota system and restored the original merit system, whereby only the highest-scoring students are allowed admission (irrespective of their religious affiliation). But, of course, my fundamentalist friend is still convinced that there is a deep-rooted conspiracy to fill Sindh’s hospitals with Hindus.

As if one conspiracy wasn’t enough, I got a call the other day from another fundamentalist, a fellow Memon, 75-years-old, with three wives. He’s been running a hospital for a few years now and he’s deeply disturbed at the growing number of female doctors.

“Can you help me draft a petition to the authorities to reduce the number of female students in medical colleges?” he said.

I told him I have no problem with women doctors, in fact it was a female cardiologist who put two stents in me to get my heart back into shape.

“Do you know that if this continues, there’ll be very few male doctors around after a few years?”

So I again did some research and found that he was right. It seems that there used to be a quota system which allowed only a fixed number of girls becoming doctors but the High Court ruled that it was discriminatory (correctly, in my opinion). Girls usually devote much more time to their studies than boys (who usually roam around the streets, looking at girls), and so girls do better.

Of course, this is one of the good things happening in Pakistan, even though for the moment it appears to be confined to Sindh. My fundamentalist friends, however, think it’s another conspiracy by the Indo-Zionist lobby to make Pakistan weaker.

I asked them why they object to women becoming doctors, since they are the ones who’ve always been objecting to women being treated by male doctors. One fundamentalist said women would never become sick if they remained in their houses all the time (meaning that women should not be allowed to work at all).

“What about women who’re pregnant or who are on the verge of giving birth?” I asked.

“No problem”, say the fundamentalists, “there are nurses and midwives who can look after them. In fact there were very few doctors in the country not too long ago and no hospitals either, and women gave birth in their houses.”

How do you argue with such people, who are increasing by the day and who should have been born a hundred years ago?