My life… or a poorly scripted story? 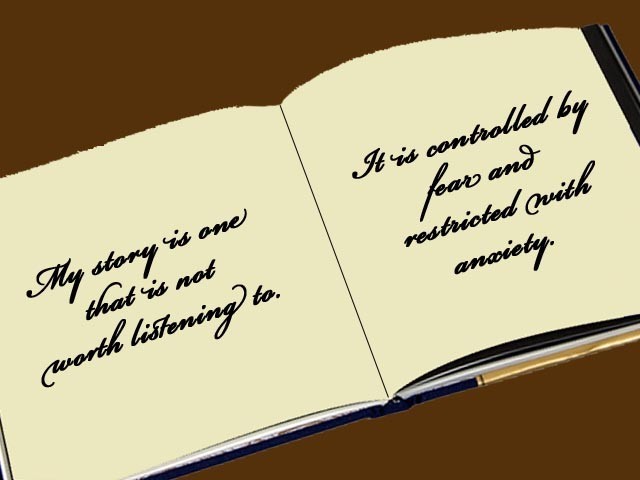 There are no paragraphs, for there is no transition – similar to a violin bow being dragged across a string for a single note, which nervously glances at its master, waiting for him to introduce a new sound before it reaches to its end.

My story is one that is not worth listening to. It is poorly scripted and lacks punctuation and depth. It lingers on too long and then stops suddenly, as if looking for a new introduction to an already spoiled plot.

It dies too often or does it sleep? I do not know. It becomes dormant so it could be either.

Its commas occur once too often and the colons, which are otherwise latent with the charm of novelty and surprise, act as full stops. Its full stops end half-lived sentences which miserably rise and fall, full of verbs which do and die, parted too long from their adverbs.

The adverbs themselves are barred from the confines of this page by the black and white scenery of inaction and lethargy.

Conversely, its adjectives do exist but there are no nouns. Hence, in the story the adjectives roam the drab scenery like colours begging for a blank canvas – the beggars of the page in search of their lovers – things that they could define…

But those nouns do not exist.

There are no paragraphs for there is no transition like a violin bow being dragged across a string for a single note, which nervously glances at its master waiting for him to introduce a new sound before it reaches its end.

Hyperbole is carefully kept beyond reach and the innocent wanderings of desperate adjectives used to beautify the dreadfully boring and ordinary existence of things, are not only thwarted but discouraged through violent monotony. This makes the descriptions dreary and frightful for they tell the reader things as they are; not in their essence or perceived emotion but in their awful accurate reality.

There is no climax, only bursts of deluded enthusiasm that rise to the level of maddening passion but are unable to maintain that level. They find themselves on the poorly built scaffold of anxiety and self-doubt. Its sentences, unthinkingly, obey other sentences; sentences that are correct in their structure but poorly phrased in their essence.

Its conversations are bound by inverted commas but the speech it contains is not its own. The speech is written elsewhere, in other stories, by other people, thus making the singular mode of expression, of its character, crudely phrased and skilfully borrowed.

How unlucky is the character!

The presentation is untidy with words scribbled and corrected in quick, relentless successions. The vocabulary is monotonous and pretentious, a translucent screen failing in its attempts to be opaque, so that it may hide what lies behind it. It is entirely shallow and without meaning, a fault that stems from the writer having given it a title and purpose even before its initiation.

However, the end of the story, which takes us to the deathbed of our character, gives birth to the only genuine juxtaposition in the entire passage. It takes the story from dreary descriptions and dry climaxes to a single line of speech from our now physically frail hero. It has no punctuation and it has no structure – the vocabulary is simple and true…

… And so is the sentiment.

It happens as the already dead character rises from his bed, throws himself to the floor and murmurs,

“They made me fear falling so much… I stopped walking.”

An A-Level student from Rawalpindi who is interested in writing on a variety of topics.