Weddings in Pakistan: Down with the dowry, enough with the spending! 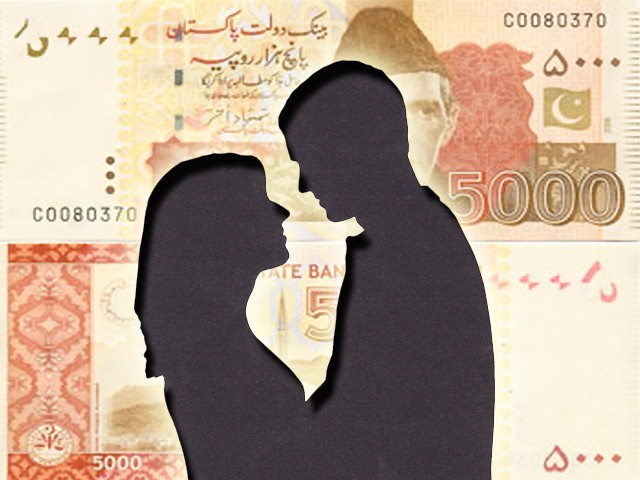 The society as a whole fails to realise that the money spent on weddings would be better invested in improving living standards, education, health and the overall well-being of the family.

An often ignored reality that has plagued Pakistani society is that getting married is a financial nightmare.

Marriage in our country is an occasion for insane displays of spending on outrageously lavish valimas, mehndi banquets, jewellery, give-aways, dowry and similar acts. What is interesting and downright appalling is that all classes of society are guilty of this madness.

Our upper-class uses the occasion to show how wealthy they are. The middle-class, as always torn between the echelons of society, tries its best to spend as much as it can and register itself within the upper-class so as to feel accomplished. The poor take out the money from their children’s education, health and everyday basics of life to cover nonsensical marriage expenses.

It is not hard to find instances in Pakistan where a poor family saves money for years to marry off a daughter, when only a portion of this money would have been sufficient to send the kids to school, buy them books and invest in their future.

Recently, I did a small survey in my native village and compiled statistics of the expenses incurred on recent weddings in the village.

What I found was an astonishing trend.

A family, where the combined income of father and son was Rs60,000 spent more than Rs800,000 on dowry, clothes, give-aways and various functions related to their daughter’s wedding.

In another instance, a poor farmer in the village married his daughter to another farmer’s son and bore wedding expenses of Rs150,000 – most of which was borrowed from relatives or contributed by someone well-off.

Another old man married his son who was a taxi-driver to another man’s daughter – of similar financial stature – and bought gold worth Rs150,000 for the bride. He incurred additional expenses on arranging the ‘customary’ functions. The money was again borrowed from relatives and friends.

The social behaviour exhibited in these examples reflects a bizarre and anomalous condition in our society – all in the name of traditions and customs. Spending such huge amounts of money on a wedding just does not make sense in a country with poverty figures such as ours.

Marriage – the commencement of a new and beautiful relationship – is unfortunately often marred in Pakistan either by the scary repercussions of a family’s self-esteem blown away with the burden of donations or by going bankrupt and plunging themselves into financial debts.

The reasons behind our irrational spending on marriages are obvious.

Long established traditions of wedding functions and obligations of giving jewellery, dowry and give-aways has created a standard on which each family tries to excel more than it actually can. People fear being mocked by society if they fail to spend ‘enough’. More often than not, this forces them to spend more than the resources they have.

The society as a whole fails to realise that the money spent on weddings would be better invested in improving living standards, education, health and the overall well-being of the family.

Just imagine the on-going benefits if the same money that a poor father spends on his son’s wedding was spent on starting a business for the son or if the son saved the money for occasions such as childbirth, health care and children’s education.

The irony is that although most people do realise that this behaviour is a social anomaly, we all seem resigned to it and no one bothers to fix it. Everyone talks about the problem but no one actually does anything to help society put an end to it. There may be the occasional sermon in a mosque on not having extravagant weddings and the elderly in the family do tell their children to be humble in their lifestyle, but very little is actually done beyond the verbal discussion.

In effect, our society seems paralysed without any clue on how to change this terrible system.

So what we ought to do if we all realise that the spending trend in our weddings is nonsensical?

I think that the first step should be to try and gradually avoid some of the expenses that make our weddings such a financial ordeal.

For starters there is at least, one certain expense that the men in this society can actually refuse only if they could muster up the courage – a rebellious stance to completely refuse dowry from the bride’s family irrespective of how much they insist.

Who else, other than the man getting married, is in a better position to stand up against the heinous practice of dowry?

After all, with the custom so deeply entrenched in our society, neither the girl nor her family could ever propose a dowry-free marriage. It is the guy who is the receiver of dowry and hence, it is only him who can take a stern stance against it.

Putting an end to the custom of dowry might prove to be the first step in cutting down other wedding expenses.

If a man stands his ground against receiving dowry, then the bride and her family would also have to be rational enough when demanding jewellery from the groom’s side. This will help save money for matters of far greater importance than outrageous functions, jewellery and furniture for the groom’s entire family.

Having said that, it is unfortunately not that easy to change long-standing traditions in reality. In effect, this will entail standing against both the families because everyone here is tied up in notions of trends, traditions and social pressures, and no one in either family would agree to a dowry-free marriage. The classic argument is,

(We’re giving it out of our own happiness)

(We’re just giving a little bit to our daughter)

Giving less dowry is of no good either as it doesn’t act upon the message that there was no dowry required in the first place.

The snake of dowry is still alive but just fed less.

The idea is complex but fairly executable. If we don’t start today, this anomalous social behaviour will keep haunting us and our coming generations. All that is required is for both the families to sacrifice their social harmony temporarily for the sake of the greater good. The rich and the educated men, particularly, bear more responsibility as they are the ones who set the example. There is no message to be followed if a poor family spends no money on a marriage. A message is only given when you have a lot to spend and you choose not to.

The fear of the backlash from the families in the beginning is undeniable. But believe it or not, once the dust is settled, everyone around us will appreciate us for sparing them the money they were about to waste on things that do not essentially matter.

Imagine the day when all you need for a marriage is a happy couple and two happy families without the fear of arranging dowry or any money for their joyous day.

In an age where most of us dream about a changed society, very few take tiny but pragmatic steps to bring about and be a part of that change.

A PhD student currently based in Europe. A social worker affiliated with several international youth organization. Founder of Nojawan Pakistan, a volunteer youth organization aiming to help education of the unprivileged Govt schools in Hazara Division. He tweets @RizwanMumtaz (twitter.com/RizwanMumtaz)

Ronaldo won the Ballon D’Or but Messi deserved it!