An oracle’s predictions for Pakistan 2014 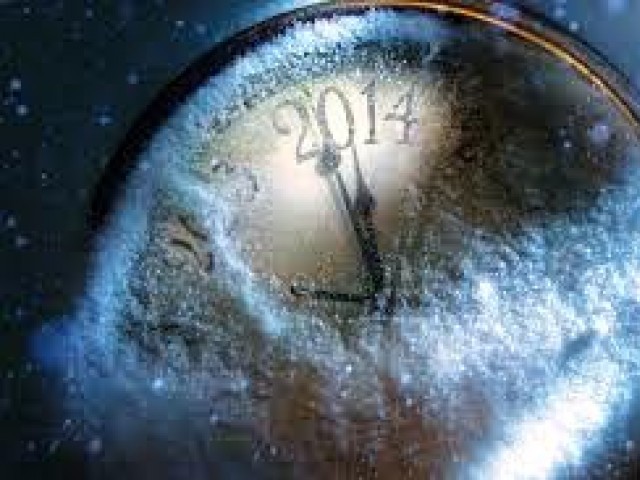 Time itself does not beat a gong to announce the passing of an age. It is we who herald change by our life, our conduct, our work. PHOTO: Reuters

On a recent trip to Karachi’s Hawks Bay beach, I was taking a walk and thinking about the past year. There were some highs and lows, both on a personal level and for the country. In all respects it has been an extraordinary year.

The country went through a massive election and witnessed a peaceful change of guard in the political spheres. It also saw the meteoric rise and then farcical irrelevance of a major political party while another came to terms with an ever changing post-election scenario.

There were pockets of good news followed by disheartening reports of attacks, economic issues amid promises of a utopian Pakistan by the powers that be. There were personal highs and lows too, snippets of happy news juxtaposed by moments of deep grief brought about by national events and deaths of young family members.

In the middle of my reverie, I chanced upon an astrologer.

Wild and unkempt in a Kiplingesque way, he yelled that he was a true fakir, a follower of Bulleh Shah and could see that I need help.

Surrounded in a mist of acrid smoke from a sputtering fire and what seemed like home-made cheroots, playing an ‘ektara’ with a few stray dogs for company and perched on the decaying patio of a derelict beach house, he looked every inch like an avatar of the Delphic oracle.

Promising to open the doors to the future he got up and did a little shimmy to prove his ‘spiritual’ credentials.

The man was obviously a charlatan but his sing-song plea and notions of grandeur pricked my curiosity and I agreed for to let him tell me my future but more importantly reveal the mysteries for the country.

Our “sabzi” team will continue to frustrate and bewilder…

“Baba, tell me about the vagaries of the one unifying force in Pakistan; the Pakistan cricket team.”

“My son that is a very difficult question. You see even the stars themselves cannot comprehend the workings of something so complex and I need an offering to coax the spirits to yield their knowledge.”

As all Pakistanis I was curious and the transaction successfully completed he plunged on.

“The green team will continue to frustrate and bewilder…”

I interrupted to clarify if he was saying sabz (green) because it sounded like sabzi (vegetable).

“My son I was saying sabzi, the sabzi team will be as inconsistent as the prices of the tomatoes and onions, sky high one day and lower than a politician’s morals the other day. Young players will make their mark only to be swept aside and occasional brilliance of a bearded one which will mask his overwhelming and frequent failures.

The dunce, no don’t interrupt, I don’t mean professor, I do mean dunce.

He will still be around blocking the way to success and the aged one will play on and on till the sea turns to salt and the Almighty ends it all.”

My queries somewhat satisfied I moved on to our national pastime, politics.

Politics: The more things change, the more they remain the same…

My queries somewhat satisfied I moved on to our national pastime, politics.

“Ah you want to know about power. Well there are new faces in the corridors of power, different ones wearing stars and robes, and living in the white palace.

Much is expected but beware, the more things change the more they remain the same.

However, there is expected peace across the eastern border. The estranged brothers will unite and we shall have a great coming together of voices for the coming reunion. Many will oppose this, yes many who rely on hate and prejudice to earn their way, but the voices of the people shall prevail and we shall soon revel in what joins us, rather than waste time on what keeps us apart.”

I was starting to relish this and moved to my other concerns, the power crisis, electricity and security.

Bijli, kapra aur makkan: The lines of people around those gas things will get longer than a mullah’s beard…

“My son you do test the spirits. Yes bright words from the powerful are marred by dark nights and there is little succor for the people. Seeds of hope are being laid by the young, the bright and honest. There is work being done with neighbours both who look like us and the yellow ones, and I am hopeful that with this new found peace with our old friends, and new, we will be able to see the seeds flower into fruitful trees.

There are those who are trying to harness the very waters, the riches in the ground and the forces of creation to create power but it remains to be seen whether the disruptive forces will let this go through. I can promise you that cooling your home in summer and warming it in winter will be much more expensive than before and the lines of people around those gas things will get longer than the river indus.

The ones who deal in blood and death will continue to do so as long as there is confusion about the means of tackling them.

Those who can are dithering will cause the most harm and certain forces will refuse to even label them as killers and disrupters of God’s peace. Until one gets justice for the weakest and everyone is allowed to live their life there will be unending strife. My son, a great thinker once said that a nation can live without religion but cannot survive without justice and tolerance.”

Moved, I asked him about the state of education.

“There is some good news there. New institutions are coming up and many old ones are opening doors to unexplored realms of knowledge. We were under the impression that studying one area in isolation is best but true knowledge and prosperity comes from the understanding of how it all interconnects.

I know of at least one such centre of knowledge that is starting next year and the makers are friends of the nation and have a name to go along with that. Meanwhile our students at the junior level will continue to astound all with their achievements. I pray for a day in which they stay here and work towards a better Pakistan. Perhaps the winds of change in education will sway their sails and anchor their boats on our shores while others also look to cross the seas to flock back to the motherland.”

The incandescent orb in the sky was touching the waters and it was time to head back.

My last question was about my own life in the coming year.

You will find love, riches, fame and fortune but it is like this dust if it does not make you a better person…

“Your life is inseparable from the life of the people and the nation. You will prosper if the nation prospers, your hopes and wishes are intertwined with the prayers of the multitudes and even though you will face success and failure it will not be in isolation.

You will find love, riches, fame and fortune but it is like this dust if it does not make you a better person. Yes there are challenges but they are not insurmountable and remember that each day and each year carries its own hope.

And remember, love others and stay generous.”

I thanked him and walked away, humbled and chastised.

A mendicant had summed up what the talking heads on television cannot do in dozens of shows. The coming year has new challenges and many old ones. Time itself does not beat a gong to announce the passing of an age. It is we who herald change by our life, our conduct, our work.

As I trudged off in the deepening gloom I could hear him sing.

The waves drowned out some of the words but the winds carried his voice clear:

(Talk to me with a smile

You live in my heart

And yet you beguile me

I am charmed with your name on my lip

You try as usual and give me a slip