A conversation between Ghalib and Iqbal 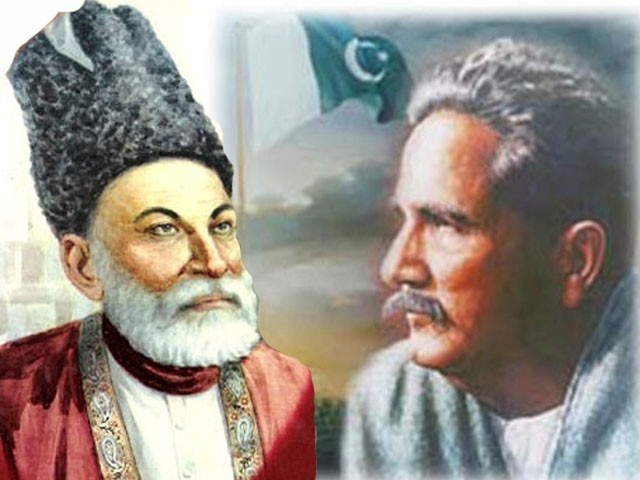 Once upon a time, a Pakistani who also happened to be an Urdu literature lover, was travelling from one city to another somewhere in the northern areas of Pakistan. Throughout his journey, only two books were his companion – Deewan-e-Ghalib and Kalaam-e- Iqbal.

During a long bus journey, his tired and weary yet over-imaginative mind was in a half-sleeping and half-dreaming state. In this trance, he found Ghalib and Iqbal sitting in the seats right next to him talking to each other, completely oblivious of his presence.

This is the conversation that ensued between these two great Urdu poets:

“Aah! Look at those beautiful mountains and lush green valleys. If you remember Ghalib sahib, I had once said,

(Your abode is not on the dome of a royal palace,
For you are an eagle, destined to live on the hard rock’s of mountains)

“You are right. Muslims have a short memory Iqbal sahib, especially when it comes to what their elders said. By the way, last week I was in one of your big cities for only three days. Trust me, there were times when I felt,

(It is time to now go somewhere and live where no one resides,

Where neither there is someone to talk with, nor someone to understand the language)

The city was over-crowded and literally seemed to be bursting at the seams. But no one really seemed to care about the next person. People seemed to be too busy in their own ‘cocoons’ – in their self-created world. I was surprised to see their selfish ways and found them to be quite similar to our cities back in India as well.

The world has changed Iqbal sahib and not for the better I think.”

“That is so true. If you look at any city today – big or small – people seem to have become more and more materialistic, corrupt and selfish. Yet, in spite of being so self-absorbed, they seem even unhappier.

They seem to have forgotten the very reason that this country was made for. I wish they could share the dream I had for this land.

(Give piercing vision to those so deprived of sight,
Show to others whatever I have seen)

I was dismayed to see that instead of being concerned for this ailing country, the younger generation is busy with their own petty love stories, political feuding and worst of all, malicious practices and propaganda against each other in the name of religion.

Yesterday, I went to pray at a mosque but there was a group of young men outside, who asked me,

‘Are you Sunni or Shia?’

“Hahaha! I was pulled aside in a crowded market once and asked to lead the prayers since a group of people missed the congregation prayers in the mosque. My beard must have given them the impression that I was religious. But then they found another person right there with a beard that was an inch longer than mine and thankfully they let me go.

I personally think that our youth is frustrated because of a lack of opportunities and corruption. Unfortunately, they are all too aware that there is no future for them even if they manage to get an education somehow. There are no employment opportunities without having influential contacts and sources.

In such a situation, what else can be expected?

(Threatening as love is, there is no deliverance from the heart,

I find it sad that we, the early generation, failed to establish corruption-free systems and now the youth have to reap what we sowed.”

“Hmmm, perhaps you are right Ghalib sahib. But I do not understand how and where we went wrong? We were on the right track when we started but then I do not know what happened.

(The whirlpool mourning, eyes weep for that lost wave,
Born of the sea and yet never to reach the shores)

Do you remember how jubilant we were when we succeeded in our struggle for a separate land – the land of the pure? We forgot all our personal sorrows and sacrifices because finally, we had the most important thing – our Pakistan.”

“Not just Pakistan Iqbal sahib, look at India as well. Things are not very different there either. Basically I think that all of us forgot everything and celebrated too soon. The euphoria of driving the British off our soil put us in that toxic state of a high where we forgot the very reason we drove them out in the first place. Perhaps, this sense of elation affected the whole nation like sweet, slow poison. And now we complain about corruption, poverty, unemployment and religious chaos.

I find it so sad that every other educated person wants to migrate to the US, UK or Canada to earn a decent living, realise their potential and live a better life.

(There is now in this town, a famine of the grief of love, Asad
We have agreed that we would remain in Delhi – but what will we eat?)

Oh! That reminds me, have you filed your immigration papers for Canada yet Iqbal sahib? What happened?”

“I did get a call from the authorities. My papers have been accepted and soon I will be off to Canada for good. They have decided to open a research university based on my philosophy and teachings. I guess that is the only way to keep myself sane and express my ideology without fear. I can no longer change my opinions just to please the ‘religious scholars’ here and I know that the west will listen to what I have to say with a more open mind.

After all, how many times can I write Jawab-e-shikwa?

(Though beneficent I be, I am of hand yet free,
What can the burning flame bestow, except its spark and glow)

So, what have you decided Ghalib sahib? I guess the extremists – be it Hindus or Muslims – are not too pleased with your ideology as well. You have always talked about the need for peace, harmony, love and oneness of all humanity and this message is nothing short of ‘blasphemy’ in these circumstances.”

“No plans really Iqbal sahib. All my friends like Meer, Momin, Haali, Sauda, even the young lads like Faiz and Faraz have left for greener pastures. I think I will also decide within the next few days. I have invitations from almost all the countries in the west.

(The steed of lifetime is in motion, let us see where he might halt,
Neither is the hand on the reins, nor is the foot in the stirrup)

I do not know what His plans for me are but I do know that living here has become a nightmare. How long am I supposed to stay silent?”

“Hmmm, I know what you mean. I will miss this land and some sincere people no matter what. But the situation over the last few decades has become such that I have not been able to sleep at nights for a long time.

(So many nights of my life wasted in the same old conflicts,
Sometimes the ecstasy and melody of Rumi, other times confusion and dilemma of Raazi)

Not saying it the way it is in fear of displeasing the religious lords and politicians just isn’t my cup of tea.”

“Yes, I feel the same. I really do not know how I will live away from my beloved Dilli. But as you said, it is important to express what is in our hearts and minds. Sometimes I seriously feel that it was all a waste.

(When nothing existed, then God was there; had nothing been, God would have been,
My own being has defeated me, had I not been what would have been?)

Well, nothing except Allah.”

And suddenly, the ‘true’ Pakistani – that poor Muslim (not a Sunni, Shia or any other sect – just a Muslim) Urdu literature lover snapped out of his weird dream and looked around the bus in embarrassment.

However, all the passengers were busy looking at cricket scores and listening to cheap songs on their mobile phones.

This ‘true’ Pakistani was last seen somewhere on the streets of America.