Women are responsible for domestic abuse, not men 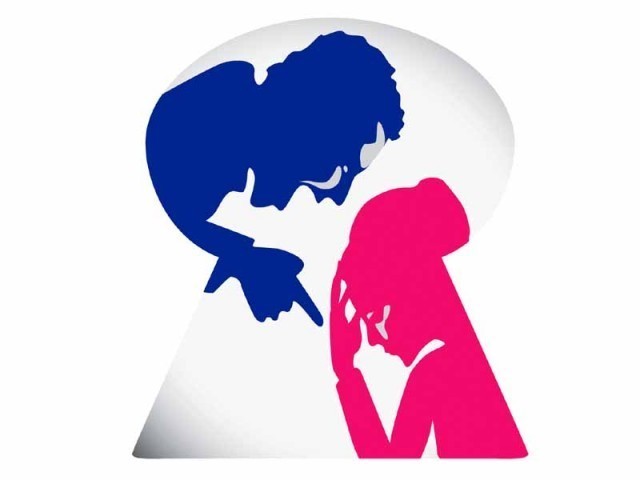 My neighbour, sister-in-law and best friend all get slapped as well and they never complain about it. PHOTO: FILE

It’s an age old story that women are the main victims of abuse. Over the years, many NGOs, awareness projects and feminists have forced laws to be passed against female victimisation. We have all blamed men for abuse, who are seemingly the dominant sex and similarly, many steps have been taken to make women realise that it is the men who are at fault.

So, why then are women still subjected to abuse, even though they are aware of their rights and are more liberated than before?

Why are they not raising their voice against domestic abuse?

And also, are men really the main cause of abuse?

These questions need to be carefully deliberated upon.

If you turn on the television, you would see dramas depicting domestic abuse on different channels. This is because the producers of such shows know that most Pakistani women – regardless of their class backgrounds – would relate best to such situations.

There are many reasons why abuse is still prevalent in Pakistan. These reasons range from the wicked whisperings of ammi jaan and her bickering, to the husband’s own misplaced anger and frustration.

However, the root cause of abuse, albeit any kind, is just one. Women, from a very early age, are socialised with the idea that being hit by a man, or being abused at home, is a natural ordeal that they have to go through, no matter what. This idea is ingrained in them.

Hence, most women do not cry out in protest to this victimisation. They think it’s normal to get beaten up by their husbands or be mistreated by other people in the household. Perhaps this is also the reason why our media does not create much hue about it – the cause is so subliminal in nature that many people miss it.

You don’t agree with my assessment?

Well, here are a few examples for you to understand my view better.

While a child stands in the corner and watches her parents fight, she unconsciously learns about the powers spouses have over one another. When her father strikes the mother, slaps her right across the face and stomps out of the room, the child understands who has the upper hand.

The next day, the parents seem to have resolved their problems and hence are back to acting like a normal couple. However, just because they are acting normal now, it will not undo the effects on the little girl’s mind from the previous night. In fact, it only reiterates her observation – that your husband hitting you is a forgivable act, as long as you can patch things up and revert back to being a ‘happy’ family.

Now imagine, for instance, that a son is born in the same family. He grows up and enters his childhood phase.

One day, when he breaks a window in the house while playing cricket, his mother scolds and reprimands him,

(Just wait till your father comes home. I’ll tell him and then you’ll see what he does with you.)

This threat is repeated multiple times in that child’s life and it is usually used to scare him into submission.

Now, when he grows up and gets married, he would believe that it is his duty – or his right – to be the scary, dominating father, whose children can only respect him if they are afraid of him. Such ideas make men want to become stoic and stern, both with their wives and children, to establish their supremacy.

Even though now, with changing times, fathers have become more loving and less severe in their demeanour, there is still a part of them which is distant and reserved. They do agreeably spend more time with their children and are more in tune with what they feel, but the distance between father and child is still present.

This distance is present because the father wants to maintain his right to discipline his children, and even his wife, if the situation demands.

This idea is prevalent in every strata of our society, in larger or smaller proportions.

Getting out of the bubble we all live in, we need to cast a look upon every Shumaila, Bano and Rani who works in our house. They are the real victims of abuse and have been through an even more intense male-oriented socialisation than we have.

What stops them from raising their voice?

It’s the same logic; the image of their employer being pushed around by the husband or mother-in-law. These domestic workers think that if educated, seemingly independent women can be abused, then what chances do they have of getting out of this vicious circle?

Why should I complain if I’m slapped a couple of times a day? My neighbour, sister-in-law and best friend all get slapped as well; they never complain about it. Then why should I?

And like this, the dominoes keep falling, women by women. We accuse our husbands, fathers and brothers for abuse but the real perpetrators are women themselves, who indirectly support this idea and hence are the main reason why such practices remain rampant in our society.

So when you see your daughter being hit by her husband, don’t think that you got her married in the wrong house. It’s not the husband’s fault, it’s yours. You should regret the time when, all those years ago, you covered your own bruises with some foundation and didn’t say a word against your husband’s tyranny. Your daughter learned to stay silent from you.

Similarly, when your son hits his wife, it’s really not his fault. It can all be traced back to the moment you told him,

“No beta, it’s not Baba’s fault; I did something wrong.”

Even though he was the only one smart enough to care and question you about the slap, you made him believe that husbands can beat their wives if they do something wrong.

Also, remember when you portrayed his father as some sort of tyrant, who could do whatever he wanted to in his house? Yeah, time to reap what you sowed.

An aspiring journalist with a level of patriotism not found in most 15-years-old.

Dear Bisma, you will be forgotten and there will be more like you