Is Pakistan ready to pay the cost of a complete ban on smoking? 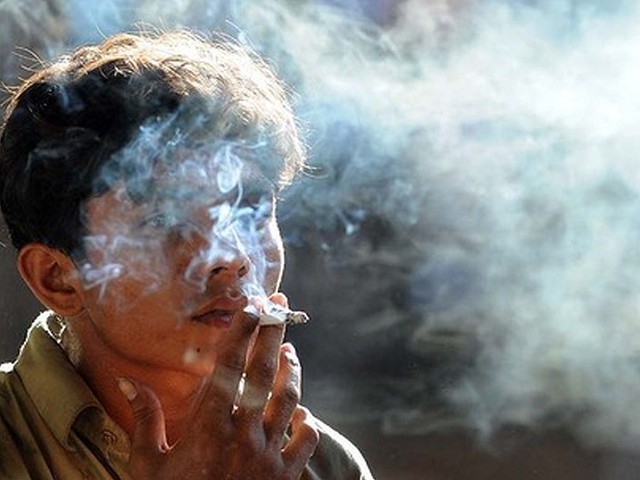 Although smoking in public places is banned yet violators are rarely penalised. PHOTO: AFP

The Pakistan Paediatric Association estimates that about 12,000 adolescents become addicted to smoking every day. If this seems like another passable statistic, let me confess that I smoked my first cigarette when I was only eight-years-old. Most of my childhood was spent in an environment clouded by thick smoke of the cancer sticks, yet I was always taught that smoking was bad.

The mind of a child can never grasp why something his male relatives indulge in so often can be harmful and I was no different. Not until I took up smoking in my late teens and observed examples of smokers who struggled with numerous health problems. But it was a moment too late and much to my chagrin, I’ve struggled to quit smoking until recently. I battle every day and still slip at times but getting back on track is how a person’s strength of resolve is tested.

Unlike marijuana that has been legalised in states like Washington and Colorado because of its proven medicinal benefits, there is an absolute consensus on the harmful effects of smoking the world over. Countries like Australia are gradually enforcing stricter bans on the growing and selling of tobacco by introducing standardised packaging and indelible health warnings that reduce its appeal to consumers. Britain has plans to go a step further. British Medical Association (BMA) has recently voted to ban smoking for children born after 2000. This has not yet taken the form of a legislation but the chances of that happening are high, considering it was the BMA that pushed for getting smoking in public places banned in 2002. The decision was reached after an understanding that mostly teenagers and young children make uninformed choices of getting into the habit of smoking that eventually turns into an addiction.

This seems like a far cry compared to Pakistan which may have anti-tobacco legislations but no regulatory body to implement it. Over 0.1 million people lose their life to tobacco related diseases annually, yet the Tobacco Control Cell (TCC) formed to discourage its use is working without permanent staff for the last two years. It provides ample evidence of the government’s callous attitude to the cause and explains the rampant tobacco use. According to a WHO report, Pakistan experienced a 30% increase of smokers in the past decade. Needless to mention, Pakistan Tobacco Company recorded 202% higher profits this year compared to the last one.

What is the way out of this quandary?

First and foremost, not just the TCC needs to be strengthened but anti-tobacco legislations should be implemented in letter and spirit. Prohibition of Smoking and Protection of Non-smokers Health Ordinance 2002 forbids selling tobacco to minors yet we see ‘khokhas’ and shops unabashedly selling cigarettes to school going children with impunity.

Proponents propose a blanket ban on tobacco similar to what Bhutan recently tried. Chewing or smoking tobacco has now become a punishable offence with up to three years imprisonment without bail in the absence of a tax and import duties’ receipt. This has come at the cost of an expanding black market where cigarettes are sold for exponential prices, as high as $2 for 10 cigarettes.

Is Pakistan ready to pay the cost of a complete ban on smoking?

We all know what happened when alcohol was banned. People adopted other alternatives; heroine consumption experienced a sharp increase and the black market for alcohol saw a boom. Irony is alcohol is still home-delivered quicker than food. Also, let’s not forget how the country had to face a cut in revenue generation through taxes.

Discouraging smoking and tobacco use is an inevitable need of the hour but it cannot be an isolated attempt by a single body like the TCC. An integrated, multi-faceted strategy has to be collectively evolved by and for all the stakeholders of the society. The legislature can legislate but its implementation has to come through sincere efforts of the executive. The civil society has to be mobilised to initiate mass campaigns educating public on the dangers of first-hand and passive smoking.

Although smoking in public places is banned yet violators are rarely penalised. Fines should be imposed along with heavy taxes on the sale of each cigarette pack. This will serve the purpose of discouraging people to buy cigarettes and also collect revenue for the government.

Under-age cigarette sale must be prohibited and adult smokers should avoid lighting one in front of children which can desensitise them to the notion of smoking. Some might think it is too late for them to quit but the least they can do is avoid a potential rise in young smokers. Above all, it must be treated and resourced as a prolonged strategy that requires persistent iron-will from all stakeholders to bear the long-term dividends of a healthy population.